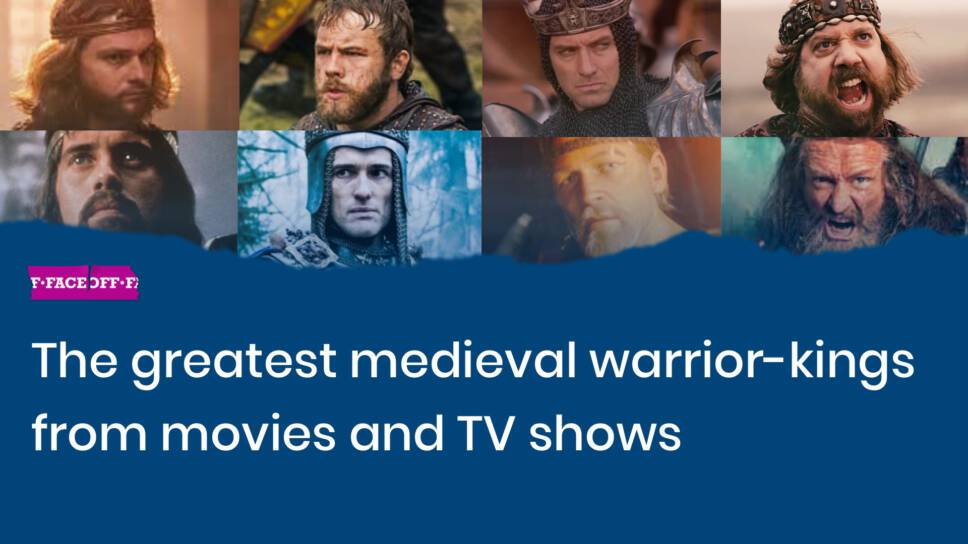 In this list, we honor the top warrior-kings from the best medieval TV series and movies with a royal showdown! Nowadays, Generals and leaders watch safely from afar as ordinary soldiers fight their wars for them, but many medieval kings put on armor, picked up a sword, and stood shoulder to shoulder with their men in the heat of battle. We have the top 12 most iconic warrior-king characters to ever lead their men to battle.

King Hywel (Steffan Rhodri) is possibly based on the real-life Hywel da, Historically, he was the king of Deheubarth, also known as ‘Hywel the good.’ In The Last Kingdom is shown as a courageous warrior-king. He is a capable warrior-king who could hold his own in battle. King Hywel was a key instrument in the ‘Battle of Tettenhall’ fought in 910.

He assisted the Anglo-Saxon armies of Mercia and Wessex to defeat the Danelaw Viking army of East Anglia. The Last Kingdom really assassinated the real-life King Hywel in season 4. This man was no fool. In reality, Hywel da is a welsh icon and hero, renowned for his great rule over the welsh people. Under the real Hywel da’s rule, no welsh noblemen died at the hands of Vikings, and no welsh land was captured. But perhaps he’ll get a second chance in TLK season 5 in The Battle of Dinefwr.

The Grand Prince of Kievan Rus.

Prince Oleg of Novgorod (Danila Kozlovsky) is one sadistic powerful ruler. He happily tortured his brother and made his other brother a dog. However, he isn’t crazy for the sake of being crazy. The prince is also cunning and manipulative. He’s very smart and he’s obsessed with power. Oleg wants the whole world. It’s a chess match and a very smart battle. Oleg is bound and determined to conquer the Vikings and Scandinavia, he has vast resources and military forces.

Chieftain Olav (Henrik Mestad) from the Netflix Norwegian satire Norsemen, rules Norheim with a steady hand. He is a wise Viking warrior, and a man of his word, highly likable by his people. Olav gets excited only when he goes on raiding the Saxons. Don’t mess with chieftain Olav! Unless he’s busy on the “shitting log” and you have a knife.

Edward of Wessex (Timothy Inne) is one of the main characters in the series The Last Kingdom. Many TLK fans have mixed feelings about his character. In TLK season three, Edward was far better as a war leader and in his tactical know-how and preparation. In season four, however, he is an irrational baby with zero war skills.

Edward can be quite infuriating for sure, but don’t hate him though. He’s only been king for about five minutes. He got the throne at a fairly young age and in a time of great turmoil. He still learns the politics of being a king. Plenty of medieval warrior-kings were total incompetent leaders.

King Edward isn’t necessarily bad or conning. He is just the product of someone in over his head trying to do what’s best despite lacking experience and being manipulated by his advisors.

Historically he was a very effective king. He and his sister Aethelflaed drove out more Vikings than King Alfred. I trust The Last Kingdom creators to make him a badass warrior-king as he matures.

“I am the Blood! I am God’s Right Hand, and you will NEVER dictate to me how I am to be a king!”

The quote by King John I, played by Paul Giamatti, is taken from the medieval movie Ironclad (2011). The film centers around The Siege of 1215. It was one of the bloodiest sieges in English history, when, following the signing of the Magna Carta, King John gathered an army to reclaim his power over England and exert bloody revenge against those who defied him.

The film portrays John as ​​a cold-blooded torturer. But it is a bit ironic considering he was the ruler who signed the Magna Carta, a historically important document that both limited the power of the King of England while also giving back independent powers to the barons around his country.

One of the major characters of the 2017 epic fantasy movie King Arthur: Legend of the Sword. King Vortigern (Jude Law) seeks the mighty sword known as Excalibur so that he can rule every country and enslave humanity. Vortigern is a master manipulator. He staged a coup and sacrificed his wife to become a powerful demon knight. In this form, he killed Arthur’s parents. Eventually, Arthur grows and he’ll be back to “strike down upon thee with great vengeance and furious anger vengeance upon him”.

King Aethelwulf (Moe Dunford) is such a great warrior-king, yet he was treated by everyone he cared for like trash. Abused by his father and abused by his wife, the two closest people in his life. Yet he withstood it calmly as a rock. Aethelwulf of Wessex is definitely one of the best warriors in the Vikings series. On the battlefield, he is the strongest Saxon. Aethelwulf’s army faced the ‘Great Heathen Army’ and this guy killed three Vikings with his bare hands!

Mehmet the Conqueror is not just any sultan, he is a combat genius. He tried hard to get the Byzantines to surrender diplomatically so as to avoid pillaging.

When Constantine rejected Mehmet’s offer to surrender, he pretty much sealed the fate of the city. The medieval Sultan allowed his army to pillage, kill and rape the population for two days immediately after the battle was over.

Philip has the gift to persuade people to do what he wants in a very quiet way. He had the ultimate power to do whatever he wants, he was completely above law and is ordained by god. In the Knightfall series, King Philip is a weak fool who demonstrated a penchant for extreme cruelty in the latest episode. But, looking at Philip IV with 21st-century morality does him injustice. Instead, we should be looking at things as medieval Christian.

When Phillip goes on to destroy the Templars, can you blame him? With the conquest of Acre by the Muslims in 1291, the Crusader kingdom fell, and the Templars withdrew to Europe. The kings of Europe were not happy to receive a large and skilled army of young and rich, strong and well-organized men, who were looking for a new goal. Most of all, royal families hated them because they were rich. The Templars controlled the global banking of their time, and many of the kings and princes of Europe owed them money.

In reality, Philip IV of France was one of the big architects of the late-medieval French state. He managed to win against the papacy on the question of supremacy, a thing neither the king of England nor the Emperors succeeded in. He fought successfully against English and Flemish alike, reformed the bureaucracy, and called in the first general estate.

Beowulf is the protagonist of the epic, he is is a Geatish hero who fights the monster Grendel. The power of his intellect does not fall from his physical abilities. He has two extraordinary qualities a. Power equal to the power of thirty men. Exceptional swimming talent and superhuman ability to dive to depths and indefinite time. He bought his fame in the most difficult way. He stood up for a face-to-face battle with Grendel without the use of weapons, in order for the battle to be fair.

Despite his advanced age, Beowulf managed to kill a nasty dragon that attacked his castle by ripping its heart out. In a battle of horrors the two struggle, and Beowulf overpowers his opponent and rips his arm. As a consequence, the king is declared a national hero.

Robert’s brother, claims to be the rightful king and is indeed the king according to the laws of inheritance of Westeros. Robert established an army, and a large navy with the aim of taking over Westeros and gaining the kingdom. He is assisted by Melisandra, the powerful sorcerer of the god of light, who believes Robert is “the chosen one.”

Stannis has a wife and several children, including the girl Sheerin who is hidden in the tower because her face was mutilated with gray scales. Along with Melisandra, he is also advised by Davos, a former naval smuggler who has corrected his ways and has good qualities.

Stannis is the greatest military commander in Westeros. He believes that he is the rightful heir to the Iron Throne. He is also stubborn and never gives up. Irrespective of the defeats faced he is always ready to fight for his rights and claims. He assassinates his opponents to the crown using blood and fire spells cast by Lysandra. These spells usually require a human sacrifice to the god of light.

He later helps his army to repel the savage attack on the wall. Stannis is an excellent leader who enjoys testing his opponents. He is an intelligent military commander in all of Westeros, even possibly an all-time contender.

It’s hard to find any Game of Thrones fans to testify that Stannis Baratheon is their favorite character, but if we disregard the fact that he’s a true bustard, he is a skilled underrated warrior king.

See relevant: Lord Of The Rings vs Game Of Thrones: Which is Better?

And so we have King Arthur as the most powerful warrior king. The legend of King Arthur and the Knights of the Round Table is one of the most told and talked about legends. The legend of the revered English king that grew up somewhere in the Middle Ages left a significant mark on the culture and history of the people.

According to some sources, the legend originates from a brave British governor with the same name as “Arthur” who operated in Britain after the Roman withdrawal from it, in the early 5th century AD.

King Arthur was known as a pursuer of justice and equality and the knights were Arthur’s chief aides in all matters of the army, and sometimes also in control of the kingdom and their status was very high. King Arthur, who advocated equality, wanted everyone to be equal to him, and so, in order not to be the “head of the table,” he seated all his knights around a round table, himself sitting at the table as one of the knights.

King Alfred vs Robert The Bruce

The victor in the battle between the Scots and the Saxons will be determined in a duel between these two warrior kings. Who wins for his people?

For this Faceoff, we are about to find out who deserves his throne! Which warrior-king character would win in a fight to the death?

For this faceoff, we have a competition of will between two mighty warrior-kings (okay one prince) – Who wins and who gets obliterated?

For this faceoff, we put two-sword fighting legends, medieval kings, on the same screen – who walks off victorious?

For this faceoff, two icon warrior-kings fight, and one ends in pieces – which character would it be?

For this faceoff, we have a royal battle for domination – who wins in the death battle?

They may not be the fastest warriors, but they make up for it with raw strength and loads of battle experience. Which one of these warrior kings wins in single combat?