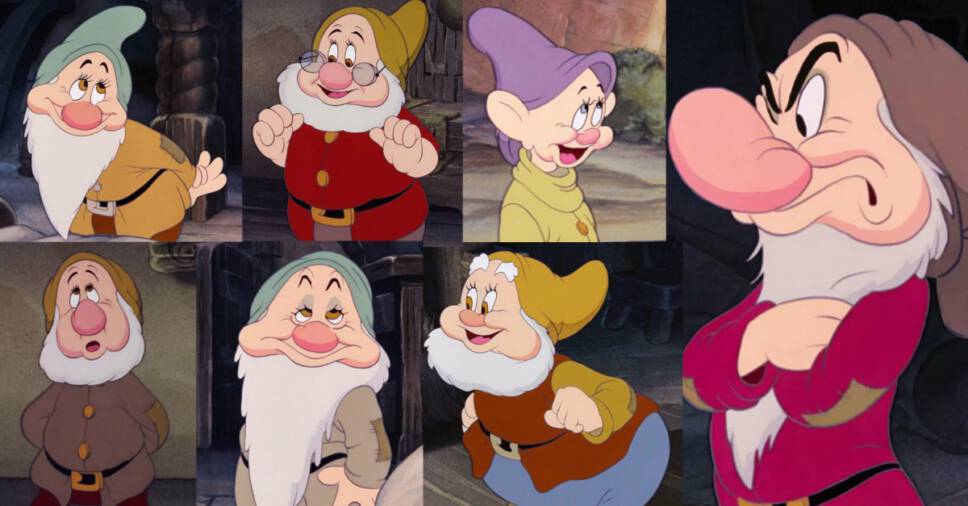 In the original 1812 tale, Snow White (titled Schneewittchen), written by the Brothers Grimm, the 7 dwarfs were not given names. It wasn’t until a Broadway play in 1912 that the 7 dwarfs were given individual names Blick, Flick, Glick, Snick, Plick, Whick, and Quee. The Disney film introduced very different names but also elaborated upon their individual characteristics.

The story of the creation of the animated film is an exciting Hollywood legend in itself. Snow White and the 7 Dwarfs was the first full-length animated film created by Disney Studios and screened in full color in December 1937. In fact, the cinematic adventure that Walt Disney embarked on was no less a grandiose ambitious, and technologically innovative project. The animated film paved the way for all fantasy films that followed.

Let’s face it, Disney’s characters are the best known now, so let’s take a closer look at the 7 dwarfs’ names.

What Are The 7 Dwarfs’ Names?

The self-proclaimed leader, and spokesman of the seven dwarfs. He is about ¼ head taller than the other dwarfs, and the only one whose name is not an adjective. When speaking, he keeps stuttering and mixes up his words. He is also the only one in the group who wears glasses. He has excellent cognitive abilities.

Doc always encourages rational thinking amongst the dwarfs and is particularly kind towards Snow White. According to this Disney website one of the earliest story documents, in mid-1934, had suggested a dwarf called Doc who actually was a doctor. This idea persisted for several months. Doc examined Snow White when she was poisoned by the Witch.

One of Walt Disney’s earliest handwritten notes in mid-1934 describes the angry dwarf as: “One skeptical & pessimistic dwarf always predicting trouble. Grumpy lives out his days with a sour deposition.” According to the Disney manuscript “The name Grumpy appeared by August 1934, and by October, various outlines were describing him as typical dyspeptic and grouch—pessimist, woman-hater—the last to make friends with Snow White“.

Arguably, Grumpy has the strongest character. He is perhaps the most capable and competent of the dwarfs. This can be seen when Grumpy leads the dwarfs on a heroic quest to rescue the princess from the Queen showing his affection for her after all.

The only dwarf who does not have a beard. It might be that he’s younger than the others, as he is the only one who wears an oversized tunic. However, there’s no way to determine the age of any of the dwarfs. He is clumsy, immature, and mute. Happy, states Dopey, is simply unaware if he can speak, he simply never tried. In spite of this, he can occasionally make various sounds such as hiccups.

Dopey is intellectually disabled to a higher extent while seeming almost as joyful as Happy. The other dwarfs love to joke at his goofy actions which often annoys the pompous Doc and the short-tempered Grumpy.

Dopey was so popular and received so much fan mail that there was some speculation that the Studio would make a Dopey spinoff series.

One of the most interesting characters in Snow White and the Seven Dwarfs. True to his name, he is extremely shy, especially in front of Snow White. But that’s because he has a true romantic spirit. Bashful has a crush on Snow White, and his bashfulness reflects his sensitive nature.

His shyness often makes him blush madly, covering his red face beneath his long beard in between giggles and shy chuckles. This can be seen when Snow White decides to share a story with the dwarfs, Bashful joyfully suggests a love story. Cute!

Another dwarf whose early conception was far from the character we know in the animated film. Sleepy is always tired and appears slow and heavy in most situations.

However, he is probably the cleverest character in the whole pack. He was the only dwarf to suspect that the Evil Queen may be attacking Snow White at the cottage.

Walt Disney animator Art Babbit suggested that “He drags along as though he had weights on his feet,” he will always prefer a good sleep.

Like all the 7 dwarfs, Happy is true to his name. He is a cheerful optimist, with an energetic personality. He is usually portrayed laughing. Like Grumpy, Happy was one of the first names suggested for the dwarf group.

Aside from his bubbly nature, Happy appears to be the most chubby of the dwarfs and shows a great love of food. He is the most friendly of the gang. He happily, and politely introduces himself to Snow White.

The last inclusion in the film was during the early story development stage in 1936. He replaced another dwarf whose name was Sneezy-Wheezy. His name symbolizes his extraordinarily powerful sneezes. He always sneezes, or, is about to sneeze.

Drawing on an American comedy tradition, the sneezing gags were a good way to shift the action. Sneezy is one of the friendlier dwarfs in the group of brave little people, despite his frustrating affliction. He seems to get the most laughs from Dopey. The reason might be that he knows how it feels to be embarrassed due to his violent sneezing.

What Do The 7 Dwarfs’ Names Symbolize?

Walt Disney’s team decided that the 7 dwarfs’ names would symbolize different common characteristics and be named accordingly.  The famous short characters‘ physical traits like facial hair, weight, height, and what they wore, were carefully considered.

Doc keeps us in touch with reality. Grumpy represents the middle-age depression mode some of us experience during the years, which makes us serious adults. Dopey, is quite the opposite, the name symbolizes that part of us that refuses to get old, and serious, and will always see the light. The aspect of humor or silliness is expressed fully in Sneezy. Bashful is connected to a humble characteristic and the need for privacy. Sleepy represents the mechanism within us u to take a break from the chaos.