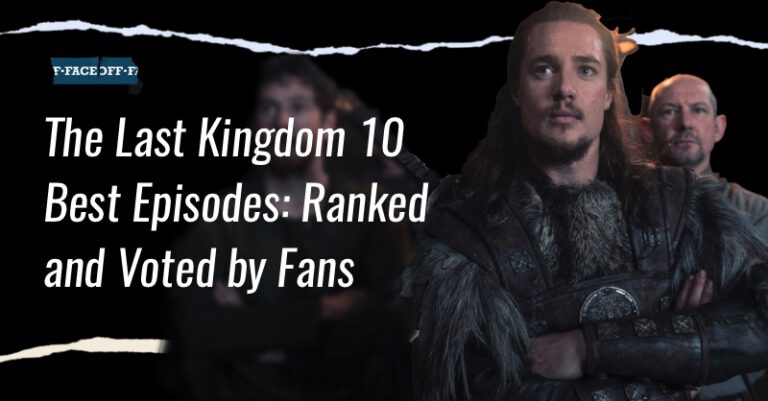 The Last Kingdom 10 Best Episodes: Ranked and Voted by Fans

The Last Kingdom season 5 is just around the corner and with the new TLK Netflix film in production, the end of an epic saga is upon us. It’s time to look back at The Last Kingdom’s 10 Best Episodes according to IMDb. For years The Last Kingdom has been in the shadow of Vikings. Both shows cover the same time periods, and the characters overlap. But TLK quickly became a masterpiece of storytelling, betrayals, political fights, love affairs, and epic battles.

Which Are The Best Seasons Of The Last Kingdom?

Uhtred bests Bloodhair, but Ragnar interrupts the fight, and Uhtred and Skade the fortune teller, leave Dunholm. At Wincelcumb, he meets Æthelflæd, while Alfred, having learned of the Great Danish Army through Haesten, sends word to Æthelred to ready his troops. Haesten goes to Wincelcumb to take revenge on Æthelflæd, who he suspects to be hiding there. When Haesten’s men try to take the nunnery, they are surprised by Uhtred and his men. Their numbers decimated, Haesten agrees to negotiate and Uhtred exchanges Æthelflæd for Skade, (Thea Sofie Loch Naess) whom he must now recover to prevent her curse from ruining his life.

At the Viking camp, Æthelwold proposes to Cnut to dispose of Ragnar, and Cnut agrees. Ragnar takes a woman to his tent to father a child because Brida appears infertile. In his sleep, he is stabbed by Æthelwold. Æthelwold prevents him from seizing his sword, and therefore from entering Valhalla. Finally, Æthelwold sets the scene to suggest that Ragnar’s woman attacked him and he killed her in self-defense.

Uhtred and Halig are thrown in chains on a ship by the Icelandic slaver Sverri. The lords of the north congregate in Eoferwic, where Ælfric abandons his alliance with Guthred due to him not being presented with Uhtred’s head. Erik and Sigefrid break their truce with Guthred as well, now that he has no backing. Uhtred and Halig are brought to the Norse colony at Húsavík as timber workers. After a failed escape attempt, Sverri has Halig bound to the prow of his ship, where he eventually dies. That spring, Uhtred is brought back to England to be sold to Sven. Young Ragnar arrives and rescues Uhtred, having been instructed by Alfred to bring his field commander back. Hild nurses Uhtred back to health. Eadred tries to force Gisela into marriage with Ælfric to rekindle the alliance, with a proxy standing in for the missing Ælfric. Uhtred and Ragnar interrupt the “marriage”, and Eadred is killed by Uhtred after taunting him numerous times. In Wessex, Alfred confronts Uhtred about the murder. As Ragnar held responsibility for Uhtred, Alfred blames him and blackmails Uhtred into swearing fealty once more to save Ragnar from retribution.

Aldhelm warns Æthelflæd (Millie Brady) of Æthelred’s plot and she escapes to Wincelcumb nunnery. At the court, Alfred tasks Beocca with finding a bride for Edward, but Ælswith asks Beocca to decide in favour of Æthelhelm, ealdorman of Wiltunscir. Bloodhair, Haesten, and Æthelwold arrive in Dunholm, while Alfred seizes Uhtred’s property in Coccham and orders for his children to be taken to Winchester. Æthelflæd’s maid Sable delivers two letters from Æthelflæd to Beocca, asking him to find Uhtred for help. Bloodhair wants to fight Uhtred for Skade, but Ragnar declines. Eventually, Ragnar, Bloodhair, Haesten, and Uhtred decide to join forces against Wessex, although unrest grows amongst Uhtred’s Saxon men. Beocca and Thyra follow Uhtred to Dunholm, where Beocca reminds him of his promise to come to Æthelflæd’s aid when needed. Uhtred deserts the Danes, at which point Ragnar gives in to Bloodhair’s request for a duel to the death.

Wulfhere and his men desert Alfred to join Guthrum. Alfred and his remaining force journey to Odda in the hope of gathering an army. Uhtred discovers his son has died, fulfilling Iseult’s prophecy. Iseult also reveals that Uhtred’s sister Thyra is still alive. Alfred sends messages for loyal troops to gather at Egbert’s Stone. Odda the Younger rejects Alfred’s request for troops. Odda the Elder kills his son for his treason, and his men join Alfred and meet up with the other troops. Alfred delivers a rousing battle speech and Uhtred leads the army in a shield wall. The Saxons push the Danes back but Leofric is mortally wounded. Skorpa leads his horsemen behind the Saxon army and slaughters all the camp followers, including Iseult. Skorpa taunts Uhtred with Iseult’s severed head and on seeing this Uhtred goes berserk, breaks rank, and charges over the Viking shield wall. His rage opens a gap that allows the Saxons to pour through the Danes’ defense and claim victory. Young Ragnar and Brida are taken as hostages to secure the new peace with the Danes, and Guthrum converts to Christianity having seen Alfred’s victory as proof that his ‘God is with him. Uhtred, Hild, and Halig ride north to Bebbanburg.

See also: Uhtred of Bebbanburg vs William Wallace: Styles Of Leadership And Inspiration

Married by Beocca to Gisela, Uhtred joins Ragnar and Alfred’s nephew, the reluctant Aethelwold, and others including Hild and Beocca to travel north and defeat Sigefrid and Erik – and ultimately Kjarten, meeting up with Brida on the way. An early victory sends the treacherous brothers into exile and later brings Uhtred’s party to visit a contrite Guthred, who now approves the storming of Durham, and the release of Ragnar’s sister, Thyra. The town is successfully captured and Ragnar faces Kjartan in single combat, a victory for justice, though Thyra does not react as hoped.

Father Pyrlig is sent by Aelswith to Wales to ask for help from King Hywel. Uhtred has joined Aethelflaed in Aylesbury. The fortress is attacked by Cnut’s men who want to capture Aethelflaed. Uhtred threatens to kill one of Cnut’s sons. Cnut’s man, Bjorgulf, calls his bluff. Uhtred throws them the decapitated body of a dead child and they retreat. Uhtred lets Cnut’s sons go. Eardwulf realizes he must tell Aethelred of the Viking invasion of Mercia. Eadith sleeps with Aethelred to soften his reaction when he hears the news. Aethelred blames Eardwulf and promises revenge. Aethelhelm tells Edward of Aelswith’s subterfuge in sending Pyrlig to Wales. He confronts her and she tells him that his men will revile him if he lets Aethelflaed die.

Bjorgulf, tells Cnut of his son’s death. Incensed, Cnut orders his men to march immediately to rescue his remaining son. The Mercian fyrds and the Welsh battle the Danes at Tettenhall. Aethelred’s army arrives to enter the fray. When all appears lost, Edward’s army determines the outcome. While the legendary sword fighter Uhtred fights Cnut, Brida hears of his betrayal of Ragnar. She kills him. The Welsh take Brida prisoner. She asks Uhtred to kill her, but he refuses.

After thirty days of siege, Edward has still failed in his attempt to enter Winchester. Edward is beside himself. Uhtred believes Sigtryggr will negotiate. Sigtryggr shows Edward his sons and offers him one of them if he retreats. Edward sinks into despair, incapable of making a choice. Uhtred offers himself in exchange for both children. Sigtryggr agrees. Brida wants to torture Uhtred but Sigtryggr prevents it. Uhtred and Sigtryggr discuss a strategy to build a truce. Aethelflaed has claimed Eoferwic and arrives at Winchester with her army. Edward decides to use smoke to conceal an attack on Winchester. His army breaches the door to the fortress. Uhtred stops the battle.

Edward and Aethelflaed agree to give Sigtryggr Eoferwic. He asks for a captive to guarantee the truce and chooses Stiorra. She convinces Uhtred to let her go: she wants to be Sigtryggr’s companion. Brida attacks Uhtred and tries to kill him. She fails but vows to be his undoing. Aelswith unwittingly seals her own fate when she tells Aethelhelm that there is a plant in the courtyard, the flowers of which when dissolved in water are tasteless and poisonous. Edward assigns Aethelstan into Uhtred’s care.

When King Alfred is told the great sum of Æthelflæd’s ransom – and the horror that will likely befall his daughter if Wessex does not pay – he feels there can be only one way forward, despite this jeopardizing the kingdom. Suspicions at Beamfleot threaten to unravel the lovers’ escape plan, and Uhtred must think on his feet if he is to secure Æthelflæd’s freedom and save Wessex. Odda risks everything for the kingdom and makes an unlikely ally, while Gisela and Uhtred contemplate a future as enemies of Alfred. In a devastating showdown at Beamfleot, there is passion, heartbreak, and treachery.

Alfred tells Uhtred about the chronicle and discusses Edward, religion, and Christianity. Alfred admits he wanted to inflict pain on him but confesses that the decision was selfish and irrational, then admits he was wrong and did not give Uhtred the respect he deserved. In the meantime, Ælswith overhears them talking, enters the room, and tells Alfred she does not want Uhtred by Edward’s side. Alfred wonders what will come in the future instead. Æthelwold and Sigebriht continue their scheme and start a rumor that Uhtred is nearby waiting to get revenge. Alfred pardons Uhtred. Cnut embraces Brida, but he lies to her about the death of Ragnar. Back in Winchester, Tidman is confronted for harassing Thyra, where Beocca ends up headbutting him.

Alfred passes away after Uhtred confirms he will stay to ensure Edward is named king. Ælswith rescinds the royal pardon and Uhtred is locked in a cell. Tidman continues harassing Thyra and she flees from him, hiding in her home. Tidman finds her and sets fire to the house. Thyra manages to kill him with a knife but remains trapped under the floorboards while the blaze continues.

Finan and Sihtric rush to put out the fire but realize that Thyra could still be inside, the fire gets far worse and Thyra takes the knife and kills herself. After that, Beocca rushes to the scene and cries for her. Æthelwold discusses with Æthelred to negotiate with the Danes and let them slaughter Edward and his allies. At the jail, Æthelflæd pleas with Uhtred to leave Wessex, as Ælswith has banished him. Beocca interrupts and gives Uhtred the news of Thyra. At the camp, Haesten fires up the Danes army by telling them that Alfred is dead. Uhtred’s pardon is upheld by Edward, after which Uhtred sides with Edward as a free man and prepares for the battle.

Uhtred confronts Sigebriht before traveling to Bedanford with the Wessex army. Uhtred intends to kill the man who killed Ragnar using a blade marked with Thyra’s blood. On the other side, Brida discovers the name of her brother’s killer and sends Jackdaw to deliver a message to Uhtred. The battle of the two armies begins after the Mercians of Æthelred arrived. Sigebriht reaches the battle late as planned and decided to fight for Saxon. At this point, Haesten sees Sigebriht with Wessex and says that they have been betrayed. A battle ensues and Cnut manages to kill Sigebriht. Uhtred and Brida stare down Æthelwold. He makes a run but is cornered and killed by Uhtred. Edward wins his first battle as the chronicles mentioned and Ragnar finally crosses into Valhalla.

The Last Kingdom’s best episode of all time is:

Armies converge in an epic, final showdown that determines the fate of a king’s dream for England – and Uhtred’s hope for securing his family’s future.

Which is the best TLK episode in your opinion? Vote Below

I look forward to a score-breaking season 5! Come Netflix, destiny is all!

A musician and film buff. I'm a Film graduate of The Sam Spiegel Film and T.V. School program. Creative writing by nature, a very curious girl, exploring all geek fandom.
All Posts