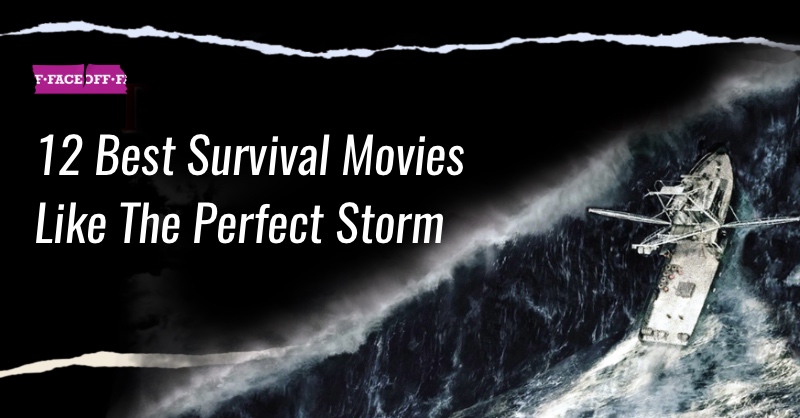 If you are looking for suggestions for the best movies like The Perfect Storm, we got you covered. The film, starring George Clooney, accounts for the terrible storm that took place in the USA in 1991. In a certain area of ​​the ocean, 3 hurricanes merged into one huge, terrible, and raging hurricane that sowed terrible destruction and devastation.

We follow the story of a number of sailors who go fishing there with the hopes of earning a bigger salary by catching bigger fish. Fate catches up, and a terrible storm forms.

Here are 12 movies like The Perfect Storm with similar elements, mainly where the storm is not the main plot.

In 1989 a yacht with four crew members on board was set to sail from New Zealand to Tonga. After a huge wave capsized the Yacht, the sailors drifted on sea for 119 days trying to survive and ended up on the Great Barrier Island.

Based on a true story, this movie is so realistic it is taking you to days on the sea and the survival mode of being in solitude in such a situation. It has amazing visual effects and a great cast like The Perfect Storm.

Based on a true story, in 1952, ​​a rescue operation took place on the coast of Massachusetts. It is considered one of the most heroic in the history of the U.S. Coast Guard. When a severe storm hit the east coast of New England in 1952, it hit two oil tankers with crews trapped inside. The senior officer on board (Chris Pine), soon realizes that he must take responsibility for the frightened crew, and encourage them to work together to keep the ship afloat for as long as possible, at the same time, the coast guard is launching the most dangerous rescue operation.

This movie is so inspiring – it is full of action and drama – one of the best in this sea rescue Genre.

In the midst of a voyage in the Indian Ocean, when he is completely alone, a veteran mariner (Robert Redford), wakes up to discover that his yacht is inundated after a collision with a foreign object floating on the waters of the Ocean. With paralyzed navigation and communication systems, he sails on an unfamiliar path, in the direction of a violent storm of winds.

With nothing but resourcefulness and courage – everything seems lost. Robert Redford in a once in a lifetime performance, in this movie you are taken straight to the ocean, to this dangerous situation, and you are drawn into it.

When a massive hurricane hits Haley’s (Kaya Scodelario), hometown in Florida. She ignores the area’s evacuation warnings, in order to search for her lost father. Haley finds her father in the basement of the house, mortally wounded. The two soon find themselves trapped in the basement, while the flood outside begins to drift inside. As their window of time to escape the storm closes on them, Hailey and her father discover that the water that quickly fluids their home is their least problem when they are attacked by giant alligators.

Wait for a lot of suspense if you watch this movie: Hurricane, on one hand, alligators on the other, and you’ve got one hell of a thriller.

The director of an orphanage (JImmy Gonzales), and the children under his supervision, decide to cooperate with a worn and irritated captain (Dennis Quaid), in the hope of winning a prestigious fishing competition and preventing the place from closing.

Based on a true story, this movie teaches you a life lesson – never give up, Even if things seem hopeless. Dennis Quaid is in such a great role.

A luxury ship called the Poseidon sailed on its last voyage from New York to Athens, where it would be dismantled. The ship’s captain worries about its poor mechanical condition, but the ship’s owner decides to continue the journey. During the voyage, the ship is caught in a storm, caused by an underwater earthquake, and a tsunami wave turns the boat over and traps the crew and passengers in it.

Based on a novel of the same name by Paul Gallico, IT was one of the first disaster movies ever filmed. It is thrilling and scary, and the visual effects for that time are really convincing.

TV forecaster Bill Harding (Bill Paxton), is trying to get his wife (Helen Hunt) to sign a divorce agreement so he can marry his new girlfriend (Jamy Gertz). But since his wife is a tornado enthusiast, who chases the eye of the storm when a Tornado storm gradually develops in Oklahoma, the three will soon join a dangerous chase after the storm.

Twister was a nominee for visual effects – and indeed visual effects are amazing! An interesting storyline and a lot of action and romantic layers. All combined with the thrilling fact that there is a Tornado going on in the background.

In 1996, Eight mountain climbers encounter a fatal blizzard during an attempt to climb to the top of Mount Everest. The climbers’ rescue attempts failed and they were left alone on the top of the mountain, struggling to stay alive.

Based on a true story, this event became the largest and most deadly disaster on Mount Everest until that year. With an amazing cast including Jack Gyllenhaal and Keira Knightley, this movie will take you to survival mode on mount Everest.

When an oil platform is blown up on the Norwegian shore, researchers arrive at the scene and try to find what happened, during their investigation, they realize that the blow-up was a sign for more dramatic events to come up.

The North Sea is so relevant for today’s climate change discussions, it deals directly with this crucial issue. With great visual effects, this film will fascinate you.

Ana (Grace Van Patten), is transported to a dreamy and dangerous shoreland, where she joins an army of girls engaged in a war that never ends. Although she finds strength in this exciting world, she realizes that she is not the killer they want her to be and she is forced to go out against her girlfriend Beautiful photography and a unique plot make this movie a real worth-watching art piece for this year.

During one day, the town of Silverton US is attacked by a series of unprecedented tornadoes. The whole town is at the mercy of the formidable cyclones, and storm hunters predict that the worst is yet to come. Most people seek refuge while others gallop towards the whirlpool and try to catch a once-in-a-lifetime photo.

The film looks very authentic since it is told through the eyes of professional stormtroopers, amateurs, adventurers, and simple people from the town and throws viewers directly into the eye of the storm, to a place where they experience the forces of nature in the most extreme way possible – the visual effects are amazing if you like to try what storm feels like this is the movie for you.

Based on the true story of the Gulf of Mexico oil spill. Considered the greatest environmental disaster in history – the film tells the story of 126 crew members who stayed on the Deepwater Horizon oil rig, which drilled deep into the sea. In April 2010, the oil spill caused a fatal explosion, killing 11 people and trapping the rest of the crew. The deputy foreman (Mark Wahlberg), becomes the leader of the workers in their attempts to escape from the burning rig when the rescue forces are unable to approach the scene and assist.

This is a true masterpiece, the film had an Oscar nomination for visual effects, which are indeed amazing, and Mark Whalberg is doing such an emotionally complicated role with great success.