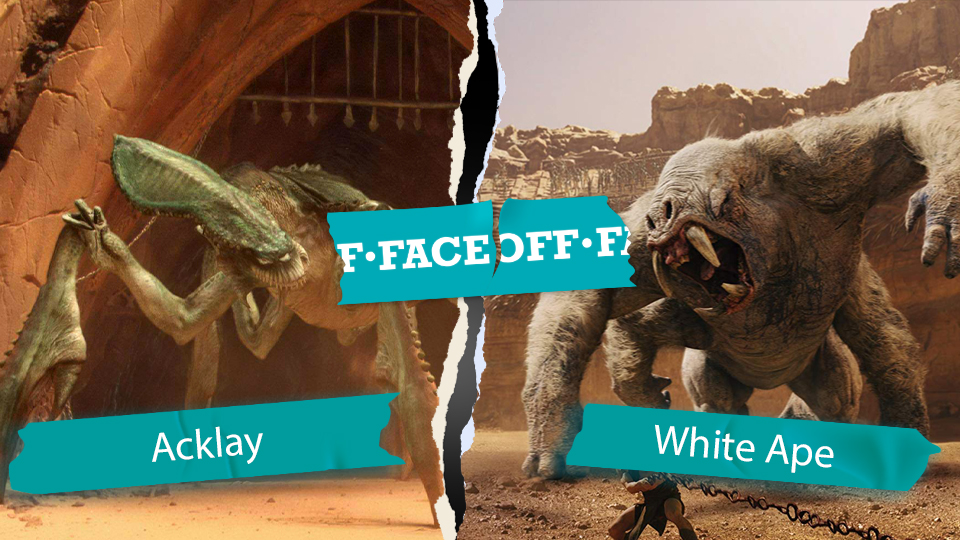 These huge, monstrous creatures are quick to attack any human who dares to come near them. If you see one of them, we recommend running as fast as you can in the other direction, but if they’re hungry you will most likely become trail-mix. In this battle scenario, we face off those big scary lurking along the path, both alien and Earthborn.

Your punishment for shoplifting is to be put in a maze with one of these creatures (overkill right?). Which creature do you think you are more likely to outsmart? Rancor (Star Wars: Return of the Jedi) or Eborsisk (Willow Movie)?

You’ve finally found where your arch-nemesis is hiding out and it’s time for him to go! Which creature would you send after him? Shelob (The Lord of the Rings movies) or Ursa (After Earth)

If you want to win over the heart of that girl you’re in love with, you have to show her you’re tough! Which creature would you set out to slay to prove your point? Kikimore (The Witcher, TV series) or Basilisk (Harry Potter)?

You’re in a colosseum about to face an onslaught of deadly creatures. Which of the below would you choose to aid you against them? Acklay (Star Wars: Attack of the Clones) or White Ape (John Carter, movie)?

You’re being sent on a dangerous mission deep in enemy territory, but you won’t be alone. Which would you choose to tame and take with you? Moorwen (Outlander movie) or Frost Beast (Thor)?