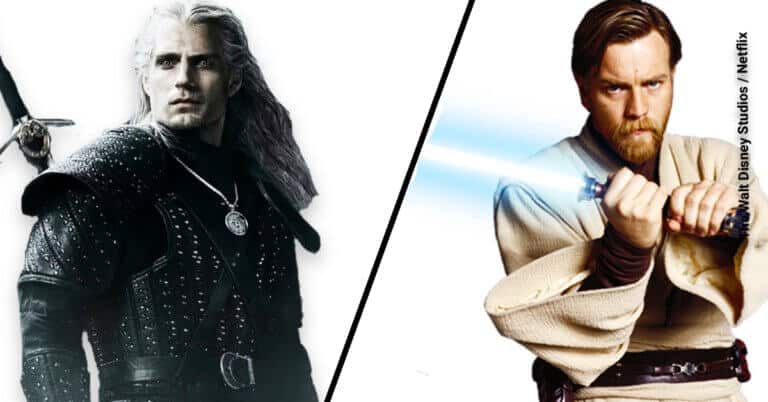 Faceoff » Battle Report » Obi-Wan Kenobi vs Geralt Of Rivia: Who Would Win?

Obi-Wan Kenobi vs Geralt Of Rivia: Who Would Win?

On one corner, wearing the traditional brown Jedi apparel and holding a blue blade Lightsaber, we got Master Jedi Obi-Wan Kenobi.

On the other corner with milk-white hair is the Witcher, Geralt of Rivia, wielding two swords – one with a silver blade for monsters and one from steel for humans. It’s The Epic Battles League, first-round battle: Obi-Wan Kenobi vs Geralt Of Rivia!

For details on how these prospects were selected and seeded, see the master Epic Battles League Tournament. post.

We present scouting reports, and you can vote on the poll below, or on Instagram. Please post a comment clearly supporting one or the other. Comment votes count ten times more than poll votes.

This is truly a battle for the ages between THE FORCE and magical forces, as Geralt is a magically-enhanced mutant who has a range of effective spells and signs he can use to subdue enemies.

Obi-Wan is one of the strongest Jedi and powerful users of The Force. He is capable of using telekinesis to push or levitate objects or to crush them.

Watch the video Obi-Wan Kenobi vs Geralt of Rivia

That’s it, the combatants are set. Disagree? Want to share your rage? Now it’s up to you – We can’t wait to see your vote! Feel free to also comment about each match-up and share your thoughts with us.

Qui-Gon and Geralt both metaphysically channeling a few baddies away in their first on-screen mob fights makes me want to do crossover memes now. As to Geralt v Obi-Wan, one should consider that not only is Geralt resistant to magic, the original premise of Eps VII-IX was that the galaxy is invaded and creatures from other galaxies are force-immune; this also means the Force isn’t present on The Continent. I don’t think Obi-Wan can beat The Witcher one-on-one. Obi-Wan’s best strength, though, is that he always seems to gain the affinity of indigenous creatures. Geralt has the benefit of extensive lore to help him in his world. So the only way this is a fair fight is in the Star Wars galaxy.

Everyone saying lightsaber would cut through Geralt’s sword allow me to interject. Geralt of Rivia, Starkiller, Yoda, and Vader have all been canon in Soul Calibur lore where it was covered that the magic of the swords could indeed deflect or block a lightsaber attack. That said I still give it to Obi-Wan, the force gives him far superior agility and the power to perceive incoming attacks. He knows what Geralt will do before he does it by the ripples in the force. Also Obi-Wan is the best duelist among mainstream Jedi.

So I think they are an even match. Pretty much any advantage the force gives obi-wan Geralt has a sign or potion that can do similar things. Force pull? sign for that. Mind control? Sign for that. Danger warning? Medallion got that covered. Enhanced reflexes?? Potion.Now about the lightsabers. There are actually a few materials that can block lightsabers. Geralt known to prepare for each upcoming battle could easily make sure he had a sword made from those materials beforehand. It would be a fight of the ages.

let’s say a lightsabre doesn’t make sense, end of the story and btw all Jedi are fighting with the wrong technic, they swing around with the sword like it is a longsword of 2 kg which is not since light doesn’t have weight and the blade is all danger, just touching the opponent kill it or make serious damage, fencing techniques would be better and hilarious to watch in a movie fight.

Well, depends on what abilities Geralt has, if you get from games, then Geralt without any problem. He can throw fireballs, slow time, make autoturret and much more.

Having studied scriptwriting in London, I subsequently worked on a number of film sets. I write about pop culture trends, films, and tv series on Netflix, Amazon Prime, Disney+, and Hulu.
All Posts