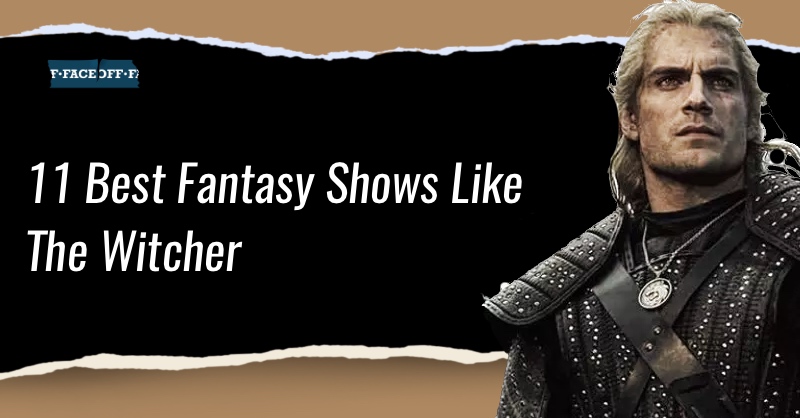 If you can’t wait to see Geralt’s new adventures in season three, we prepared a list of the ten best tv shows like The Witcher.

The Witcher follows the story of Geralt of Rivia, a solitary monster hunter, a sword-fighting legend, and a powerful wizard who struggles to find his place in a cruel world. The Netflix show is a total blast for fantasy, action, drama, and comedy lovers. Henry Cavill in a lifetime performance. This series is here to become classic.

The show is described as “a re-imagining of the Arthurian legend, told through the eyes of Nimue, Nimue (Kathrine Langford), is a young woman who is banned by her village, as they believe she is cursed. Her village is soon slaughtered by a religious tribe, but Nimue manages to escape and is entrusted with her legendary Sword.

Setting out on a journey to save her people from a holy war of extinction, Nimue struggles with the corrupting power of the Sword, while coming to grips with her secret history.

With a charismatic appearance by Kathrine Langford, this series is well crafted, with great visual effects, a smart plot, and a lot of action.

​​Merlin is a simple servant to young Prince Arthur of Camelot. They soon became best friends, but Merlin has a secret: he hides his magical powers in order to stay alive.

Merlin is the ultimate binge-watching series. It is thrilling and smart and it will make you think long after you will finish watching it.

Set many years after the destruction of civilization. Earth is now inhabited by the survivors of mankind as well as medical creatures.

The Shannara Chronicles covers the adventurous journey of three teenagers trying to protect and release all the banished demons. Based on a series of books by Terry Brooks, this fantasy series is not appreciated enough – from its great visuals and after effects, smart dialogues to amazing action scenes. Watch now: Netflix

See relevant: 12 Best Fantasy Movies Like Lord of the Rings

Taking place in an ancient feudal society, controlled by ruthless power-hungry barons – Badlands tells the story of a great warrior and a young boy who embark on a journey across a dangerous land to find enlightenment. With emotional intensity, great action, amazing martial art scenes, and awesome visual effects – this series will sweep off the feet of all these genre fans.

Lyra is a brave woman, that was destined since birth to take a dangerous journey to the cold north in search of her kidnapped friend. Her adventurous journey leads her to a series of epic scenarios and ultimately to other worlds.

Based on the trilogy by author Philip Pullman, this series is fantasy at its best, it hypnotizes you and takes you to a different zone with beautiful landscaped and brand new refreshing ideas – the ultimate 60 minutes of escapism.

In a fantasy world filled with monsters and demons, Alina is an orphan that discovers a superpower that thrusts her into the lavish world of the kingdom’s magical elite.

Based on the books by Leigh Bardugo – this series is melodramatic and full of action at the same time, it keeps you alarmed from the first time you watch it all the way to a re-run.

The Last Kingdom is based on Bernard Cornwell’s book series The Saxon Stories. It takes us to a period of time when Britain was divided into countless small kingdoms. The story follows the young Uhtred who was supposed to reign over his ancestral homeland.

The Last Kingdom is like Vikings, it is an excellent show like The Witcher. You will find a lot of similar things here.

Summarizing the plot of a series that ran for eight years and had 73 episodes of between 50 and 80 minutes each, is quite unnecessary. In case you lived outside planet Earth, you have probably seen Game Of Thrones.

Although The Witcher spells we’re not Game Of Thrones, still both shows share similar elements. The Netflix show is supposed to be the next Game of Thrones. Both are dark fantasy stories with magical warriors, kings, witches, dragons, and traveling companions. But both are telling very different stories in very different worlds.

Vikings series is based on historical figures. The show is similar to The Witcher when it comes to fantasy elements. It has some magical figures like the fortune teller and The seer.

Watching The Witcher mostly evokes nostalgia for Vikings. Fans of the genre can still take comfort in it until season two.

Netflix’s Norwegian series follows the story of Magne (David Saxton), a grown boy who moves to the small town of Edda in beautiful Norway. A poor and strange place in a small valley between huge mountains and impressive nature. This is where the final battle, Ragnarok, ostensibly took place, which led to the destruction of the world according to Norse mythology.

As Magne tries to fit into a new school, his life changes. He discovers he has strange abilities and slowly becomes a contemporary incarnation of Thor, the god of thunder.

When Netflix gives its creators budgets and conceptual freedom, series like Ragnarok are created. The story may be ancient but it never ceases to be original. And maybe along the way, you will learn a few words in Norwegian.

Xena is a warrior-princess with a mysteriously dark past, striving to redeem herself from her sins, by defending and saving the innocents.

This Emmy award-winning series (for dramatic underscore) is one of a kind – it was a 90’s bliss, it has such awesome action scenes, with a phenomenal female superhero character, played by the wonderful Lucy Lawless.

The fantasy book series “The Wheel of Time” received a TV adaptation by Amazon Prime Video.

The series takes place in a world where magic exists, but only selected women are able to use it. The story follows Morain, one of the members of powerful and feminine sorcery called “As Sadai”, who arrives in a small village called “The Two Rivers”. In the village, she embarks on a fantastic journey across worlds with five men and women, one of whom will become the new incarnation of the “dragon” – the commander of the forces of light. According to prophecy, the new dragon carries unlimited power that will save humanity or destroy it forever.

13. The Witcher: Nightmare of the Wolf

The Wonderful World of The Witcher has provided us with all sorts of adventures in the universe built by Andrzej Spekowski. Whether it’s two RPGs or a Netflix series, it was only a matter of time before someone would say, “You know what we need? An anime movie.”

The anime tells the story of Vesemir a sorcerer who escapes a life of poverty by becoming a powerful mutant. We are introduced to one of his missions the complex childhood he went through, and what he had to go through to become powerful.

Here we find the roots of the wizard’s world, the construction of the roots of Garrett’s mentor, the main character in movies and series, and the video games. Vesemir is a powerful figure, built by complex life circumstances. He also has a softness and even an emerging romance that will change his life.

This is a starting point for those who are unfamiliar with The Witcher saga. There is an acquaintance here with the world. The characters and the graphic violence that characterize it. And Nightingale will be a major character next season, so getting to know her can help to understand.

The fantasy show which began in 2005 as nothing more than an ordinary supernatural mystery series, has turned from its second season into a truly excellent series. Supernatural recounts the experiences of brothers Dean and Sam Winchester, who lost their mother to the yellow-eyed demon who killed her when they were children. The murder instilled revenge in every nook and cranny of their father’s body, turning him into a hunter whose job in life is to chase down ghosts, demons of various kinds, vampires, and other supernaturals in an attempt to capture the same yellow-eyed.

When the father disappears at the beginning of the series, the two brothers go out to look for him by locating fresh supernatural cases. In time they discover that the same demon who murdered their mother also did much more than that and that they both have major roles in fateful events, ones that are much larger than the screw they constitute in the system.

At first glance, this animated series looks like a full-fledged Japanese anime series. And not surprisingly, Castlevania is based on a beloved video game series from the Japanese company Konami, and its creators demonstratively designed it according to the aesthetics of the anime. But what makes the series a mast for the Witcher fans, and not just them is the excellent story and memorable characters.

First and foremost to these characters is Dracula, who loses his sanity after the death of his human wife and decides to destroy humanity through an army of terrifying monsters. Against him stands Trevor Belmont, a fierce warrior with dry humor, a member of an ancient family of warriors of evil, and with him a witch full of attitude named Saifa. And there is also one, Alucard, the son of Dracula and a mighty warrior in his own right, who connects with them.

Three witches Riley, Abigail, and Tally enlist in the United States Army. They practice magic and use their vocal cords to cast powerful spells.

Motherland: Fort Salem takes place in a world dominated by women which ended in a witch trial 300 years ago during Salem’s witch trials which ends in the Salem Agreement. The world finds itself confronted by a terrorist organization called the Spray, a group that opposes the recruitment of witches to the military.

A fantasy epic that takes place in tens of thousands of years and spans a thousand years. The series tells the story of Hari Seldon, a brilliant scientist living in a futuristic galactic empire who, with the help of the innovative method he developed, psychohistory, is able to predict the next few centuries in a big way – and the fact that the galaxy is doomed. Hari proposes to establish a foundation: a collection of scientists who will at least try to save the galaxy from the catastrophe it faces.

The emperor does not like the idea and offers to hang Haru in the town square instead. The two compromise on exile at the edge of the galaxy. Will humanity be saved? Will anyone listen to the scientists? And the really big question – does anyone care?

To sum up the plot in one paragraph is a difficult task. In part, because it’s a bit difficult to keep track of everything that’s happening in Foundation, and very quickly the feeling arises that we are not missing out on anything exciting.