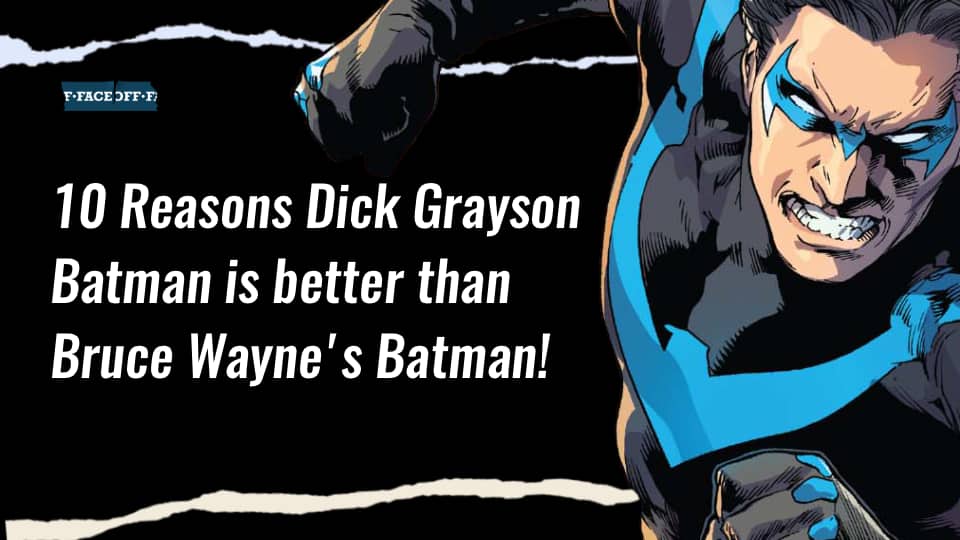 After Bruce Wayne’s apparent death during the Final Crisis, Gotham soon descended into chaos. A new Black Mask started dominating the city. He burned down Arkham Asylum, and the Bat-Signal was modified to say R.I.P. With the city in complete anarchy, Dick Grayson decided to take on the mantle of his mentor, Batman. With Damian Wayne as Robin at his side, he launched a new era for the Bat line.

Many people wished to replace Bruce with Batman, but Dick was the one who earned it. And he didn’t do it out of greed or a thirst for power – he did it out of necessity. During his run as the Dark Knight, Dick was his own Batman. He had his own methods and he did things his way.

Some say that Dick, not Bruce, is the Bat Gotham City deserves, and today we face off Dick Grayson vs Batman, counting 10 reasons why Dick Grayson as Batman is better than Batman, so let the trial begin!

1. Dick Grayson’s Batman is better than Bruce Wayne’s because everyone thinks Dick Grayson deserves to be trusted

Let’s face it, Bruce Wayne has toxic behavior and a lone-wolf attitude that forces the other heroes to keep him at an arm’s length. Dick Grayson, on the other hand, is generous, empathetic, and pleasant to be around. Where Bruce Wayne is reserved, pessimistic, and often downright unpleasant to deal with, Nightwing is charismatic, fairly polite, and cheerful in his dealings with others.

Dick actually has managed to build up quite the list of allies including more than a few villains who’ll help him simply out of genuine like of him as a person.

Bruce Wayne got serious trust issues. Meanwhile, everybody in the DC superhero community is friends with Dick Grayson. Dick is just more loved and more trusted than Bruce Wayne and this allows him to achieve better results.

2. Dick Grayson’s Batman is better than Bruce Wayne’s because He works better with Damian Wayne

It is no secret that Bruce Wayne and Damian did not mesh well with Batman and Robin. It might be due to Damian’s rebellious nature, or the fact that Bruce shares a similar personality type to the intense, and vengeful Damian.

Not surprisingly, Dick Grayson, who is light-hearted and forgiving, developed a better connection with Damian during his time as Batman.

He became the mentor young Damian could never seem to find in his father. For the first time in his life, Damian had a role model that isn’t harsh like Bruce Wayne or Ra’s al Ghul. Dick Grayson as Batman served as a good influence for Damian, acting as a nice counterbalance to the years of deadly training and repeatedly butting heads with Bruce.

At the end of the day, Dick and Damian made a much better Dynamic Duo than Bruce Wayne and his son, with Dick having someone to push him forward when he was going easy on the criminals of Gotham, and Damian having a more easygoing and spontaneous hero to look up to. Needless to say, the fact Dick Grayson knows what it means to be Robin played a part in helping reach Damian.

3. Dick Grayson’s Batman is better than Bruce Wayne’s because He is a world-class acrobat!

Dick Grayson is the only person in the world capable of the quadruple somersault maneuver. Although well-trained and surprisingly nimble, Bruce Wayne has never had the athleticism to pull off something like this outrageously difficult move. Dick is more athletic than Bruce Wayne in several ways.

If they were to compete, Dick would probably have him beat for the sprint, the long jump, and any gymnastics routine. These matter in the field, and it’s easy to imagine emergencies that Dick has the best odds of handling. Dick was trained by the best acrobats on Earth practically from birth, and the Court of Owls unknowingly taught him to be a great warrior.

He combined the Court of Owls’ teachings with his parents’ to create his unique fighting style. He is harder to hit than Bruce and harder to shoot, always moving and often at random. There’s no way Dick’s agility and speed don’t give him an edge on Bruce.

4. Dick Grayson’s Batman is better than Bruce Wayne’s because Dick has a better relationship with the GCPD

Maybe because of his more restrained nature, Dick, unlike Bruce, avoided invading active crime scenes. It allowed all involved policemen, detectives, and CSIs to completely finish with the scene and make sure they collected all evidence and records that would help later in the case.

That way, they could close these cases and ensure convictions. This behavior of Dick Grayson as Batman certainly improved the GCPD’s opinion of Batman. As Commissioner Jim Gordon explicitly told Dick: “…Most of my cops prefer you to him“.

During the Forever Evil arc, Dick Grayson’s secret identity was revealed, and he was seen to have died on worldwide television. Of course, he did not really die. In actuality, Batman and he had a talk about his future and Dick agreed to join a spy bureau named Spyral that Bruce was suspicious about its real intentions.

Dick went undercover and infiltrated the organization, becoming Dick Grayson, Agent of Spyral. During his time there, he proved he could use analytical and deductive skills to become an incredible spy and perform acts of espionage and spying.

Dick is the leader and the founder of Teen Titans, one of the most popular superhero clans! Bruce never founded a superhero team.

Except for the one time he did! When the Justice League disappeared, an emergency protocol that Bruce left behind, reestablished a replacement JLA that would substitute it until the primary team returned.

He appointed Grayson as a leader of this secondary Justice League, showing belief that Dick was a worthy leader, able to fill a role he himself could never. It is obvious that Dick leads teams and maintains partnerships with less drama than Bruce.

He is also capable of better decision-making and has natural charisma, which are major advantages he holds over his mentor.

Just like everything else in his life, Bruce Wayne’s love life is extremely complicated. Suffice it to say that his two permanent fixtures are women like Talia Al-Ghul and Catwoman! Yes, Batman has an unrestrained love life with his greatest opponents and enemies.

Dick Grayson, on the other hand, has much healthier relationships than Wayne because he is more emotionally available. Over the years, he had numerous serious relationships, but his two distinctive love interests were Barbara Gordon and Starfire.

With both women, Dick has a fairly healthy relationship, in which they respected one other, placed trust in each other, and had good communication.

Can you even imagine Bruce having that with Talia, who practically cheated her way into the position by becoming tube-baby-Damian’s mother and delivering the said baby to Bruce’s doorstep? Yep, we thought so!

Bruce isn’t famous for being funny. In fact, when he finally says anything even remotely funny people take note of that. He is basically written to be an earnest character who takes his mission as Batman very seriously. It’s almost like the writers think fans like their Batman humor-less. While Dick Grayson like Batman wasn’t exactly Jerry Seinfeld, he did bring humor to the cowl and wasn’t afraid to crack a joke once in a while.

For example, when a Tyger was being attacked by monkey bat things, hearing this through the radio, Grayson’s response was, “Please tell me that’s just the sound of you watching an Alvin and the Chipmunks movie. Again.” He even makes sarcastic remarks to bad guys while he fights them.

9. Dick Grayson’s Batman is better than Bruce Wayne’s because Dick is reluctant to hurt his companions

There have been many instances when the members of the Teen Titans have turned evil or were involved in wrongful things. For example, Raven was often being mind-controlled by her demon father Trigon. In these cases, Dick Grayson always refused to hurt his teammates and friends if there was even the smallest chance of bringing them back.

In contrast, Bruce is so suspicious he devises contingency plans to defeat his closest allies should they turn against the team. Always being prepared is great, but this is taking it to a whole other level. How would you feel if you found out a member of your team was planning to incapacitate you whenever he deems it necessary?

10. Dick Grayson’s Batman is better than Bruce Wayne’s because, despite all the trauma he suffered, Dick Grayson didn’t give in to the darkness like Bruce Wayne

Watching his parents gunned down was a central factor in Bruce Wayne becoming the Dark Knight. His inability to cope with loss and overcome adversity has made him incapable to show emotions, too suspicious of others, and stubborn as hell. He actually let himself be consumed by the darkness, which means he could only see the evil within others.

However, Dick Grayson has to suffer the loss of his family at the hands of villains. He could have easily gone the same path as his mentor. But he chose not to! He chose to open up to others – to his new family and friends. He turned to the light whereas Bruce embraced the darkness. That is what makes Dick a better hero.

Dick Grayson, first appeared in Detective Comics # 38 somewhere in 1940. He became Bruce Wayne’s Robin, Batman’s sidekick. He later went on an independent way and adopted the name Nightwing. Nightwing is a less depressed and more fun version of Bruce Wayne. He was in every possible role in the superhero community, from sidekick to independent hero to a super spy and the leader (for a short time) of the Justice League.

Talk about getting better as you go along! Nightwing proved that he is the better Batman than Bruce Wayne ever was. And with this optimistic thought and with Dicky boy’s smile, we conclude this list of 10 reasons why Dick Grayson Batman is better than Bruce Wayne’s Batman.

Dick Grayson vs Bruce Wayne: Who is the better Batman? Vote Below

1 thought on “Why Dick Grayson Batman Is Better Than Bruce Wayne?”