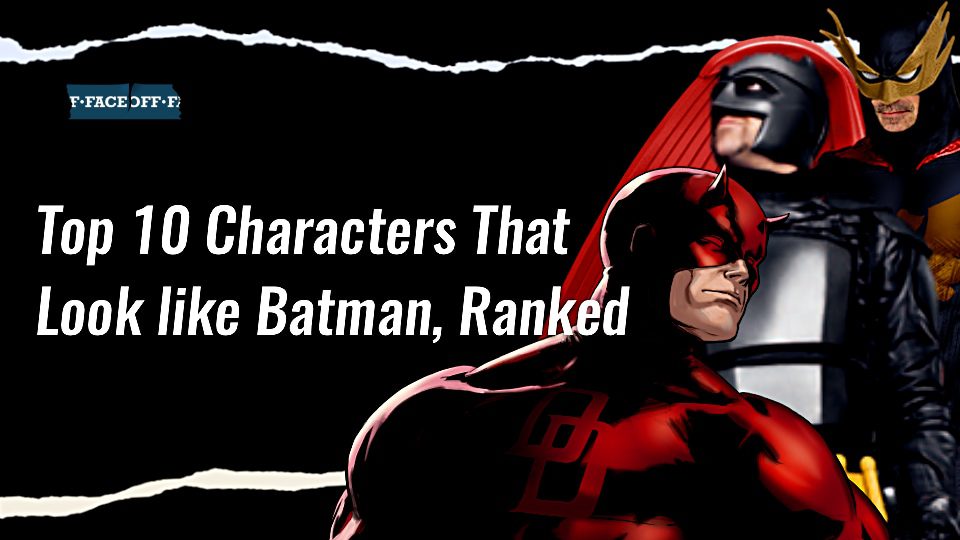 How many times have you stared at a superhero and thought, “this is a character that looks like Batman“? A lot, to be sure. The Dark Knight is one of the most popular and iconic superheroes ever. He practically kick-started the age of heroes. As such, he has inspired many throughout the decades of his existence. However, some creators drew so much inspiration from the character’s look that they created a look-alike. Of course, some Batman-Esque characters were forgotten and not seen in new adventures for years, but some curved out their own place in pop culture.

In this list, I will count down the top 10 characters that look like Batman. For obvious reasons, I will be skipping characters like Batwoman, Batgirl, Robin, Nightwing, and all the Batmans from other dimensions. So, without any further ado, let’s go!

Invincible by Image Comics has many characters who look like versions of other iconic comic heroes, especially from DC Comics. However, the character that is closest to his DC counterpart is Darkwing, who is a kind of parody of the Dark Knight. Just like Batman is the only Justice League member with no superpowers, Darkwing is the only member of the Guardians of the Globe, the primary superhero group of his universe, without any superhuman abilities.

Instead, he relies on his skills in hand combat and on a series of gadgets to fight the bad guys, who are usually street-level criminals and not super-powered foes. As for Darkwing’s appearance, his costume is basically the same as Batman’s. Their costumes both feature dark shades, a cape, and a utility belt. Also, his name is Darkwing, and that name says it all.

Netflix’s The Guardians of Justice brings us a brand new Batman analog. Atticus Payne, aka Knight Hawk, is a bitter, violent, stubborn vigilante who investigates the murder of the Superman-like Marvelous Man, leader of the Guardians of Justice group. As you can see, Hawk’s costume and cowl bear a lot of resemblance to that of Gotham’s Caped Crusader, including the cape.

Just like Bruce Wayne adopted Dick Grayson, Atticus took in Mick Mason, whose family was murdered by criminals while doing a show in the circus.  Mick Mason, aka Red Talon – or is it Red Hood? – used to work with Hawk but is now working for the president as a ruthless assassin. When Mick Mason left Atticus replaced him with Little Wing, a homage to Nightwing – Who is a twelve years old boy dressed in a costume, fighting criminals.

Just like his Gothamite counterpart, Knight Hawk seems to be ready to do what it takes to find the murderer, including repeatedly using Marvelous Man’s synthetic AI Cortex that causes Hawk permanent brain damage. To add to all these Batman similarities, Knight Hawk has a cave-like lair, known as the Hawk’s Nest, and some sort of a cool Hawkmobile.

One of my favorite characters on this list is Big Daddy from Kick-Ass. You see the resemblance between Big Daddy in the movie adaptation of Kick-Ass and Batman, right? Big Daddy wears a costume that looks almost just like that of Gotham’s crusader.

Indeed, he is a very violent version of Batman who blows the bad guys straight to hell with his guns, but still a batman-like character. He even has Hit-Girl as his twisted version of Robin! Nic Cage, who portrayed Big Daddy, even molded his mannerisms after Adam West, who played Batman in the 60’s Batman TV series.

Sue me, but I look at Space Ghost and see Batman. I know they don’t wear the same colors, and that Space Ghost doesn’t have the tiny Bat-Ears on his cowl, but they’re definitely drawn the same way. Just look at them! Space Ghost is pretty much Batman in space. An interplanetary Batman who fights for law and order, peace, and justice throughout the galaxy with his sidekick teen helpers Jan, Jace, and Blip the monkey.

Sure, as a Batman of the future he has much more developed gadgets, like the power bands he wears on his wrists that allow him flight, or his power belt that allows him to make himself invisible, but that is to be expected. Oh, and his personal cruiser, the Phantom Cruiser, looked like Bat Spaceship!

Kyle Richmond’s parents were killed in a hate crime when he was a child, and he trained his body to physical perfection to seek retribution as an adult. Sounds familiar? Nighthawk was basically created to be Marvel’s equivalent of Batman.

Like Bruce, Kyle is the heir to his family wealth, making him the richest member of his superhero team, the Squadron Supreme, which is a Marvel version of the Justice League.

Both Bruce Wayne and Kyle Richmond are skilled athletes and masters of close combat who have a wide variety of gadgets they use to fight crime usually at night. And if those aren’t enough similarities for you then get this – Nighthawk chose a man named Joaquin Pennyworth as his successor, which is spookily similar to the name of Bruce’s butler, Alfred Pennyworth.

I don’t care that they say that Nite Owl is a purposeful copy of Ted Kord, the Blue Beetle. Nite Owl is a dead ringer for Batman! He has a cowl with pointed ears and a cape. He is even named after a nocturnal hunter like Batman.

Nite Owl has some aspects that are shared by Batman, mostly the gadgets that come in handy when fighting criminals, including smoke bombs, grappling hooks, and night-vision, among others. Both are skilled inventors and mechanics. Both are vigilantes, who are masters of hand-to-hand combat and martial arts. Neither Bruce Wayne nor Dan Dreiberg has superhuman powers, but they do have large amounts of money that allow them to afford gadget-making materials.

A Marvel character that looks like Batman, Hawk-Owl is probably the ultimate Marvel take on DC Comic’s Batman. All the Batman elements are there, with some twists. Jack Danner’s family did die tragically when he was young. However, it was due to his father’s drunken driving rather than being murdered by a criminal. Like Bruce Wayne, he traveled the world to learn from the greatest martial artists.

Not only did he become a costumed vigilante, but sometime after becoming Hawk-Owl, he recruited an orphan boy sidekick and fought against his arch-nemesis in the form of a Joker. Of course, Hawk-Owl had no superhuman powers but did have an extensive arsenal that contained many weapons and gadgets.

To complete the picture, Hawk-Owl was a skilled detective with broad knowledge and understanding of the criminal underworld, like you-know-who.

A Marvel character that looks like Batman, Moon Knight has frequently been described as Marvel’s Batman. Well, I guess it’s no surprise they call him that. Moon Knight is definitely based on Batman, you can tell that just by looking at him! Moon Knight and Batman are both millionaire nocturnal vigilantes who use a series of high-tech gadgets to assist them. The two work in major metropolitan areas. Both have vehicles and gadgets shaped after their chosen motif – Bat or Moon. Both even have butlers who know their secret identities and assist them.

Neither of them is sympathetic. Both Are Expert Fighters. Both even struggle with understanding their identity as a person, separate from their identity under the costume. Just like Batman might be the darkest character in DC, Moon Knight is his equal in the entire Marvel universe. I guess that when Moon Knight arrives on Disney+, we’ll know more about their similarities and differences, but Marvel calls Moon Knight their Batman, so that says it all.

A Marvel character that looks like Batman, Black Panther is definitely Marvel’s Batman. Let me count the ways: The two of them are masters of martial arts and stealth. Both heroes are super-geniuses who strive to be the pinnacle of excellence in every field possible, science, business, martial arts, etc. They have butt loads of cash and were born into wealth and privilege. Both dress In Black and wear armor, although Panther’s armor is vastly superior to Batman’s. Bruce and T’Challa’ are both haunted by the murder of their parents which fueled them to be a champion of their respective kingdoms. Just as its Batman’s sworn goal to protect Gotham and its Citizens, T’Challa’s main goal is also to protect Wakanda and its People from threats.

Both Bruce and T’Challa have female counterparts to help them win Fights and Battles that they can’t win by themselves, as well as various other Friends. Actually, as I see it, Black Panther is the closest thing to Batman you can get from Marvel.

A Marvel character that looks like Batman, Daredevil has a lot in common with the Bat of Gotham. First, Matt Murdock is a brutal vigilante with a fierce dedication to protecting his neighborhood of Hell’s Kitchen by almost any means necessary, just like Bruce Wayne is for Gotham. Second, both are stealthy hand-to-hand combatants who rather operate at the street level, fighting common criminals, than fighting big alien invasions. Both heroes are trained Ninjas who face off with famous Ninja Clans – League of Assassins in Batman’s case and The Hand in Daredevil’s. The two are at the peak of human physicality.

Bruce and Matt are in love with female criminals – Catwoman and Elektra Natchios. They share traits like using the shadows to their advantage and the no-kill rule under any circumstances. Just as Bruce took on the appearance of a bat to strike fear into the heart of Gotham’s villains, Matt started dressing like a devil to put the fear of God into the sinners of Hell’s Kitchen. Oh, and don’t those little horns on Daredevil’s helmet really resemble the Bat-Ears on Batman’s cowl? Just saying.