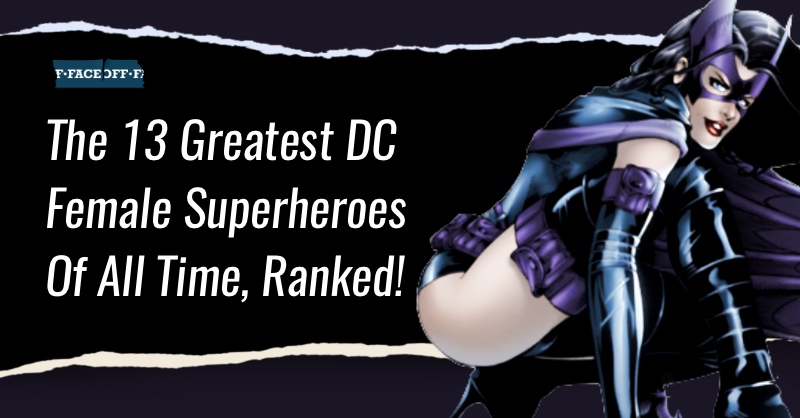 As this is NOT a countdown of DC’s female supervillains (and DC has quite a lot of them, Catwoman, Killer Frost, and Cheetah to name a few), all the characters on this list are do-gooders. And no, Harley Quinn does NOT count as a do-gooder in our books. So, without further delay, let us get to it!

Starting this list of the Greatest DC Female Superheroes is the purple superhero Huntress, aka Helena Bertinelli. The Huntress was created by Joey Cavalieri and Joe Staton and introduced in The Huntress #1 released in 1989 by DC Comics.

Born into one of the families of the Gotham City Mafia, Helena was kidnapped at the age of 6 and assaulted by members of a rival mafia, and then witnessed her entire family killed at the age of 19.

This is what pushes her to take up the mantle of Huntress and run a crusade against the Mafia. Upon her masquerades, all of her anger from the murder of her parents, and her sexual abuse by the mafia at a young age, The Huntress becomes increasingly hostile and violent.

At some point, The Avenging Archer crosses paths with Barbara Gordan, Catwoman, and Batman who become her mentors. After butting heads with the team she is deemed too unpredictable and brutal by Batman. The Huntress has had affiliations with the Justice League and the Birds of Prey, where she is now a mainstay on the team.

The original Question was Vic Sage—others over time used the name and/or mask, but mainly it was Vic. At some point, Vic sought out Renee Montoya, a detective in the Gotham City Police Department, and began to mentor her to become his successor.

After his death, Montoya took Vic’s name, the Question, operating alongside Batwoman, and with some members of the Birds of Prey led by Oracle (who is also on this list). Renee is one of the most skilled and determined detectives ever.

She is a master combatant having been trained by Richard Dragon, one of the world’s greatest martial artists, and his pupil, Vic Sage. She wears a mask that binds to her face with the use of a proprietary binary gas, rendering her impossible to identify in costume.

Hawkgirl (real name Shiera Sanders Hall) is the reincarnation of Priestess Chay-Ara from Egypt. This superhero always appears as the partner/lover/spouse of Hawkman, her male counterpart, as they are destined to keep finding each other and falling in love.

She owes her special powers to her Nth Metal Harness which allows her several abilities (such as flight, speed, durability, etc). Also, she has the unique ability to be magic-resistant, which means that every other magic attack against her can be countered by Hawkgirl, making her a figure for all magic-based characters to fear.

Hawkgirl is a brave warrior (And a cartoon babe), known for her signature war cry ad her Nth Metal mace, which is her weapon of choice. Her abilities and courageous personality have made her a member of the Justice League and the Justice Society.

At Number ten we have the blue and yellow superhero Big Barda, a New God from the planet Apokolips, which is ruled by the dark lord Darkseid. Along with everyone else in her world, Barda was Darkseid’s soldier. She even led his female battalion, the Furies, the most elite force on Apokolips.

However, once she met Mister Miracle and fell in love with him, she defected from Darkseid’s army and became a force of good, establishing a life with him on Earth as husband and wife. Together, Mister Miracle and Big Barda make one of the greatest couples in comics.

Thanks to her New God Physiology, Big Barda is crazy strong (notably stronger than her husband, actually). She was trained to be an elite warrior in Grannie Goodness Happiness Home on Apocalypse, one of the harshest environments in the multiverse.

Kathy Kane, aka Batwoman, was designed specifically as a love interest for characters like Batman as a means to dispel the rumors about a homosexual relationship between Batman and his sidekick Robin.

However, the present Kate Kane was presented as a lesbian from her very first appearance, and she was portrayed as having been in a longstanding relationship with detective Renee Montoya of Gotham City police.

Batman was the one who inspired her to become a masked vigilante. In her crime-fighting activities, she uses a red-and-black suit that incorporates features similar to Batman’s own Batsuit. Her cape is made from a composite nanotube material and has sharpened edges that allow it to be used as a weapon in addition to its gliding function.

One of the most powerful redhead Teen Titans superheroes, Starfire (real name Koriand’r) is an alien princess from planet Tamaran. Her older sister, who lacked the skill of flight that rulers of Tamaran needed to have, usurped the throne and enslaved Koriand’r. She was eventually able to escape, finding her way to earth and joining up with the Teen Titans.

Besides her flight ability, Starfire can shoot star bolts that can kill with one hit, but she can control the beam so that it barely stuns you if she wants. She is also strong as hell and has incredible resistance. In short, Starfire is one alien who you definitely wouldn’t want to cross.

The blonde-haired girl Dinah Drake grew up as a street kid in Gotham City until she was taken in by Desmond Lamar, the owner of a local dojo. Desmond became a father figure to her and took her on as a student at his dojo.

She later became a member of the military strike squad called Team 7, where, during one of the team’s missions, she gained the ability to create a deafening scream called the “Canary Cry”.

She returned to Gotham City and became one of the founding members of the all-female superhero team of crimefighters known as the Birds of Prey.

As a vigilante, she took the codename Black Canary. How powerful is the Black Canary cry, you ask? Well, when Black Canary screamed at Superman, blood came out of his ears. We guess it means it’s pretty damn powerful.

Zatanna is a Homo Magi, which means she belongs to a sub-race of naturally magic-wielding humans. She was raised by her father, who was also a famous magician. When her father disappeared she investigated until she found him, but the reunion didn’t last long before he was killed.

Like her father, Zatanna casts spells by speaking what she wants backward (For instance, saying “pots” would cause the target of the spell to stop in their tracks). She is a very strong magic user, basically the Superman of Magic, and one of the most powerful sorceresses in the DC universe.

Zatanna is able to alter reality on scales that are unimaginable. Besides her ability to cast spells by speaking backward, Zatanna can also cast magic without speaking (speaking backward is a way to focus her magic.

It has also recently been disclosed that speaking her spells backward also hides the use of magic from the dark ones on the other side of the source wall). She has the look and powerset to be an A-list DC superheroine and we’re looking forward to the moment DC gives her the push she deserves.

Making it to the top five DC female superheroes is the dark girl Raven from Teen Titan. Half-human from her mother’s side, Half-demon from her father (Trigon), Rachel Roth is a teenage girl who retains vast supernatural powers.

Once Raven understood that her father plans to use her to come back to Earth and take over the world, she had to learn to control the darkness inside of her. Raven’s powers come from her father’s demonic lineage.

Her primary power and the source of many of her “sub-powers” is the ability she has to summon her “Soul Self”. Her soul-self is an astral projection of her soul, usually in the shape of a shadowy bird. She can project her consciousness into her Soul Self, allowing her to think and talk from it. The Soul Self can act independently from Raven’s physical body, with each performing separate tasks (both are still Raven, though).

She is also a powerful empath who can use her Empathy to absorb, sense, and control the emotions of others for different effects. Raven can see into someone’s heart, soul, and mind and can influence their consciousness and feelings.

Y’Mera Xebella Challa usually referred to as Mera, is Aquaman’s wife. Originally a supporting red hair character of Aquaman, in recent years Mera is just as important as Aquaman himself at times, and ever since the New 52, she is always by his side as his most important supporting character.

She is the princess of the underworld kingdom of Xebel, who left to go find Aquaman and assist him to usurp the throne of Atlantis from Prince Orm Marius. Mera and Aquaman then fell in love, forging a deep emotional bond that has lasted decades.

Mera is a very powerful superheroine, as she is basically Aquaman plus Magic powers. She’s probably in the top tier of power sets for DC, somewhere between Martian Manhunter and Superman.

In fact, at one time the Justice League confronted her and she quickly took down Superman, Wonder Woman, two Green Lanterns, The Flash, Cyborg, and Batman. With no prep time or battle plan.

The famous blue female superhero, aka Supergirl and the Girl of Steel, was born on planet Krypton. Kara was rocketed to Earth to save her life from Krypton’s explosion.

Like her cousin Superman, Kara possesses vast powers given by her Kryptonian physiology. She has Solar Energy Absorption, Heat Vision, X-Ray Vision, Superhuman Strength, and of course Flight.

In some ways, Supergirl is a more intriguing and complex character than Clark/Superman, because while Clark doesn’t remember his planet, Kara does, and has to live with that guilt and loss every single day.

She remembers two homes and has to fight for her new one no matter how hard it is. However, she does her thing beautifully and that earns her a spot in the top three of this list.

Though many women have shared the Batgirl title, DC’s most iconic cat girl is no doubt Barbara Gordon, daughter of Gotham Police Commissioner James Gordon.

In her civilian identity, Barbara was a librarian and computer expert. After some time she spent as the vigilante Batgirl, she retreated from her role, but soon after she was shot in the spine by the Joker. She was paralyzed and had to give up her Batgirl identity.

Looking for other ways to fight the rampant crime that plagued the city, Barbara became an elite computer hacker known as Oracle.

Years later, Barbara underwent surgery and received a cybernetic implant that fully recovered her and allowed her to return to her position as Batgirl.

A demigoddess, daughter Of Zeus, and Hippolyta queen of the Amazons. Diana of Themyscira is one of the most dreaded warriors in fiction. She chose to leave Themyscira, an island of paradise, in order to save others, be a beacon of truth in the world and help others become a force for good.

After leaving for Man’s World, Diana was granted various powers by the Gods, including Superhuman Strength, Superhuman Speed, and reflexes. She is a leader, a tactician, and an ambassador.