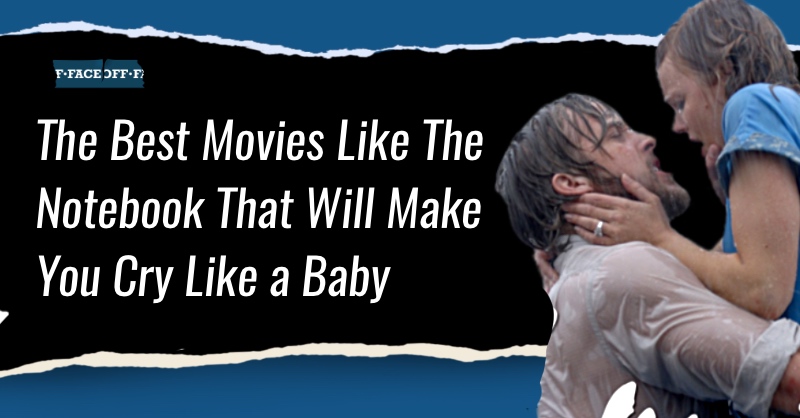 If you are on a quest to find movies like The Notebook to fill you with teary eyes and endless “Oh! Moments”, then get ready to hide away the tears! That’s right, I accumulated a list of the best 15 romantic movies to warm the cockles of everyone’s hearts. Nick Cassavetes’ 2004 cult movie did to Gosling’s career what the Titanic did to Leonardo DiCaprio’s career. Since starring in The Notebook, he has become Hollywood’s biggest star. Ryan is the man that men want to be, and women want to be with. A young American couple Noah and Eli (Ryan Gosling and Rachel McAdams), meet at a carnival in the United States in the 1940s. They fall desperately in love with each other.

World War II ends the romance with Noah, who is drafted into the war. They meet again only seven years later when Noah returns from the war he reveals to his great surprise that his lover, Eli, is already engaged to another man. While it is obvious that Eli still has many strong feelings for Noah, it is not clear, if she will make the required leap back into his arms. Want to find similarly-themed romantic films? Then read on to find out my recommended movies like The Notebook.

Tom (Joseph Gordon Levitt), is a hopeless romantic guy who writes greeting cards for a living. When he meets Summer (Zooey Deschanel), he falls for her head over heels – until she dumps him. Tom is miserable, and throughout his depression, he is doing a post mortem of their relationship –  he looks back on their 500 days together and tries to figure out the best and bad moments they shared together. Such a wonderful smart journey through the footsteps of a romance, similar movie to The Notebook from the sweet beginning to the bitter end. Great performance by Levitt and Deschanel.

Cameron (Joseph Gordon Levitt), would like to go out with Bianca (Larisa Oleynik), but her overprotective father is not ready for his little girl to go out with guys before her older sister does. The problem is, that her sister Kat (Julia Stiles), hates the world, guys, and going on dates. Cameron is recruiting the bad boy of the neighborhood (Heath Ledger), to go out with Kat, hoping it will solve his problem, and he would be able to go out with her sister.  A classic Nineties rom-com with the late Heath Ledger in another charismatic performance. this movie is a family and romantic entanglement from the beginning till the end.

When Gerry (Gerard Butler), the husband of Holly Kennedy (Hilary Swank), dies from an illness, she loses the love of her life and does not know how she will continue without him. Knowing how hard Holly will take his death, Gerry plans ahead, trying to think out of the box how to assist his wife continue with her life without him. Beginning on her 30th birthday, she receives the first in a series of letters, written by him, designed to ease her grief and encourage her to move forward to a new life.  P.S I Love You is like The Notebook is a romantic comedy that will make you laugh and cry simultaneously, you will be flowing with the script and moments of romance. It’s a movie that you can see over and over again, a movie that is just exciting and amazing, no matter how many times you see it, it will sweep you over and over again.

In 1981 in Los Angeles, 11 years old Monica (Sanna Lathan), and Quincy (Omar Epps) are both Neighbours and basketball players – they both want to play in the professional basketball league, like Quincy’s dad who is already in the NBA. The love-hate relationship between them takes place on and off the field and lasts into high school. During high school, they become a couple, until the relationship between Quincy and his father deteriorates and causes the young couple to separate. Years later, when they are both professional basketball players, they meet for one more game, in which the real result will be more complicated than who won and who lost. A sweet and sporty love story, so romantic and well crafted. This is one of those movies you can watch several times and memorize the dialogues.

John Sullivan (Joel McCrea), is a successful comedy director who decides to create a meaningful, socially conscious film. He decides he must go live with real people, and learn about poverty and suffering firsthand. He disguises himself as a wanderer and begins a journey, joined by a young and desperate actress (Veronica Lake). After getting acquainted with the ugly side of America, which includes stealing vehicles, staying in shelters, starving for bread, and even imprisonment with hard labor, the two return to the hot lap of Hollywood, and Sullivan becomes a hero. This movie is so funny and relevant even today. Sharp dialogues, great actors – beautiful classic to go back to.

Robbie Hart (Adam Sandler), is a singer who performs at weddings, where he meets Julia (Drew Barrymore), a beginning waitress. They find a common language because they are both engaged and about to marry their spouses. When Robbie’s fiancée abandons him before their wedding, Julia is trying to comfort him and they get close. Meanwhile devastated Robbie, starts ruining every wedding he performs at. When Robbie realizes that he is in love with Julia, his mission now is to convince her not to marry her partner, but to plan their own wedding. A feel-good movie that gives hope to every abandoned person. So romantic and funny, with Sandler at his best films and Barrymore in another mutual great performance.

Truvy Jones (Dolly Parton), owns a beauty salon in a small town in Louisiana. She works hard to support her family while her husband Spud (Sam Shephard), works temporary jobs and is often unemployed. Truvy hires Annelle Dupuy (Daryl Hannah), who came to town after her husband got involved in crime and ran away from her. Over time Annelle is getting used to the small town and getting closer to religion until she becomes a devout Christian. Jones often hosts Shelby Eatenton (Julia Roberts), and her mother M’Lynn (Sally Field). Shelby is preparing for her wedding with Jackson (Dylan McDermott), a wealthy lawyer who loves her and agrees to marry her even though she suffers from diabetes type 1 – she is dependent on insulin and doctors have warned her that if she gets pregnant, she will risk her life. After their wedding, Shelby doesn’t obey her doctors’ warning and gets pregnant with her first child.

Steel Magnolias is one of the 80s best, everyone saw it, and it was an Academy Award nominee. With a beautiful charismatic women cast – strong actresses and amazing ensemble performance, this movie is a true must.

Dean (Ryan Gosling), drop off from high school and works as a carrier, Cindy (Michelle Williams), is a girl who dreams of studying medicine and lives with her unhappy family in Pennsylvania. They meet when Dean moves his belongings to a nursing home where Cindy’s grandmother lives. They fall in love, and even though Cindy’s father objects to their relationship, they get married when they learn that Cindy is pregnant by her previous boyfriend Bobby (Mike Vogel), and Dean is willing to help her raise her daughter. A few years later, Dean, who works as a painter, and Cindy who works as a nurse, are raising their daughter Frankie, but having a hard time maintaining the love that has blossomed between them in the past. Dean decides to take Cindy to a motel for the weekend, in hopes of restoring their marriage, but soon the relationship between the two deteriorates.

Blue Valentine is a realistic and bitter storyline, everyone can relate to. Gosling and Williams in authentic performance, you just can not stop watching. If you are looking for movies like The Notebook, this is the movie for you.

Jesse (Ethan Hawke), a young American, meets Celine (Julie Delpy), a French student while traveling by train from Budapest to Vienna. The developing conversation between them stimulates their minds and senses and Jesse does his best to convince Celine to spend her last day with him before returning to the US. During this day, they tour Vienna and its cafes and talk about art, philosophy, and love, as their conversation and acquaintance get closer, saying goodbye in the morning becomes harder. Before Sunrise has romance, philosophical and thrilling dialogues. It has a beautiful storyline, Delpy and Hawke are really convincing.

Greg (Thomas Mann), is a high school student who tries to avoid meaningful social connections in order to survive in the social world. When his mother insists he spends time with Rachel (Olivia Cooke), a cancer-stricken girl from his class, he discovers the value of true friendship. This movie will make you laugh and cry, it is emotional and very smart, you will take the dialogue with you for a long time after the movie has ended.

See also: Best 9 Movies Like Diary Of A Wimpy Kid

A love story between a bull rider farmer (Scott Eastwood) and an art student (Britt Robertson) woven into the memories of an elderly Jew (Alan Alda). The plot depicts two love affairs in two different timelines, the aspirations, and obstacles in their path, and the sacrifices required for their existence. Present and past stories are parallel lines and the most important lesson we learn from the Longest Ride is that in a relationship one must compromise and sacrifice. Finally, there is a nice twist. Those who are looking for originality or brilliance can skip this one, but on the other hand, romantic souls will rejoice.

​​In the summer of his 10th grade, Hudaka decides to run away from his home to a remote island near Tokyo. Financial and other difficulties push him to his limits. The weather in his hometown is gloomy and rainy and Hudaka lives his life in solitude, luckily he finds a job as a reporter for a mysterious magazine. One day, he meets a girl named Hina on a street corner – a smiling and determined girl, with a special power – the power to control the weather. Beautiful animation, enchanting fantasy, and fascinating storyline.