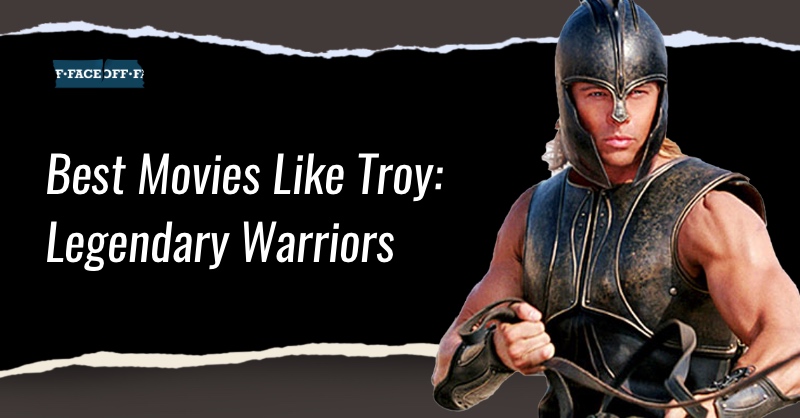 If you’re a sucker for films based on historical, or mythical events with legendary warriors, then search no more! I curated this list of the best movies like Troy that will quench your thirst.

Based on the masterpiece ‘The Iliad’ by the Greek poet Homer, inspired by the legendary Trojan War, Troy brings to the big screen the wide-ranging story of the well-known historical / mythical war, in all the glory and technological capabilities of modern cinema.

Troy is like a huge epic that meets all the rules of the “Sword-and-Sandal” genre. We get Brad Pitt at his best, as madness has always taken the most out of him. But The real star of the movie is Hector, played by Eric Bana who manages to load huge accumulations of emotion within a one-dimensional character.

A great Samurai warrior serves his Shogun (A military dictator). When time passes the Shogun thinks everyone around him would like to take the lead, he even suspects his Samurai and hires some Ninjas to kill him.

The ninja warriors fail, but they kill his wife. After her assassination, the warrior goes on a journey with his son looking for revenge.

An action and adventure movie, but it is also very emotional. It was filmed in a very unique way with warm colors and a very special atmosphere.

Ridley Scott returns to the past with a knight movie and this time starring the young British actor Orlando Bloom. The film takes place during the Crusaders, through the story of a young Frenchman who discovers his destiny as a knight.

The Last Samurai is without a doubt one of the most spectacular films seen in theaters in recent years. A historical epic is reminiscent of the great Hollywood films of the fifties and sixties. A spectacular production that utilizes all the technological capabilities available today to give the viewer a great viewing experience of life.

Based on real events in the history of Scotland’s struggle for freedom.
Mel Gibson is William Wallace, a young man who becomes the leader of the opposition to foreign rule in Scotland. His wisdom, courage, and charisma lead to a tremendous struggle for faith in the power of the heart and will and finally to a great victory.

The 13th Warrior – An adventure Viking film based on Michael Creighton’s bestseller from 1976. Ivan Padlan, a tenth-century Arab poet and traveler who falls in love with the king’s wife, is revealed to the king, and the above is expelled from the rich and pastoral kingdom. In an attempt to save his life, he goes on a journey as a messenger of peace.

Kubrick deals with the eternal struggle of man for his freedom. The film combines touching drama, political intrigue, and spectacular battle scenes, and the result is a fascinating classic about love, courage, and commitment, dubbed by critics the first intellectual epic since the silent film era.