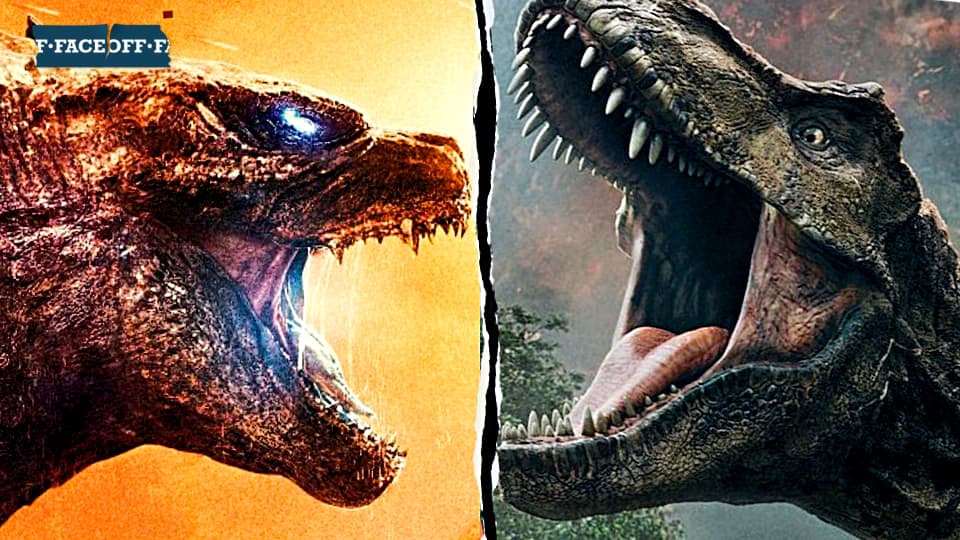 Jurassic Park and Godzilla are two of the greatest movie franchises of all time. The 2014 Godzilla movie grossed $529 million worldwide and the Jurassic Park 1993 movie received more than 1 billion dollars all-inclusive. The two franchises share a lot of similarities, such as both being from the “monster movie” genre, and both dealing with man’s hubris, trying to mess with things they don’t fully understand.

In this Faceoff, we explore these similarities and differences head to head to find out which franchise has the best characters and creatures, and which is the most iconic. Our analysis will include all the movies in the Jurassic Park film series and all of the films under Legendary Picture’s MonsterVerse umbrella.

Don’t forget to vote in the polls below.

Jurassic Park vs Godzilla: The Adventurers

The ragged-looking guy you wouldn’t want to get in the way of. A man who knows the outdoors better than anyone else. Both franchises have this guy.

In Jurassic Park, it is Dr. Alan Grant, a famous paleontologist who is invited to Jurassic Park to ensure its safety before the park’s official opening in a few weeks. When the crisis in the park occurs, Grant remains perfectly levelheaded and protects the children.

James Conrad is a former soldier who acts as a tracker for an expedition to Skull Island. His job is to make sure the expedition makes it off the island alive. Conrad is courageous and has excellent survival skills and an understanding of nature.

Q1. Which one of these adventurers would you hire to lead you through the jungle to find the Aztec treasure: Alan Grant or James Conrad?

Jurassic Park vs Godzilla: The Scientists

Every franchise that is trying to ground its claims in science needs a scientist guy who knows all and sees everything and is never, ever wrong about anything.

Our two franchises are no different. Dr. Ian Malcolm is beautify played by Jeff Goldblum, who already gained some great monster movie experience in The Fly 1986 film. Ian Malcolm is a world-famous mathematician who specializes in Chaos Theory. His job is to notice any problems with the dinosaur theme park, Jurassic Park.

From the first moment, Malcolm has a gloomy forecast for Jurassic Park that turns out to be true.  His signature line, “Life finds a way” relates to the Chaos theory and means that species will always find a way to reproduce, even in nature’s toughest conditions. Nature is far greater than man, it has power beyond our control.

Portrayed by the acclaimed Bryan Cranston, Joe Brody is a nuclear physicist, who lost his wife during a major breach in the Janjira nuclear power plant in Japan. He became obsessed with trying to find out what really happened to cause the breach, convinced that it was not caused by a natural disaster.

Of course, it turns out later he was right about that, as the breach was initiated by a massive, radiation-eating primordial monster, called MUTO, which was hatching beneath the base station.

Q2. Who is the better scientist: Dr. Ian Malcolm or Dr. Joe Brody?

Jurassic Park vs Godzilla: The Kings

“Tyrannosaurus” is Greek for “tyrant lizard,” and “rex” means “king” in Latin. So, the T-Rex was basically “King of the Tyrant Lizards.” With Godzilla being the King of the Monsters, we defiantly have a royal battle going on.

The T-Rex is a bipedal carnivore with a massive huge skull with gigantic very sharp teeth. It also has a very long heavy tail. Godzilla, on the other hand, is a merger of different types of dinosaurs. The concept for Godzilla was, in fact, a mixture of a Stegosaurus and a T-Rex.

Of course, we can’t have these two creatures meet each other on the battlefield, because Godzilla would crush the T-Rex like a chicken. Godzilla is way bigger in any iteration and has supernatural powers, like his Atomic Breath and feats like surviving orbital drops.

Even if they were the same size, the T-Rex simply has no chance in this department. So, to give the T-Rex a chance, we’re going to ask a different kind of question about them.

Q3. Which picture is more iconic: Tyrannosaurus Rex or Godzilla?

One of the scariest dinosaurs in the franchise, the Velociraptor is highly intelligent and clever enough to use tactical flanking techniques to take down prey. They are also large and quick, but the cherry on top is a pair of razor-sharp toe claws that can shred prey to ribbons.

As for King Ghidorah, this extraterrestrial dragon can fly, shoot lightning out of his three mouths, and do some real stomping damage as well. Ghidorah is resourceful and capable of tactical fighting and improvisation.

Q4. Which one of these reptiles is smarter: Velociraptor or King Ghidorah?

Jurassic Park vs Godzilla: The Sky’s the Limit

Both franchises present some impressive flying terrors. The Pteranodon is a fearsome flying predator of immense size. As shown in Jurassic Park III, it was capable of grabbing humans like featherweights and carrying them off to be devoured.

Rodan has incredible resilience and is resistant to heat. However, his true strength lies in his speed and power of flight, as he flies at super-sonic speeds exceeding that of jets.

Q5. If they were the same size, who wins in a dog fight: Pteranodon or Rodan?

Oh, the colors! Though variegated and beautiful, the Dilophosaurus in Jurassic Park is depicted as an acid-spitting lizard, capable of blinding its victim with its venom and paralyzing it.

However, this is an ability that does not exist in the real Dilophosaurus. It did have sharp teeth and very developed evolutionary hunting abilities. Mothra is absolutely iconic. Her offensive techniques are astonishingly varied and she is always willing to sacrifice herself for the greater good.

What more can we ask from the Queen of the Monsters?

Q6. Which creature is more beautiful: Dilophosaurus or Mothra?

Samuel L. Jackson has starred in Hollywood’s biggest franchises from Star Wars to Avengers, and Jurassic Park and the Monsterverse are no exception.

In Jurassic Park, Jackson portrays Ray Arnold, chief engineer of the dinosaur Park. Well, at least until the Velociraptor eats him. Arnold’s line, “Hold on to your butts”, has become a popular quote.

In Kong: Skull Island, Jackson is Lieutenant Colonel Preston Packard, commanding officer of the Sky Devils helicopter squadron who flies the expedition to Skull Island. Packard is intensely loyal to his troops, so When Kong kills some of his men during his initial rampage, Packard goes on a maniacal quest to kill Kong out of vengeance.

That is until the giant ape crushes Packard to death under his fist.

Jurassic Park vs Godzilla: The Companies

Never trust an organized entity! Even if they somehow mean well, they eventually mess things up. It’s hard to blame InGen for trying to resurrect the dinosaurs.

Heck, it’s every child’s dream to see these reptiles alive. However, like most outrageous plans invented by eccentric billionaires like John Hammond, this plan was better in theory. In Apex’s case, their plan to rid the world of the Titans so control could be returned to humanity could be interpreted as a good thing for humankind.

However, they ended up doing much more damage than good, and it is quite obvious that Apex was riddled with conspiracies and corruption.

Q8. In which company would you rather be C.E.O: InGen or Apex Cybernetics?

Multi-billionaire corporations like InGen and Apex Cybernetics can certainly afford breakthrough technology in the form of futuristic transportation. The Jurassic World theme park allows visitors to enjoy the thrill of witnessing actual dinosaurs by traveling in a glass-encased Gyrosphere.

The glass of the Gyrosphere is supposed to be invulnerable and even protect the tourists from the venomous spit of a Dilophosaurus. However, as we all know, it failed to withstand the jawbones of an Indominus Rex.

The Hollow Earth Anti-Gravity Vehicle, aka H.E.A.V, is an aircraft specially created to cross the gateway into the Hollow Earth realm that appeared in the movie Godzilla vs. Kong. The hovercraft is equipped with four mobile anti-gravity turbines that allow it to float and move around.

Q9. Which vehicle would impress your girlfriend the most: Gyrosphere or H.E.A.V?

Yeah, we know Ebirah never appeared in the Monsterverse, but it did appear in the Godzilla series film Ebirah, Horror of the Deep. Besides, it’s too much fun to pit these two aquatic giants against each other to give it up.

Ebirah is a giant crab who guards an island called Infant Island and murders anyone who tries to enter or leave it. He has really strong claws and is a skillful underwater creature. He stands 50 meters tall and weighs 23,000 metric tons.

Q10. Who wins in an underwater death Match: Mosasaurus or Ebirah?

Jurassic Park vs Godzilla: Which Is Better? Vote Below