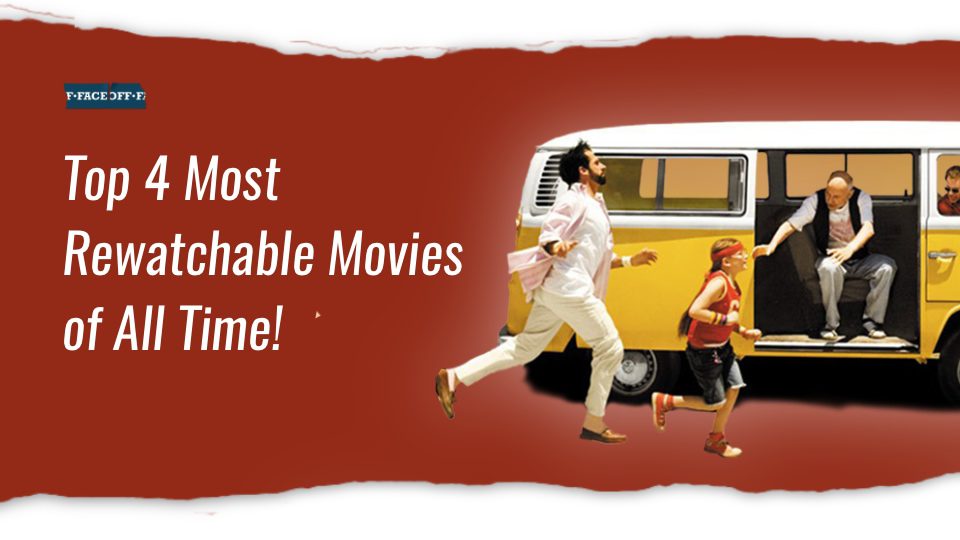 There are some movies that spread a specific kind of magic in the air. It does not matter how many times you watch them, you still keep going back to them. Those are your comfort movies or perhaps guilty pleasures, whatever you like to call them, these films are definitely one of the most rewatchable movies. There is an endless list consisting of new releases that we can easily spend years watching without running out of them. But we have to admit, there is something special about some of those movies that keep coming back again and again.

The uniqueness and timeless nature of these movies make them so amazing. They are comforting to watch and act as an escape from our day-to-day hectic routine. This is why we have picked some of the best movies that you can watch as many times as you want without getting bored of them.

However, before you put them on, of course, you want to make sure that nothing, and yes, absolutely nothing becomes a hindrance between you and the films you love to watch. This includes your internet connection. If you plan to have a smooth experience while streaming the films we have mentioned below then we suggest you look into the internet plans and packages of Charter Spectrum because all of them include unlimited data allowance. Also, can we just appreciate the amazing download speed that is up to 200 Mbps?

With that being sorted, let’s move to the exciting part and talk about the most rewatchable movies of all time.

Alicia Silverstone and Paul Rudd spread their magic in this classic romantic comedy. The film follows our main character Cher, who is filthy rich, and socially successful but quite shallow and superficial at the same time. She is the queen b of her Beverly Hills high school. Cher is of the view that she is an excellent matchmaker since she successfully manages to coax two of her teachers into dating each other.

The success gets into her head, she decides to give a makeover to the new clumsy and a socially awkward student named Tai. As a result of it, Tai ends up becoming more popular than Cher and Cher begins to realize that her ex-stepbrother has been right about her misguided tactics. Also, she ends up falling for him.

This film gives you a taste of Greek culture in all its originality. The film tells the story of thirty-year-old Fotoula “Toula” Portokolos and Ian Miller. Toula belongs to a loud, big, and quite intrusive Greek family that expects her to get married and have children. Toula works in her family’s restaurant that is founded in Chicago but this is not her dream. Toula wants more from her life.

After taking a job at the travel agency of her aunty, Toula falls madly in love with Ian. Ian is perfect in every way; he is tall, handsome, and caring but he is not Greek. This poses multiple problems for the couple as Toula believes that Ian not being Greek and vegetarian would pose a challenge for them.

We Jumped the Shark When Little Miss Sunshine Came Out! This emotional yet adorable movie takes us on a journey with the Hoover family. When seven years old Oliver gets to know that she has been qualified for the contest of the Little Miss Sunshine. After getting the news, Oliver and her family set on a journey in their VW camper van for the trip to California.

Her family is quite dysfunctional, to say the least. This includes her somewhat sane mother, her father, her brother, who has not said a word in almost nine months, her grandfather who likes to swear, and then her uncle who recently tried to commit suicide.

This is a journey of a family that comes together after going through shared grief, loss, and so many adventures.

10 Things I Hate About You is the reason why we fell in love with Julia Stiles and Heath Ledger. Kat Stratford is a young, smart, beautiful, and quite an assertive girl that is unlike kids of her age. She is not interested in dating and does things she likes to do. Also, she does not attract many boys. However, her younger sister Bianca wants to date and according to the rule set by their father, she cannot date until Kat does.

So, after pulling some strings, Kat crosses her paths with the handsome Patrick, who by the way, is not like the other guys in the school. He is rude and many controversies surround his entire persona. But the opposites attract and they end up falling for each other but it never ends like you want it to be, right? For this, you need to watch this movie again to refresh your memory.

There are some movies that you can watch as many times as you want and still not get bored of them. The aforementioned ones fall in that category and we are sure you already love them, just like we do.