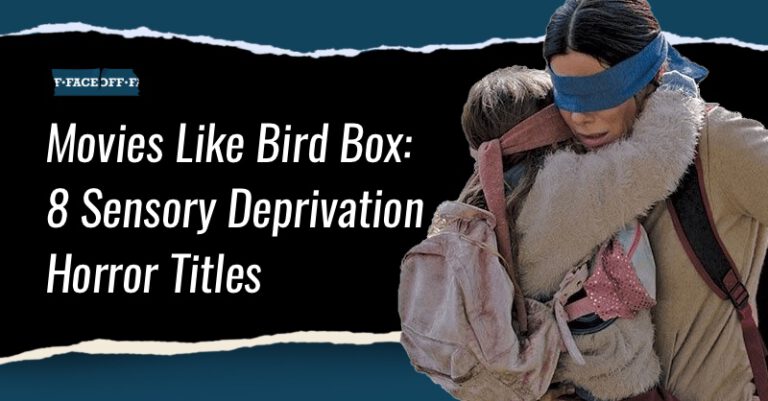 The most notable films of recent times depict a post-apocalyptic reality, in which a small group of survivors is required to be resourceful in order to deal with the desperate situation and survive. If you liked Bird Box, or if you’re a fan of post-apocalyptic survivalist films, you are probably now searching for similar horror themes. Look no further! we dug into the depths of the streaming empires (like Netflix, and Amazon+) and composed a list of 8 movies like Bird Box.

Bird Box is based on Josh Mellerman’s book on a post-apocalyptic world where a malicious entity causes anyone who looks at it to lose it and commit suicide. Fear leads people to shut themselves in their homes (the creeping entity only walks outside). and get out only when their eyes are covered. Or in other words: get along without the sense of sight.

At the center of the plot is Mallory (Sandra Bullock), who tries to survive against all odds. The film takes place in parallel: the present – where Mallory tries to get to a safe place with two children called “boy” and “girl”, and the past – five years before, when all the inferno began and Mallory had to join a bunch of strangers to survive.

Netflix’s 2018 horror thriller can easily be put into the genre that has been emerging in recent years – Sensory Deprivation Horror. The main component is based on eliminating at least one sensor to amplify the horror effect.  Check out the list of similar films below.

Starting off our list of movies like Bird Box, we have John Krasinski’s film, which conquered the top us box office chart. Krasinski also stars alongside his life partner Emily Blunt.

A Quiet Place tells the story of a couple living in a post-apocalyptic world where survivors are hunted down by horrific creatures. They try to escape their clutches with their son and daughter. The daughter is deaf by birth and is played by Millicent Simmonds.

The creatures, it turns out, are blind, but to compensate for that, they have sharp ears and they locate their prey by the sense of hearing. Therefore, the protagonists of the film must find other ways to communicate with each other.

Alongside the less successful segments, A quite Place is an original, surprising, powerful and thought-provoking horror movie.

The subject of isolation is a well-known cinematic motif. The plot sounds like a hybrid between two horror masterpieces – George Romero’s Dawn Of The Dead (Zombies in the mall, for those who haven’t seen it yet and it’s time to see it) and John Carpenter’s The Fog. A group of civilians is trapped inside a large supermarket, while a mysterious fog casts a punch on their lovable resort town, and out of the fog come very strange things, eating, splitting, and just doing naughty things to the townspeople.

This is, without a doubt, one of the best American cinema films of recent years.

Written and directed by Mike Flanagan along with actress, Kate Siegel, and John Gallagher Jr.
Due to an illness as a child, a young girl loses the ability to hear and speak. She finds herself besieged in her secluded home when a psychopath walks around outside and plays with her a morbid game of cat and mouse.

Flanagan and his director of photography James Kniest invested a lot in the mise-en-scene and framing and picked up some very impressive shots. Hush takes place indoors, or in its immediate vicinity, and for a moment does not feel recycled. It’s a very dynamic movie like Bird Box. It suffers from some absurd moments, and recycled scenes we’ve all seen before, but they soon give way to other, sweeping and effective scenes.

Every director’s dream is to make a horror movie. Don’t Breathe is the second full-length film by Federico Álvarez, an Uruguayan director who first dived into the deep water of horror when he directed the remake of the cult film Evil Dead (2013) by Sam Raimi.

Rocky is determined to escape from an abusive mother to save herself and her little sister from the miserable and inevitable existence. She and her two friends Alex and Manny manage to raise enough money in a series of well-planned hacks to leave Detroit. They have amassed a small amount of money thanks to their petty crimes and when the trio discovers that a blind man living in an abandoned neighborhood is hiding a small treasure in his house, they decide to go for their latest and greatest operation. But the plan goes completely awry when their victim becomes much scarier than expected. The blind man lurks for them in his fortified house and they are horrified when they discover that he is hiding much more money in the house.

The blind man never ceases to amaze, and his every appearance in the frame freezes the blood. It evokes fear and permeates despite its blindness, which the film plays perfectly. It is also worth noting the pace of the film, which begins with a dynamic and fast exposition. In a short time, we already know the characters and go straight into the action. We soon move from a slight curiosity to a nerve-wracking tension, and from the moment the film catches on, it hardly releases for almost a moment, until the end.

If the corona quarantine caused you to lose any signs of humanity, due to the boring home routine, this Swedish film will make it a bit more interesting. The new Netflix thriller Red Dot tells the story of Nadia and David, a young couple who go on a romantic camping trip that becomes the struggle of their lives. The two set up a tent in a secluded area and suddenly discover that a red dot-like that of a laser sight – appears on the tent and continues to follow them throughout the night. They must escape the possible danger when they are in the middle of a snowy wilderness, and as if that’s not bad enough – their past also returns to haunt them in those chilling moments.

To avoid spoilers, we will stop here, and just note that the film also contains violent scenes that give a clear resemblance to Don’t Breathe. Red Dot is not a masterpiece, but at the same time, it does not fall into the clichés of the genre and retains originality and interest.

Two young American women vacation in the Old City of Jerusalem and find themselves at the heart of an attack by living dead creatures. This movie plays perfectly into our sensory experience of vision. JeruZalerm wisely uses all the stories, myths, and mystical legends about Jerusalem. It shows its past, its sanctity, and the famous syndrome that many of its believer’s experience. The entire film is seen through the digital glasses of Sarah (Daniel Jadlin), which have a variety of apps that flood the screen with visual information.

The directors created an atmosphere that on the one hand invites adventure and on the other has something charged and threatening.

Another movie like Bird Box. Cargo began as a short film at the Tropfest Australia Film Festival, which is the most respected short film festival in the world. The short 7 minutes created a huge buzz, garnering over 14 million views in its YouTube version. Netflix decided to take the idea of the short film and turn it into a full-length film, over 100 minutes long.

The movie follows a father named Andy, who tries to survive with his wife and toddler daughter Rosie the apocalyptic plague in the Australian outback bail. Andy’s wife is infected with the plague and infects him as well, and now he has 48 hours to find a way to save Rosie before he loses his sanity and becomes another man-eating monster of many.

Cargo is not a perfect movie, and it sits on a particularly recycled genre that will probably make a lot of people skip it. But despite this, it manages to tell a very personal and very moving story, while finding an almost original point of view in the world of zombies, plagues, and The Walking Dead.

The British movie is not one of the greatest horror films of recent times, but it certainly stands out in its qualities. It’s a great option for a movie like Bird Box. Bruckner’s direction is solid, even if he walks in pretty familiar works. The photography, music, and art design are quite impressive. The acting performance is also successful, with Rife Spool (“The Money Machine”) leading a limited but worthy cast.

The Ritual tells the story of four friends: Dom, Phil, Hatch, and Luke, who set out on a camping trip in northern Sweden. They gather to honor the memory of their good friend Rob, who was murdered about six months earlier. After Doom stumbles and twists his leg during their journey, the group decides to pass through the forest in front of them. They soon find themselves in a severe storm. That causes them to take refuge in an abandoned house where they begin to experience supernatural phenomena. It is not clear if there is a way out of the danger into which they have fallen.