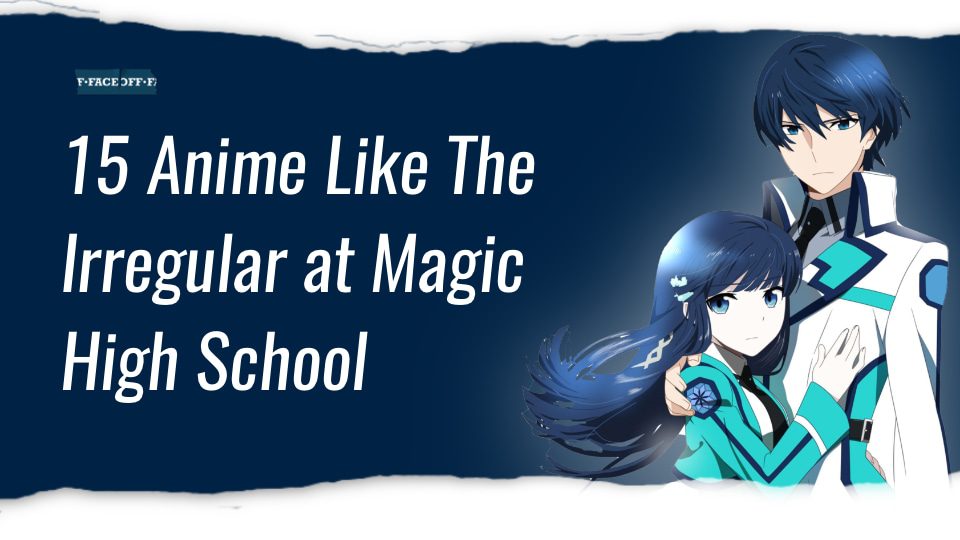 The Irregular at Magic High School is set in a futuristic world where magic is a technological product, and those who practice it become “magic technicians”. The protagonist, Tatsuya Shiba, is accepted to a prestigious academy that teaches the use of magic and the technology that accompanies it. Those who achieved high-grade entrance exams are admitted to the prestigious faculty in which its students are called “Bloom”, while those who received a low grade are admitted to the less prestigious studies and are called “Weed”. Tatsuya gets a low score so he is now Weed, while his sister, Miyuki is Bloom.

It’s a fun anime with an insanely strong male lead, great fights, and an unusual sibling relationship. If you like that sort of stuff, and you are looking for anime like The Irregular at Magic High School, then we’re here to help with a top list of the best similar animes.

1. Aesthetica of a Rogue Hero

The story takes place in a world where a certain phenomenon known as the “Samon Syndrome,” has been used to mass-produce the Isekai experience.

Young people use this to travel to fantasy worlds, and some often return. The protagonist named Akatsuki Ousawa is one such man. He defeated the demon lord and did everything he could in that world until finally, he got bored. So he abducts the daughter of the demon lord and returns back to Earth.

By making her pose as his sister, the two attend a special school that is designed specifically for those who return back to Earth. As for how this is an anime like The Irregular At Magic High School? Well, they attend a special magic school like siblings and that’s also the same base premise.

2. Code Geass: Lelouch of the Rebellion

What makes Code Geass an anime like Irregular at Magic High School is not any major similarities in the premise. Rather, it’s the extraordinary protagonist.

Both feature a main character who is more or less a mutant prodigy compared to Ordinary folks.

Lelouch is a young man, who by chance or fate, attains “Geass,” the power of a king, and then uses it to land a full-scale rebellion on the Holy Brittanian Empire.

And the way he executes his plans is insane.

Chrome Shelled Regios is a story that takes place in a post-apocalyptic world where humans have been forced to live in remote cities all because of giant mutants.

There is a man named Layfon who has had quite a past, and when the student council president at his academy realizes who he really is, she can’t help but try to recruit him considering how she herself is the captain of the 17th Military Arts Platoon.

However, with a past that he can’t bring himself to speak of, will Layfon really join? Or even if he does. How will things go from there on out?

You will notice similarities in how he is underestimated by others only to prove himself as the greatest badass shortly after.

On the surface, the only similarity that may make Fairy Tail an anime like Irregular at Magic High School is the element of magic.

Fairy Tail is about friendship, and while it may not try to be extraordinary or something brilliant, it manages to remain a heartwarming experience nonetheless. As for the premise, there are guilds scattered all across the Kingdom of Fiore.

This series is one of them and our main characters happen to be members of this guild. The members might be quirky, but in their hearts, they share a bond that is stronger than family and a level of trust that never yields.

“A Certain Magical Index,” also features a contrast between magic and science. The latter features more of a fusion though.

The story takes place in a technologically advanced world where many young students have been developing psychic abilities left and right, but the emergence of Touma Kamijou surprises scientists and researchers. His score in terms of psychic abilities is close to zero, but this young man possesses an ability called, “Imagine Breaker,” which allows him to cancel out the effects of other psychic abilities.

This, in a way, is also similar to the protagonist of Irregular at Magic High School, Tatsuya. Both have a unique way of doing things.

6. The Fruit of Grisaia (Grisaia no Kajitsu)

The protagonist named Yuuji goes to a certain academy in hopes of living a normal life, but the academy is the polar opposite. Not to mention, there are only five other students beside him.

There are striking similarities between both animes, it’s quite high up there in the list. Would’ve taken the top spot if it weren’t for the anime up next.

Both feature a badass protagonist, and sexy girls that ultimately gravitate toward the protagonist, they each have a sister, and yet the similarities go even further beyond.

7. Chivalry of a Failed Knight

In terms of being an anime like Irregular At Magic High School, this ecchi harem takes the cake.

Everything from the way the protagonist is treated by others, the prospect of a sister who has a weird obsession with her brother, and even the way one’s skills are gauged, it’s all similar.

Needless to say, Chivalry of a Failed Knight can be considered the same as “The Irregular at Magic High School,” but in an alternate timeline.

The former does have plenty of fanservice though, and unlike the Irregular at magic high school, it doesn’t try to be intelligent either. So, there’s that.

8. Classroom of the Elite

Classroom of the Elite is a story that takes place in a school that is a supposed Utopia for the elite. However, the students are divided into four classes where those in Class A are the most capable, while Class D has leftovers.

The protagonist named Ayanakouji is in Class D. But what most students have yet to realize is that he is a mutant prodigy, he is the only one who is in Class D, by choice.

I’m sure, you can already see the similarities between Ayanakouji and Tatsuya. It is indeed an anime similar to irregular at magic high school, and it’s not just the main characters either. The unconventional nature of the schools also plays a part.

Full Metal Panic! Is a hilarious comedy anime classic that never stops racking in fans of the genre.

There is an organization that’s trying to rid the world of all sorts of terrorism, and they have specialized technology which hints that they are indeed serious about this. And the most integral component of this organization is individuals called, “Whispered.”

They use their knowledge and understanding to create powerful machinery that helps aid the pursuit of their goal.

The protagonist named Sousuke is tasked with protecting a Whispered in training, and so he starts attending her school without revealing his true identity and begins to protect the person in question.

She must not fall into enemy hands no matter what.

Now, of course, since this is an anime like the irregular at magic high school, you can expect tons of military operations, and then there is also an underestimated yet formidable main character.

10. Magi: The Labyrinth of Magic

The protagonist named Aladdin is a young magician who sort of wants to wander around and explore the world in trying to discover his true self. Together with him is a friend and a mentor, and then there are the friends you make along the way.

I’d say if you want to experience an epic journey across a fantasy world. This is a done deal!

You’ll find the same prospect of Magic and its significance.

In both anime, there is the magic academy, borderline harem themes, an extraordinary protagonist, and somewhat complicated fights.

The ones who counter these dangers are special soldiers called Inquisitors, and an Anti-Magic Academy is a special place that is built for the sole purpose of training such individuals.

However, the platoon of the main characters is sort of mocked and underestimated because of their low ranking and not-so-competent members.

This anime picks the abstract idea of creating miracles and turns it into a tangible skill. There are individuals called Minimum Holders who are able to perform miracles within boundaries.

A certain detective agency named Hamatora is composed of a duo of Minimum Holders as their primary members.

And then out of nowhere, the agency starts receiving weird requests that all have a weird connection to a certain serial killer. Their police officer friend is also searching for him.

Not to mention, the killer targets Minimum Holders. So, it’s only befitting that the agency tackles this case.

Furthermore, the way they use supernatural abilities makes this an anime like the irregular at magic high school.

What makes this one an anime similar to the Irregular at Magic high school is also the protagonist. Just like Tatsuya, he is intelligent and well respected by those who understand what he is capable of.

The way the training goes is also somewhat similar. Though in this case, it’s about spiritual power, while in the Irregular at magic high school it’s about the technicalities.

As for the story itself, it’s about a certain boy named Ouriko who begins his journey to begin a powerful mage. And so, he heads to the examination site at the age of 12 to take the test and get closer to his goal.

It is harder than it sounds though.

14. The Rising of the Shield Hero

The Rising of the Shield Hero is about four individuals who were summoned to a fantasy world to become its four cardinal heroes. Each would be given a weapon: A Bow, A Spear, A Sword, or a Shield.

However, 20-year-old Naofumi is irrationally discriminated against for being the Shield Hero, until finally, he is downright betrayed, gets consumed by anger, and goes rogue.

Though little by little, he gains comrades who trust in him and strength that gives him an edge over the others.

Just like Tatsuya who finds his own way to fight, Naofumi starts becoming acquainted with the shield and discovers his own strength.

The protagonist named Tsubasa Kurata used to be an Otaku back in modern-day Japan until he got caught up in a car accident and died.

He is then reborn as a noble in a medieval fantasy world where people use powerful mechas called Silhouette Knights in order to fight against menacing demonic beasts.

The man now has status as well as the aptitude of a genius when it comes to magical abilities. So he enrolls in an academy that teaches students how to pilot the Silhouette Knights. This is where he comes across two twins and shares his true dream with them.

His actual goal is to one day create his very own Silhouette Knight. This catches the twins off guard because no one has done so in centuries.

So there you have it, folks. These were 15 anime like the Irregular at Magic high school.