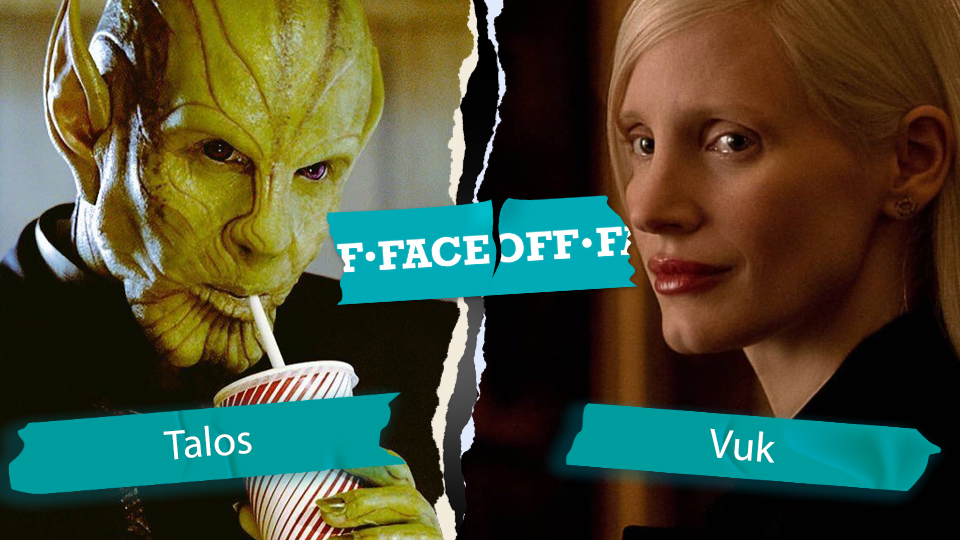 What would you do if you could change your looks at will? These powerful superhero shapeshifters are each blessed with the ability to impersonate someone else, but what they do with that ability is another story altogether. From assassins to aliens, in this battle poll, we face off the coolest shapeshifters in Sci-Fi and Fantasy.

You’re putting together an elite squad of soldiers to infiltrate your enemy’s HQ. Whose team of shapeshifters would you recruit, Vuk (X-Men: Dark Phoenix, movie) or Talos (Captain Marvel, movie)?

Mystique vs The Adonis

You need to squash this rebellion and that means taking out the leader, but he’ll be under heavy protection. Which shapeshifter would you hire to assassinate him, Mystique (X-men) or The Adonis (The Witcher, TV series)?

The McDonald heiress has just been kidnapped and you just know that anyone who saves her will get free nuggets for life! Who would you take on your rescue mission? Zam Wesell (Star Wars: Episode II – Attack of the Clones) or Bubble (Valerian and the city of a thousand planets)?

Both of the below have become enraged at humankind and will stop at nothing to see it destroyed. Who is more dangerous to the world, Charlie (Legends of Tomorrow) or Aknot (The Fifth Element)?

You gain the ability to shapeshift! But different shapeshifter’s abilities differ greatly from one another. Whose shapeshifting abilities would you prefer to adopt, Loki (Thor) or T-1000 (Terminator)?