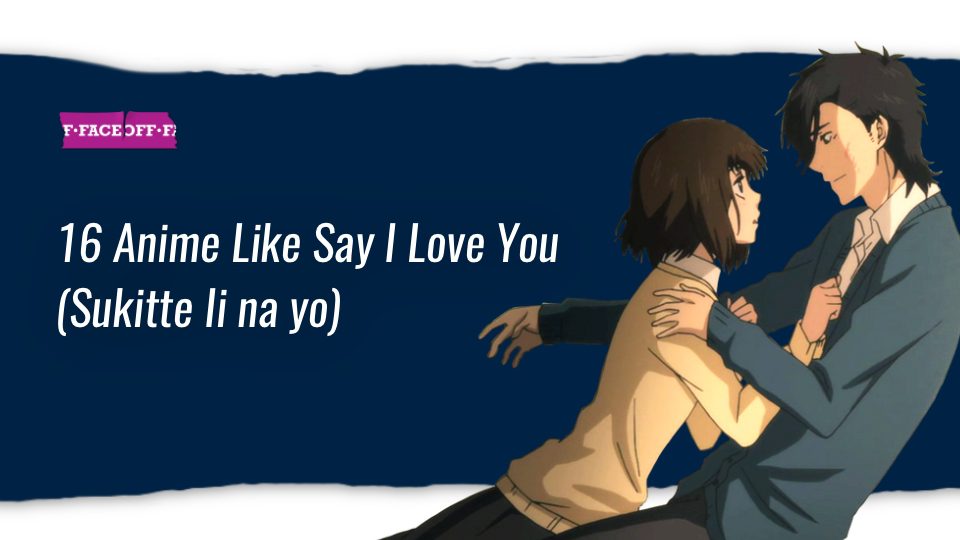 If you’re an anime fan and haven’t heard of “Say I Love You” (Sukitte Ii na yo), then you’ve been missing out! This romantic comedy series is about two high school students, Mei and Yamato, who fall in love after a series of misunderstandings. The show has been praised for its realistic portrayal of teenage relationships and its relatable characters. For those looking to get a similar experience from other anime, here are 16 shows like Say I Love You that you should check out.

The Josei anime follows the lives of a group of friends who are trying to cope with the death of their friend, Menma.

The story of Anohana: The Flower We Saw That Day is told through the perspective of Jinta Yadomi, also known as “Jintan”. Jinta is a teenage boy who stopped going to school and communicating with his friends after Menma’s death. One day, Menma appears to Jinta as a ghost and asks him to fulfill her final wish. Jinta then gathers his old friends together in order to try and grant Menma’s wish.

Throughout the series, the characters deal with their own personal issues while also trying to help Menma move on to the afterlife. The characters’ individual struggles contribute to the emotional weight of the series, making it an impactful and memorable show.

If you’re looking for an anime like Say I Love You that deals with heavy topics like grief and loss, then I would highly recommend checking out Anohana: The Flower We Saw That Day.

Kokoro Connect is a slice-of-life anime. The lives of five high school students and their friends experience the ups and downs of teenage life. The characters are all relatable and likable, making Kokoro Connect a great anime to watch if you’re looking for something lighthearted and slice-of-life.

The two anime series are similar in many ways, including their focus on teenage romance and friendships. If you’re looking for an anime that’s similar to Say I Love You in terms of story and characters, then Kokoro Connect is a perfect choice!

Tonari no Kaibutsu-Kun is a charming shoujo anime with excellent character development, a relatable story, and an endearing romance. The animation and artwork are both top-notch, making the show a joy to watch.

Tonari no Kaibutsu-kun share many similarities, including a heroine who’s not afraid to speak her mind, a handsome male lead who’s not quite sure how to deal with his feelings, and a touching story that will tug at your heartstrings.

The story centers around two protagonists, Hiro Hirono and Miyako Miyamura. Hiro is a high school student who enjoys playing the guitar in his band. One day, he meets a girl named Miyako who is searching for something she’s lost. As they search for her lost item together, they begin to develop feelings for each other.

Ef: A Tale of Memories is a touching story that will stay with you long after you finish watching it. It deals with complex emotions and relationships.

High school student Kotoko Aihara has been in love with Naoki Irie since she was a child. However, Naoki is a genius and popular with all the girls at school, so Kotoko has never had the courage to tell him how she feels.

One day, Kotoko’s house is destroyed by an earthquake and she is forced to move in with her father’s friend, Shigeo, and his son, Naoki. Now living under the same roof as her crush, Kotoko finally has her chance to confess her feelings to him. But will he feel the same way about her?

Itazura na Kiss is a classic shōjo romance that fans of Say I Love You are sure to enjoy. It features a strong female lead who isn’t afraid to go after what she wants. It has plenty of drama and romance.

Two high school students, Nanami Takahashi and Yano Motoharu become close friends and eventually fall in love with each other.

The anime follows the cute couple as they navigate through the ups and downs of young love, dealing with issues such as jealousy, insecurity, and communication problems. Bokura ga Ita is a heartwarming and realistic portrayal of teenage romance.

Kimi ni Todoke (2009) is a shoujo anime that follows Sawako Kuronuma, a cute girl who has been nicknamed “Sadako” after the girl from The Ring, as she starts to make friends in her new school. While it may not have the same romance as Say I Love You, it does have a similar charm.

Futaba Yoshioka is a tomboyish high school girl who has recently transferred schools. She meets Kou Tanaka, a boy she used to know from middle school, and the two begin to reconnect.

However, just as things seem to be going well, Futaba’s childhood friend Yui arrives on the scene, complicating things. Ao Haru Ride is a heartwarming story about first love, friendship, and growing up.

Hachiman Hikigaya is a cynical and anti-social high school student. Sound familiar? That’s because this anime has a lot of similarities to “Say I Love You”. Both are slice-of-life romance anime with comedy elements and revolve around the main character’s love life.

If you’re looking for an anime with a similar feel to “Say I Love You” (“Sukitte Ii na yo”), then you should check out “Ballroom e Youkoso (TV 2017)”. Both shows are about young love and feature characters who are unsure of themselves and their feelings. Both series also have a bit of drama, as the couples face obstacles in their relationships.

A high school student named Tatara Fujita has no interest in dancing until he’s dragged to a ballroom dance class by his friend Kyouko. There, he meets Shizuku Hanaoka, a talented dancer who opens his eyes to the beauty of the art form. As he begins to learn more about ballroom dancing, Tatara starts to fall in love with Shizuku. However, she’s dating another dancer named Sengoku, and Tatara must overcome his self-doubt if he wants to win her heart.

The story follows the life of high school student Momo Adachi, who is trying to deal with her feelings for her best friend, Toji Kazama, while also contending with the advances of popular male student Kairi Okami.

If you’re a fan of “Say I Love You”, then you’ll definitely enjoy watching “Peach Girl”! The two anime share a lot in common, including their focus on the everyday lives and relationships of high school students. Both shows are also light-hearted and comedic in nature, with plenty of heartwarming moments to balance out the drama.

The story of Hiyokoi revolves around Hiyori Nishiyama, a shy girl who has been hospitalized after an accident. She falls in love with her classmate, Kazuya Kujou, but is too afraid to tell him how she feels. Will Hiyori find the courage to confess her love to Kazuya?

Maid Sama is a shoujo anime that is just like To Say I Love You in several ways. Both series are about high school students learning to deal with their growing feelings for each other. Maid Sama is a bit more light-hearted than Say I Love You, but both series have their fair share of drama.

Futaba Yoshioka is a high school girl who falls in love with her classmate Toma Kikuchi. However, she soon learns that he is dating another girl and decides to move on.

Three years later, Futaba reunites with Toma and discovers that he has changed. She also realizes that she may have never really gotten over him. Ao Haru Ride is a heartwarming story of first love and second chances.

Nodame Cantabile is a Japanese rom-com drama that aired in 2001. It follows the story of Megumi Noda, or “Nodame”, a talented but eccentric student at Momogaoka College of Music. She meets Chiaki Shinichi, a highly-skilled and disciplined pianist, and the two quickly develop a rivalry. However, as they begin to work together more, they start to fall for each other.

The anime is based on the manga of the same name by Tomoko Ninomiya. It was adapted into an anime by J.C.Staff and directed by Kenichi Kasai. The music was composed by Ken Hasebe and Yuki Kajiura.

Nodame Cantabile is a heartwarming story of music, love, and friendship. If you’re looking for an anime like Say I Love You that will make you laugh and cry, then this is the one for you!

Both anime are slice-of-life romances that focus on the everyday lives of high school students. Amagami SS is set in the present day, while Say I Love You takes place in the early 2000s. Both series feature characters who are shy and have trouble expressing their feelings.

The biggest difference between the two anime is that “Amagami SS” is structured as a series of standalone arcs, each focusing on a different character. This allows the show to explore different aspects of romance, such as unrequited love and first love. “Say I Love You”, on the other hand, tells a more traditional linear story about two people falling in love.

If you’re looking for an anime that’s similar to “Say I Love You” in terms of its focus on teenage romance and slice-of-life storytelling, then you should definitely check out “Amagami SS”!