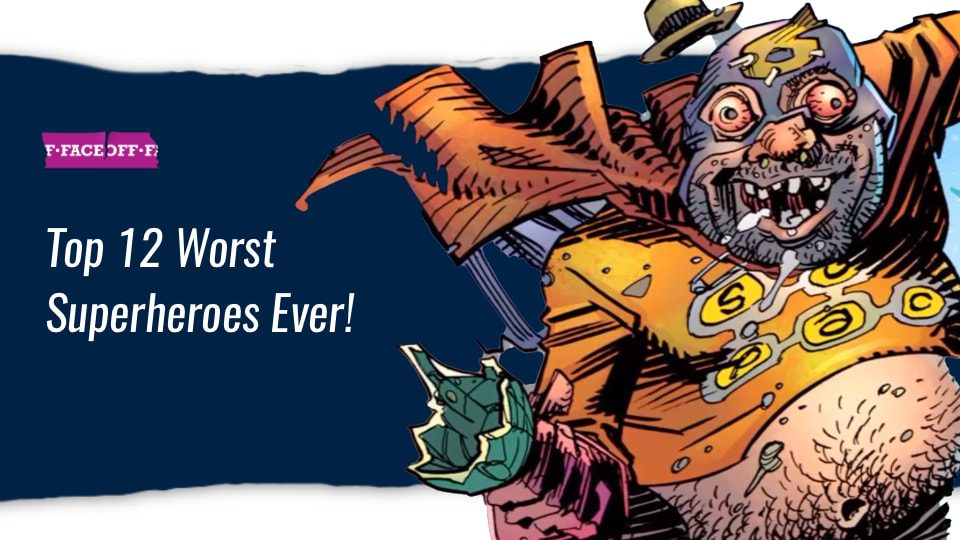 Superheroes have been around for a long time. They’re practically everywhere – our movie screens, TV shows, comic books, and even toy shelves. It’s no wonder why these characters have become such an integral part of our culture. But with so many superheroes out there, it’s inevitable that some of them would be better than others. This article will take a look at the twelve worst superheroes ever created. These are some of the least inspiring superheroes in comic book history, from embarrassing backstories to terrible powers!

Dazzler is the worst superhero for a number of reasons. First and foremost, she has terrible powers. Her ability to turn sound into the light is not only useless, but it also makes her incredibly easy to defeat. She has no offensive capabilities whatsoever, which means that she is constantly at a disadvantage against her enemies.

Secondly, Dazzler is an incredibly boring character. She has no interesting backstory or personality traits that make her stand out in any way. She is often portrayed as nothing more than a pretty face, and her lack of depth makes her one of the most uninteresting superheroes around.

Finally, Dazzler has very little in the way of supporting characters or storylines. She has never been able to carry her own comic book series, and her appearances in other comics are usually forgettable. In short, Dazzler is a terrible superhero who is plagued by boring powers and an uninteresting persona

Sixpack’s only known power is that he can open beer bottles with his abs. He was renowned for his mythic battles with supervillains, donning a DIY costume steeped in urine. He’s the head of Section Eight which is a team of superheroes that are all mentally unstable in some way. Sixpack took his crew on various missions but they ultimately proved ineffective. So not only is Sidney Speck’s power set unimpressive, but he’s also not exactly stable himself. It was assumed he had perished but he simply vanished into anonymity, attending AA meetings with no memory of being a superhero.

Captain Planet was a cartoon character who fought environmental crimes and preached the importance of living green. He was created in the early 1990s as a response to the growing awareness of environmental issues.

While Captain Planet had good intentions, he was often criticized for being heavy-handed in his message and for being too simplistic in his solutions to complex problems. He was also accused of being a “joke” character, and many people felt that he wasn’t taken seriously as a superhero.

His powers are terrible. He can control the elements, but his control is very weak and he often fails to use his powers effectively. Additionally, his costume is ridiculous and he doesn’t have any real fighting skills. He relies too much on his powers and not enough on his own abilities. Lastly, he is always preaching about environmentalism and saving the planet, but he never actually accomplishes anything significant. All in all, Captain Planet is a terrible superhero with terrible powers and no real purpose.

Despite all of these criticisms, Captain Planet remains an iconic figure in pop culture and is still remembered fondly by many people who grew up with him.

As one of the original members of the Justice League, Black Condor has had his fair share of adventures. However, in recent years his popularity has waned and he has been relegated to the ranks of C-list superheroes. His origin story is convoluted and confusing, and his powers are not particularly impressive.

There have been multiple versions of the Black Condor since his first appearance in WWII. His backstory is certainly peculiar, he survived an attack that killed his parents and was adopted by a condor – which, somehow, then gave him the ability to fly. He also has enhanced strength, but that’s about it. His lack of super speed or other cool abilities puts him at a serious disadvantage when compared to other heroes.

So why is Black Condor considered the worst superhero? It’s because his powers are lackluster, he’s boring, and he just doesn’t measure up to other heroes. No surprise then that he had to be rebooted twice!

See also: Mind Control Vs Super Speed: Which Is Better?

Cypher is a character from the Marvel Universe who possesses the power to understand any language, whether spoken or written. However, he is unable to speak or write himself. Cypher was created by Chris Claremont and Bill Sienkiewicz and first appeared in The New Mutants #13 (1984).

Cypher’s abilities make him a valuable asset to any team he is on, as he can act as a translator for his teammates. However, his inability to communicate directly makes him somewhat of a liability in combat situations. Additionally, Cypher often has difficulty understanding non-verbal communication, which can lead to misunderstandings with his teammates.

Overall, Cypher is a relatively low-powered superhero who is more useful as a supporting character than as a frontline fighter.

Though Carlton LaFroyge may have had good intentions when he donned a cape and mask to fight crime, his methods were far from heroic. LaFroyge was known for using excessive force when apprehending criminals, often causing serious injury or even death. This earned him the nickname “The Punisher” among both the police force and the criminal underworld. In addition to his brutal tactics, LaFroyge was also corrupt, accepting bribes from both sides of the law. His actions eventually caught up with him and he was arrested and sentenced to life in prison.

He can turn invisible, but only for a few seconds at a time. Secondly, he’s really not that strong or fast, so he’s not much help in a fight. Thirdly, he has a terrible sense of direction and is always getting lost. Lastly, he’s just generally quite clumsy and unlucky, which makes him more of a liability than anything else.

Jubilee from X-Men is one of the worst superheroes ever! She is a complete ripoff of Marvel’s flagship character, Wolverine. She has all of his powers, including his regenerative healing factor, and none of his personality.

She is also constantly getting in trouble and needs to be rescued by her teammates. Jubilee is a useless character who adds nothing to the X-Men team. She can create sparks and fireballs, which are about as useful as a light show in a dark room. Worse still, her powers are completely unpredictable and often fail when she needs them most.

Jubilee is also one of the most annoying and immature characters in the X-Men universe. She’s constantly cracking jokes, even in the middle of battle, and she has an irritatingly high-pitched voice. She’s also incredibly reckless, often putting her teammates in danger with her impulsive actions.

All in all, Jubilee from X-Men is far from being the best superhero around. Her lackluster powers and childish personality make her more of a liability than anything else.

There are plenty of weird and wacky superheroes out there, but Squirrel Girl might just take the cake as far as bizarre comic book characters go. First appearing in 1992, this mutant superhero with squirrel-like abilities has gone on to become a fan favorite in the Marvel Universe.

But let’s be honest, when you really think about it, Squirrel Girl is kind of a lame character. She doesn’t have any superpowers that are all that impressive, she dresses like a squirrel (seriously, who thought that was a good idea?), and her name is just plain goofy. Oh, and did we mention that she can talk to squirrels? Yeah, that’s not exactly the stuff of legends.

Still, there’s no denying that Squirrel Girl has carved out a place for herself in the world of superheroes. Love her or hate her, you’ve got to give her credit for being one of the unique characters.

Bailey Hoskins is the most useless mutant in X-men. His powers are that he can explode his body, but he doesn’t have any regenerative powers, and he can’t un-explode. Basically, he has no useful powers, besides the laser beams he shoots from his eyes. Bailey Hoskins is the mutant equivalent of a Saibaman from Dragon Ball Z. So you basically have the power to self-destruct. No wonder he was nicknamed the “Worst X-Man Ever”.

Pennypacker has the power to literally shoot pennies out of his wrists. – that’s it. No flying, no super strength, no laser vision…just pennies. And his origin story is pretty ridiculous too. His teammates included a guy who could use his stomach as a weapon (what is it about superheroes and stomachs?) and a Korean statistics genius.

Ulysses Solomon Archer is an American trucker. He has an experimental alloy that functions like a natural skull but has the added bonus of being much sturdier. Not only this, he can pick up CB radio waves as well as enemy frequencies – however, there’s no way to turn it off. It turned out that all these events were part of a plan devised by aliens looking for someone to establish interstellar trade markets and they saw human truckers as the perfect ones! U.S.’s truck was then fitted with the necessary tech for space travel and he now works as a space hauler. It doesn’t get any worst.

Rainbow Raider’s powers are among the weakest and most useless, and he has very little motivation or personality. In fact, Rainbow Raider is so bad that he was recently voted the worst superhero of all time.

So why is Rainbow Raider so terrible? Let’s start with his powers. Rainbow Raider can control any and all colors of light, but he can only do so within a very limited area. That means that he can’t shoot powerful beams of energy or fly or do anything else that would be remotely useful in a fight. In fact, his power is so weak that he often has trouble defeating even the most basic villains.

But even if his powers were stronger, Rainbow Raider would still be a terrible superhero. He has no real motivation or personality and is often more concerned with petty crimes than saving lives. He’s also been known to team up with some of the worst villains in the DC universe, which doesn’t exactly endear him to fans.

So there you have it: Rainbow Raider is easily one of the worst superheroes in comic book history. His powers are weak, his personality is nonexistent, and he frequently teams up with villains.