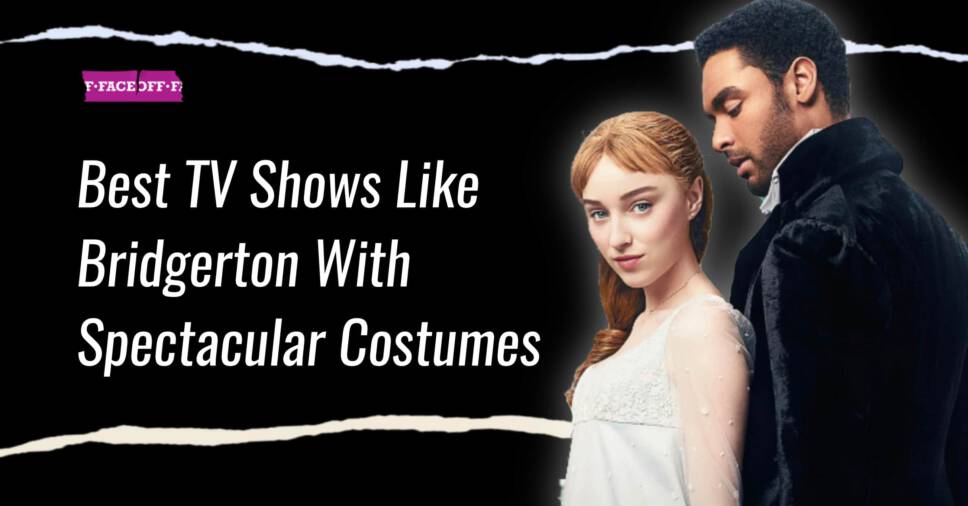 Based on the books by Julia Quinn, Bridgerton is the hit series from Netflix that swept up their feet, millions of viewers around the world. It is fun, steamy, and romantic at the same time. Absolute bliss for binge-watching. If you enjoy shows with similar vibes you might enjoy our list of the best tv shows like Bridgerton.

The tv show follows Daphne Bridgerton, the eldest daughter of the powerful Bridgerton British family as she makes her debut in London’s competitive marriage market, Things get complicated when she meets the Duke of hastings – an eternal bachelor.

We have suggestions for other shows that give the same feel as Bridgerton. These period drama series have historical settings, spectacular costumes, romance, great plots, and fierce royal female protagonists.

This series chronicles the life of Mary, Queen of Scots, and her rise to power in the French court during the late-sixteenth century.

The monarchy is something that has occupied many historians for many years – from Queen Cleopatra, later Marie Antoinette, and even Queen Elizabeth and Mary Queen of Scots. The rivalry between the two powerful queens (Elizabeth and Mary), has captivated the audience.

After all such rivalry between cousins ​​is not something common. But, when it comes to royal rule, nothing is common.

If you are looking for tv shows like Bridgerton, this period drama will take you back to the 16th century, it is the ultimate escapism – with witty dialogues, romance, original costumes, spectacular jewelry, and styling.

England in the early sixteenth century was on the verge of disaster. If the king dies without a male heir, the kingdom may be torn to pieces in a civil war. Thus, Henry VIII wants to annul his marriage to Catherine of Aragon which lasted twenty years, and marries Anne Boleyn despite the pope’s opposition and the opposition of most of Europe’s rulers.

The attempt to gain the king the desired freedom casts havoc on Cardinal Thomas Wolsey, the king’s senior adviser, and his downfall leaves political chaos.

Into this void comes Thomas Cromwell – the son of a violent blacksmith, who rose from the rubbish bins and became a lawyer, a thug full of magic, and an ingenious politician who hardened because of the severe loss he suffered in his personal life.

This medieval mini-series is an adaptation of Hilary Mantel’s novel. It is an outstanding historical series, with brilliant dialogues and visuals.

In an attempt to surpass the waves of success of the period drama genre, Sky and HBO coproduced Ekaterina, a four-episode mini-series reviewing the reign of Catherine the Great Empress of the Russian Empire that provoked many storms throughout her rule in the empire.

If you are searching for breathtaking costume shows like Bridgerton, beautiful locations, and magical landscapes, you’ll most likely enjoy binging Ekaterina. Helen Mirren, the Oscar-winning actress, Emmy, carries the series in another brilliant role.

Matthew and Marilla Cuthbert, are brother and sister living together as they are never married. They decide to adopt an orphan boy to help out around their ancestral farm, on the outskirts of a Canadian town.

When Matthew goes to pick the child up at the railway station, he finds a 13-year-old girl named – Anne Shirley. Anne was orphaned when her parents died when she was a few months old, and lived as a servant in various households, before being placed in an orphanage.

It takes time for Matthew and Marilla to accept the exceptional, imaginative, bright, high-spirited, and talkative girl.

Based on the classic series of novels by Lucy Maud Montgomery, the magnetic character of Anne Shirley will sweep you right away. It’s dramatic and emotional and with an extremely “girl power” approach and inspiration.

Ross Poldark (Aidan Turner) returns to England after fighting in the American Revolutionary war – his family and friends thought he was dead, and he finds that his long-time love is about to marry his cousin. He tries to rebuild his life with a new business venture, making new enemies and finding a new love where he least expects it.

Based on Winston Graham’s series of novels, Poldark, now in its fifth season, is a beautiful and thrilling period drama. Poldark is not as steamy, but more Jane Austen vibe, it shares similar vibes such as beautiful costumes, outstanding sets, and a charismatic cast.

The Netflix hit drama portrays the life of Queen Elizabeth II, from her wedding in 1947 to Duke of Edinburgh until our time.

Deep inside the ivory tower of the cold and alienated Buckingham Palace, Netflix’s The Crown has found a host of fantastic characters and stories of sad losses in the mirror of history.

With the exceptional performance of its actors and breathtaking photography, The Crown is the obvious suggestion for shows like Bridgerton. A rare British period series in its quality.

Walter Hartright (Ben Hardy), a young art teacher, meets and gives directions to a mysterious distressed woman, dressed in white – after one minute she vanishes. Later he is informed by a policeman that the woman has escaped from an asylum.

Walter then sees the woman in white again on the grounds of Limmeridge House, but she runs away before he can talk to her, later he also meets a woman with a suspicious resemblance to the woman in white, and falls in love with her.

Based on a novel by ​​Wilkie Collins, The Woman In White is a period thriller you can not stop watching, it’s mysterious and sweeping, smart and deceiving. With beautiful visuals and a charismatic cast.

This series is an adaption to William Shakspeare’s historic play, the Henriad Tetralogy. The first season follows the events of Richard the Second and Henry the fourth.

The fascinating three-part series covers the period in Britain’s internal struggle known as the Wars of the Roses and shows one of Shakespeare’s most notorious anti-heroes who developed under the guise of Richard III.

The Amazon Prime production by the creators of Downton Abbey is about the life of Queen Victoria.

The series begins on the day the 18-year-old Drina announces that her aunt is dead and is now the intended queen. The eight episodes drama follows Queen Victoria’s life, from her youth until she became a strong leader when she headed the superpower of the period.

But in Victoria, dedicates a special emphasis to both the Queen’s love life, courtship, and marriage and also to the family she established with Prince Albert.

This awards winner period drama series takes us back in history, with brilliant costumes and set. It is a series for royal family lovers but also for romantic drama fans.

Yet another series about Cathrine the Great.

While you were obsessing over Bridgerton, another fine period series has passed under your radar. The Great portrays the royal Catherine’s early life and marriage during the 18th century in Russia.

The young Cathrine (Played divinely by Elle Fanning), is uprooted from her country and sent to marry Peter, the Russian emperor (the great Nicholas Holt), and become an empress.

At first, she is excited about the marriage and her new life in general – but the seemingly dreamy life turns out to be a nightmare as her dreams crack one after another.

First, she realizes she’ll never get the sweet love story because Peter is not very smart (to say the least) and horribly childish. Later, she internalizes that he is not only these two things but also a horrible and terrible ruler, a toxic man par excellence who uses violence by default. A”cute” but dangerous douchebag who mans the most senior position in the country.

It may sound boring, but The Great is a show like Bridgerton. It’s anything but polite: it’s a brilliant and wild dark comedy, and if decapitated heads do not deter you, you will discover one of the best series of the period.

In 1945 Claire Randall is a married military nurse who one day is mysteriously transported back in time to 1743, where she is forced to marry the knotted warrior when her heart still belongs to her husband.

Outlander looks like a cruel and heavy-headed historical series – but in fact, it is a juicy novel about a woman from the future and a man from the past, one that is fun to dive into and fall in love with. A Romance wrapped with action!

Claire Randall is the woman you wish to be and for moments a persecuted character who only gets more and more entangled in a tough world that does not welcome women. And all this comes in an attractive and slightly misleading historical setting.

Jonathan Reese Myers plays Henry VIII in an unprecedented way. With a passion for power and an appetite for love, Henry’s relationship with Anne Boleyn and his obsession with bringing in a male heir changed the institution of marriage and the world forever.

Against the background of authentic and impressive scenery, the series describes well Henry VIII’s narcissistic and slick personality. For its strengths and weaknesses especially towards women and its direct impact on state governance at home and abroad.

There are many reasons why Bridgerton became so popular, but one of them is that it is modern enough for people who don’t watch period dramas and it is packed with style to satisfy fans of more traditional costume/period dramas. The Tudors has all that plus the sexiness factor.

See relevant: The Top 12 Best Shows like The Tudors