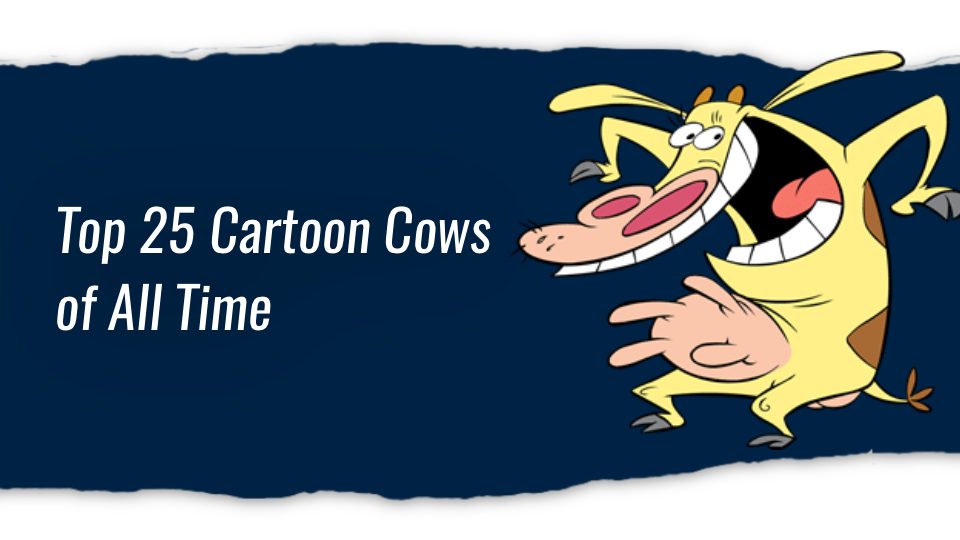 Holy cow! I never realized that were so many cartoon cows. Having worked on this list I noticed there’s something about cartoon cows that just make us smile. Maybe it’s because they are large and clumsy-looking so anything that casts them as dumb works and anything that casts them as dangerous or intensely clever seems edgily funny. Whatever the reason, we can’t seem to help but feel joyful when we see them. So next time you’re feeling down, why not take a look at some pictures of cartoon cows? I guarantee they’ll put a smile on your face! One rule: only female cows are allowed on this list, no bulls, oxen, or steers. Yeah, this means you, Otis. I don’t care that you got udders!

1. Abby from Back at the Barnyard

Abby is one of the main characters in the Nickelodeon show Back at the Barnyard. She is a cow who is best friends with Otis, the main character, and his love interest. Abby is very smart and often comes up with great ideas to help solve problems. She also has a great sense of humor and is always making jokes.

A Disney cartoon cow, Clarabelle Cow first appeared in the 1928 cartoon short “The Gallopin’ Gaucho”. Clarabelle is a white dairy cow who serves as one of Minnie Mouse’s best friends. Although not as popular as some of the other Disney characters, Clarabelle has remained a staple in the Mickey Mouse universe and has been entertaining fans for over 90 years. Clarabelle is generally portrayed as a friendly, good-natured cow who is always willing to help out her friends. She has a close relationship with Minnie Mouse and is often seen giving her advice or helping her with whatever problem she may be facing. Clarabelle is also known for her love of gossip and can often be found sharing the latest news with anyone who is ready to listen.

3. Cow from Cow and Chicken

One of the two leading protagonists of Cow and Chicken, Cow is actually Chicken’s biological young sister! Though usually perceived by Chicken as infantile and stupid, Cow sometimes exhibits strange talents. Also. Despite her willingness to use any method necessary, including blackmail, to get Chicken to do what she wants, Cow has a heart of pure gold. In fact, it has been proven that she has always been there to get her headstrong brother out of whatever trouble he got himself into. In some cases, she will resort to her Supercow alter ego to achieve that!

4. Maggie from Home on the Range Film

Another Disney cartoon cow, Maggie was once a prize show cow who had won several prizes. However, she was eventually sold to a small dairy farm called Little Patch of Heaven and became a farm cow. Maggie is always getting into trouble and always trying to escape from the farm and go off on adventures. She is voiced by Roseanne Barr and is one of the main characters in the film.

A very famous Disney cartoon cow, Cow is Jack’s family cow. Jack trades Cow for the Magic Beans. Once a year, she and a randomly chosen participant get to ride her when she jumps over the moon. It is well-known that she really dislikes rats and mice and will charge them if spotted.

First appearing in The Tick vs. Arthur’s Bank Account episode, Man-Eating Cow is a cow who, apparently, eats men. She is also part of a team of supervillains led by The Terror.  However, when Arthur finally confronts her, she turns out to be friendly and licks his face. She is voiced by Townsend Coleman.

Lily Bovine was one of the main characters in the early 1990s cartoon Wild West C.O.W.- Boys of Moo Mesa. She owns the Tumbleweed in Moo Mesa’s Cowtown, a bar where the C.O.W. Boys often go to relax. At one point, she almost lost her bar when her arch-rival, Sadie Wowcow claimed the oil well underneath her establishment. He actually almost drove Lily out of business had the C.O.W Boys not intervened.

In the “FarmerBob”.episode, we get to see Ol’ Bessy, a cow-like creature who looks like a jellyfish, but her upper body is white with black spots and she has an utter. Her utter are filled with some kind of jelly that, when pulled, will spurt in a casual direction. Ol’ Bessy is a cow on Old Man Jenkins’ farm, where SpongeBob and Patrick come to work.

Ella Cowbelle is a character in the Disney Junior cartoon Sheriff Callie’s Wild West. She is a cow who owns the local milk saloon and is known for serving frosty glasses of milk. Ella is famous for inventing all sorts of milkshakes and for being a bit of a gossip.

Annabelle is a dairy cow who starred in the 1997 film Annabelle’s Wish. The film tells the story of a young calf who is born on Christmas Eve and granted the gift of speech by Santa Claus. Annabelle uses her new voice to advocate for better treatment of animals on the farm where she lives. She also befriends a young boy named Billy, who helps her spread her message of kindness. Annabelle’s Wish is a heartwarming tale that teaches children the importance of compassion for all creatures.

Molly Moo-Cow is a cartoon cow who was created by animation pioneer Max Fleischer. She first appeared in Rainbow Parade, a series of shorts that were produced by Fleischer Studios. Molly Moo-Cow was voiced by Margie Hines, who also voiced Betty Boop. Molly Moo-Cow is a very friendly and good-natured character. She is always ready to lend a hand (or hoof). Molly is also known for her love of music, and she often sings while she works. While Molly Moo-Cow is not as well-known as some other cartoon characters, she remains a beloved figure among animation fans. Her simple design and cheerful personality have made her a timeless classic.

I realize Hellcow isn’t exactly a cartoon cow, but she is definitely an animated cow, so I decided to include her. Hell cow is a playable character in the game and has a very cool design. You have to win a race to unlock her and she comes with two big wings that enable her flight. She kind of looks like a vampire cow.

14. Abigail the Cow from The Fox and the Hound Animated Film

Owned by Widow Tweed, Abigail the cow is one of the most memorable characters from The Fox and the Hound. She is a big, friendly cow who is always happy to help out her friends. She is also very entertaining, telling jokes and making everyone laugh.

See also: 40 Most Famous Cartoon Foxes of All Time

This cute pink creature is Miltank! She is a Normal-type Pokémon and is known as the Milk Cow Pokémon. Miltank is a large, bipedal Pokémon with a small black head two pointed ears, and two large, blue eyes. There is a pink udder on its underbelly, and it has four short legs with black hooves. Miltank produces copious amounts of milk every day which she stores in her udder. The milk is very nutritious and helps heal any wounds or illnesses. In fact, many trainers give their Pokémon Miltank’s milk to help them recover from battle fatigue. Miltank is very gentle by nature and will often let children ride on its back for fun.

A tightrope walking cow, Dorothy is one of “Larry’s Amazing Animals”, and the only female performer in the carnival. She has a fear of heights when balancing on a tightrope, but she eventually manages to overcome it. Dorothy becomes good friends with Clifford when he joins the carnival.

First appearing in Season: 4 Episode: 13, getting excited over being milked, S&M cow became a recurring character of the show. In another episode, where Peter is taken out to brand her, she gets really happy to get branded. In fact, stops Peter in the middle of the branding to put on a Ball Gag, then has Peter continue. “OOOOOOOOoooooooooh!!!” Now, that’s one insane cow!

18. Belle from the Animal Crossing

Well, Belle may not be exactly a cartoon cow, but she is certainly an animated cow. Belle is a Cow Villager with a peppy personality, which means she is a female character who is ceaselessly friendly and excitable. She is probably called Belle because cows often wear bells around their necks.

I admit it is a weird addition to this list, but Crazy Cow is a very famous cartoon cow. The Crazy Cow character promoted the breakfast cereal produced by General Mills during the 70s. She used to say things like: “kids of America, your best friend’s a cow. Crazy Cow!”

20. Mrs. Calloway from Home on the Range

Clovis may have a small part in the series, but she made a big impression. In the episode “Darkly Dawns the Duck”Clovis was Taurus Bulba’s secretary and sometimes his private pilot. While his other henchmen were quite dumb, Clovis is very intelligent. She managed to escape a crashing airship by jumping out and parachuting to safety, as you can see in the picture.

In “The Magnificent Steven” episode, Rosie is bought by Stan to make Steve and his friends into men. Stan doesn’t know that Rosie had been contaminated with “mad cow” disease. Of course, the boys aren’t willing to eat Rosie, so only Stan eats her and loses his mind.

First seen in the Pilot episode, L.A. Cow waitress works at Silver Spoon Diner, a recurring location throughout the BoJack Horseman show. In this episode, BoJack meets with Pinky Penguin at the diner to discuss the state of his book. The L.A. Cow waitress, who is an elderly cow woman, hands BoJack his sandwich and tells him the chef made it just for him. However. inside the sandwich is a note that reads “DROP DEAD”.

Moo-Moo is one of the most popular characters on Doc McStuffins, and it’s easy to see why! This lovable cow is always up for a good time, whether she’s playing games with her friends or singing along to her favorite songs. Moo-Moo is also always there to lend a helping hand, whether it’s giving hugs to those who need them or lending a listening ear. It’s no wonder that this fun-loving cow is such a hit with kids of all ages!

In the A Mile In My Shoe episode, Timmy accidently runs into the Cow Fairy. This happens when Timmy tries to get to Fairy World to become a better Fairy Godparent but accidentally arrives in the wrong world twice, due to his greenness with magic. During his trip, a Fairy Cow with wings, a crown, and a wand, also end up in the same world, looking for Dairy World.