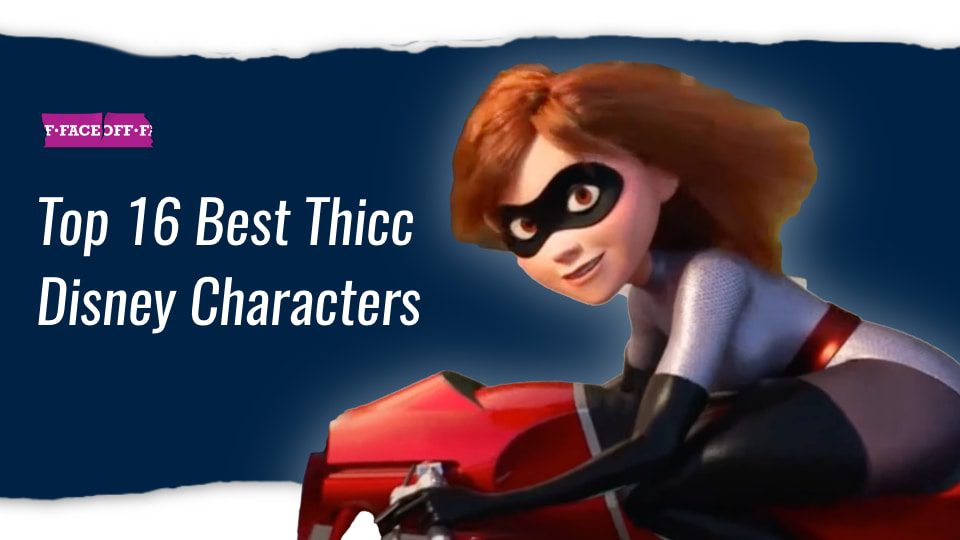 I guess that Thicc Disney Characters aren’t the first to pop into your mind when you think of “body positive”. Thicc, if you aren’t yet familiar with it, refers to those with a full-figured body, specifically with a thick waist and a big butt. After all, throughout the years, Disney characters accustomed us to pretty princesses with slim figures. However, surprisingly, there are actually quite a few thick Disney characters that are also very hot. In recent years we’re starting to see a shift away from the classic Disney look to a wider range of body types. So, in this list, I count down the top 16 best thicc Disney characters that exist in your favorite Disney movies.

I guess almost every potato is a thicc character. And these Disney love birds are no different. Mr. Potato Head was a cynic in the first movie, but in the sequel, when we first meet Mrs. Potato Head, we realize the love those two have for each other and it is just so charming.

The physical embodiment of hope, The Fairy Godmother is also a good example of body positive thicc Disney character. Yes, she is a chubby older woman, but she is portrayed as a heroine!  She arrived to help Cinderella in her most desperate hour and help return her faith in dreams.

3. Queen of Hearts from Alice in Wonderland

As Alice puts it, the Queen of Hearts is a “pompous, bad-tempered old tyrant“. And indeed, the original animated version of Alice in Wonderland depicted the queen as an evil monarch with a lot of curves. Her presence is even more striking because of her small crown and how tiny her husband is made to look in comparison to her.

4. LeFou from Beauty and the Beast

He may not eat eats five dozen eggs every morning like his master Gaston but LeFou must be eating quite a lot too judging by his thicc body. Although LeFou is sometimes portrayed as something of a sad sack, he is much smarter than everyone thinks and is the brains behind some of Gaston’s successes.

The three good fairies actually represent different three body types, with Flora having a rounded figure, Fauna having graceful features with curvaceous hips, and Merryweather was a petite yet plus-size fairy. It is nice to see a range of beautiful female bodies in a movie that is already over 60 years old.

The largest of Pongo and Perdita’s puppies, Rolly has a never-ending appetite indeed. Even after just eating, Rolly can be seen asking for more food.  In my book, cartoon dogs qualify as thicc Disney characters! Actually, he was named Rolly for his “rolly-polly” physique. Rolly cares deeply for his family, but after his family food is his second true love.  We even see him put his life on the line for a good meal every now and then.

For some reason, Phil, who is a trainer for heroes and has a great love for bodybuilding and gymnastics, is depicted as a round, almost obese, thick character. The fact that he was voiced by Danny DeVito, who shares some of his physical traits, is just fantastic.

When Stitch’s ship crash-lands, Lilo, who is an orphan, gets a new, unconventional family of alien visitors. I love that Lilo is designed as a real kid. Just like grown-ups, not all little girls look the same and that is fantastic.

9. The Cheshire Cat From Alice In Wonderland

I like The Cheshire Cat for being the only character in Wonderland who makes sense. Meaning, that unlike everybody else, he actually listens to what Alice is saying and answers her, teaching her the rules of how things work. What a blessing in a place where everybody is mad! He is a true thicc icon! For some reason, all of his strange behavior just go so well with his chubbiness.

Although not famous like some of the others on this list, this stout thicc fairy is important. Fairy Mary saw great potential in Tinker Bell and became Tink’s best friend and mentor. I love how she carries herself in an elegant manner and how she takes great pride in being a Tinker. Seeing her move just shatters the whole stereotype that being fat automatically makes you less athletic. Just look at her ice skate and you will know how graceful she is.

11. Mrs. Potts from Beauty And The Beast

Once a regular human, Mrs. Potts transformed into an enchanted teapot, when the prince insulted a powerful enchantress.  As the castle’s head housekeeper, Mrs. Potts acts as a guardian to Belle when she is held prisoner in the castle. It was rather cool that her portrayal as a teapot really matched the thicc lady we saw at the end of the movie.

Maui is a demigod, and he is larger than life. You just look at him and know right away that he is stronger than anybody else. In fact, he’s so big that some people think that the legendary demigod is more obese than the Olympian. I don’t know, but when I look at this guy my first thought isn’t “big”. He definitely has the thick look. He is hot stuff! and I for one, am glad that Disney designed him that way.

Luisa has a muscular build and superhuman strength to match. She is so powerful she is capable of moving gigantic objects like buildings and bridges with ease. She could even lift an entire church, as well as kick a leaning house back into place. I mean, I would love to see her thicc swapping blows with Maui. She is fearless and tireless and undoubtedly one of the most popular thick characters in all of Disney.

14. Ursula from The Little Mermaid

One of the — if not THE — best Disney villain characters with white hair, Ursula is indeed thicc. The Sea Witch is actually a girl icon and a role model for body positivity. Ursula used to live in the underwater palace but was later banished. In order to get back at King Triton, she gave Ariel a potion that gave her legs and enabled her to be among the humans. She also managed to trick Ariel into sacrificing her voice. The fact that Disney chose Melissa McCarthy – a plus-sized woman – to star as Ursula in the live-action remake is just delightful in my opinion.

Let’s be honest, Winnie the Pooh is chubby. He has a big appetite for honey and often over-eats. However, it seems that he is proud of his stomach and that’s great. Pooh is perfect just the way he is, even if the front door isn’t big enough to accommodate him.

16. Helen Parr from The Incredibles

Thicc Disney mom, Helen Parr is a hot cartoon babe! She is a crime fighter, an accomplished pilot, and a red superhero with rubber power. She can easily take on powerful villains. She does a good job at taking care of the kids, protecting them when necessary, a real super mom!

17. Roxanne from a Goofy Movie

Max’s sweet thicc girlfriend and Stacey’s BFF. She is a shy, kind student at Spoonerville High School with a soft and tender heart. Most of her maturity in appearance comes from her thicc hips and thick red eyebrows.