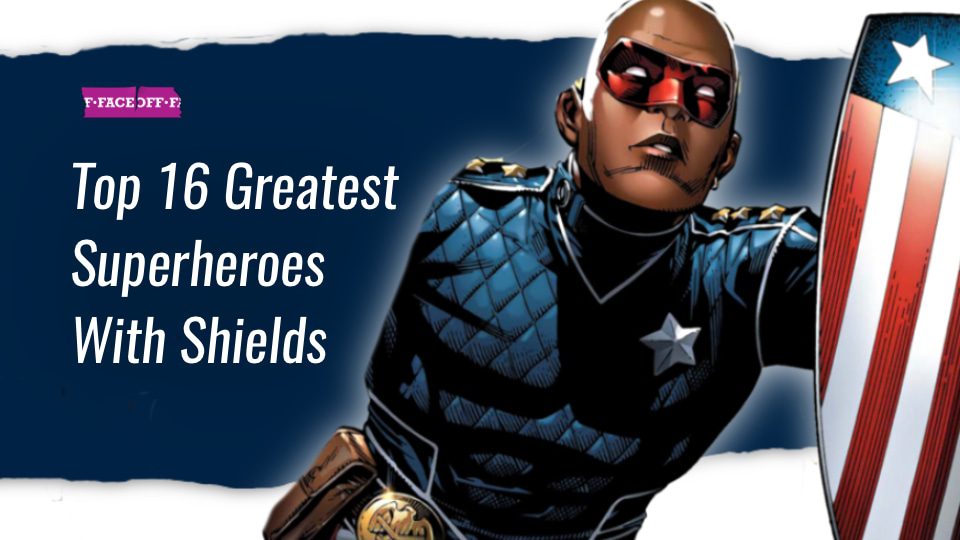 You may think that superheroes are so strong, so fast, and durable that they don’t need a shield. Well, there are at least 16 superheroes with shields who disagree with you! That’s right, a good shield can boost even a superhero’s attacks and defenses and gain him or her the advantage they need. After all, even a superhero wants to go home unharmed!

From Wonder Woman to Captain America, in this list, I count down the 16 best superheroes with shields.

16. Multi Man from The Super Globetrotters

Like the other members of the Super Globetrotters team, Multi Man is a superhero who can transform himself from his regular form by entering a magical portable locker.

Besides his ability to fly, Multi Man can clone himself to surround and mystify his enemies.

Like the other Globetrotters, he gained his powers through an element called Globetron and another exposure to it would weaken him.

Multi Man wielded a shield to protect himself from such supervillains as Museum Man, and Facelift.

15. Soldier Boy from The Boys

Unlike the Soldier Boy we saw on Amazon Prime, the comic book Soldier Boy wasn’t America’s greatest superhero before Homelander.

In the comics, Soldier Boy is not as strong or durable as supes like Homelander or Stormfront. However, he is strong and fast like you would expect a supersoldier to be, and an expert shield-user.

14. The Guardian from DC Comics

Another superhero with a shield, the Guardian is sometimes considered a copy of Marvel’s Captain America.

Like Captain America, the Guardian has no Superpowers and wields an indestructible shield. Also, he is an exceptional hand-to-hand combatant and very proficient in shield use.

Dane Whitman is a Black knight, a superhero with a shield bent on restoring his family’s honor that his uncle damaged by becoming a supervillain.

Although famous for wielding the Ebony Blade – a cursed sword that every time draws blood drives its user closer to madness – Whitman also carries a shield.

Throughout the years, Black Knight wielded a variety of shields. For a while, he had the Photon Shield, a hard-light energy shield, similar to the one used by Captain America. In the Heroes for Hire series, Black knight has the Shield of Night, a mystical shield that not only protects him from most forms of attacks but also absorbs the energy of the forces directed against it. He can then release that stored energy in the form of powerful blasts from his blade.

Jaime Reyes is a teenager who discovers that the Blue Beetle scarab transforms into a powerful battle suit, allowing him to fight crime.

The Blue Beetle scarab is a tool of war of the Reach, an ancient alien race who designed the suit to turn the wearer into the “ultimate infiltrator” who will take over his world for the Reach. However, the suit was damaged and so, instead of controlling the host, it formed a symbiotic bond with him.

The suit can reconfigure itself to produce a wide variety of armaments. A common function is becoming a sword and shield. Like, in Blue Beetle 2006, issue 3, he uses it to protect his friends from an agent shooting ray guns.

11. Link from The Legend of Zelda

In my opinion, Link qualifies as a superhero with a shield. I mean, he has several superpowers, including turning into a wolf, summoning lightning, controlling the wind even time travel. He was even a member of a superhero team called the Champions.

Link’s most iconic shield is the Hylian Shield, a traditional shield bore by the Knights of Hyrule. Though this shield is made of steel, it is light and sturdy. In all the Zelda games it bears the symbol of the Triforce above the red Hylian Crest.

In Zelda: Breath of the Wild, the shield is located in the basement of Hyrule Caste and protected by the monster STALNOX, so you’ll have to beat him to get the shield.

10. She-Ra from She-Ra and the Princesses of Power

You may didn’t know, but She-Ra’s Sword of Protection is able to take on a variety of different shapes of weapons. And one of them is She-Ra’s shield.

The shield is a piece of powerful tech created by The First Ones to protect The Princess of Power. Like the Sword of Protection, the shield has the Runestone, a turquoise-colored opal, embedded in it.

Eli Bradley is a descendant of a family in which a few of his ancestors took part in the Super Soldier program. However, Eli was born without any superpowers, so he compensates for it by using the Mutant Growth Hormone pills.

With the MGH formula, Eli possesses strength, speed, and reaction time superior to that of a regular super soldier or even Captain America, but at a heavy mental and physical cost. He carries a replica of Cap’s original shield, similar to the unpainted one carried by his grandfather.

8. Naofumi Iwatani from The Rising of the Shield

Probably the most famous anime character who uses a shield, Naofumi Iwatani proves just how powerful a Shield Hero can be.

His Legendary Shield is one of four Legendary Weapons and has the ability to shoot an energy blast, unleash a terrible shriek that causes the target to be frightened, or induce a brief moment of unconsciousness in the enemy.

The Legendary Shield can also instantly transform into another form, depending on what monster on human it is facing.

Red Guardian is depicted as an elite fighter, but not a master like his American counterpart. The two have actually exchanged blows in the past, and Cap had the upper hand. However, the Red Guardian is a superb athlete who was trained in many forms of combat by the KGB. His shield is his primary weapon and he uses it as a projectile weapon, aimed at his opponents.

Usually, the shield has a white star on a red background or a red star on a black background.

Optimus Prime is as tough as they get! Well, as leader of the Autobots, he has to be. He is strong enough to lift trucks, can withstand tremendous amounts of punishment, and is a master hand-to-hand combatant, as well as being extremely experienced in all sorts of combat operations.

The giant robot is also heavily weaponized with an Ion Blaster, Barrage Cannons, and a machine gun. However, even Optimus sometimes needs a shield to provide himself with the edge he needs to defeat the Decepticons.

For example, in Transformers: Age of Extinction movie, not only did Optimus wield the Sword of Judgment but also a shield he found in Lockdown’s “trophy case”, a separate ship that docked off of the main Knight ship.

Leader of the very first Guardians of the Galaxy team, Vance Astrovik made it his mission to keep the legacy of Captain America alive.

Hailing from the far future, where he founded the original Guardians of the Galaxy, he went on a mission to search for Captain America’s shield and found it.

Once he found it, he had a costume tailored that paid homage to Steve Rogers and adopted the name, Major Victory. In one of his adventures, when he traveled back in time, he even had the chance to tell Steve just how much he adores him.

Usually known as the superhero Falcon, Sam Wilson became the next Captain America and the new leader of the Avengers after Steve Rogers retired. Sam was handpicked for the title by none other than Steve, who personally gave him the famous shield.

In many ways, Sam was the natural pick, as he is the best to be described as having the SPIRIT of Captain America.

Sam is really a Mini-Steve! Like Steve, he is loyal to his country, perseveres for what he knows is right, and sticks to his morals.

Yes, he is still a Mini-Steve, but Steve was once a Mini-Steve too. Sam earned his spot fair and square, and besides, I think we can all trust Cap’s judgment.

Just like Wonder Woman‘s famous bracelets, sword, and armor, Diana is a famous DC female superhero with a shield that was made on the paradise island of Themyscira.

Although not as iconic as her bracelets and Lasso of Truth, the shield really boosts both Diana’s attack and defense, as it can be used to shield her from blows, but also to harm nearby foes with forceful thrusts and throws.

Because the shield is imbued with magic, it can deflect things that you wouldn’t expect a regular metal to deflect. In fact, it is practically indestructible, as we saw in Batman vs. Superman: Dawn of Justice where it withstood blasts from Doomsday.

After Captain America died in Civil war, it was revealed that Steve’s dying wish was for Bucky Barnes to take his place.

As you can probably guess, Bucky’s time as Captain America was completely different from that of Steve’s. For example, while Steve rarely used extreme measures, Bucky practically used just those. Of course, this made Bucky a fan favorite almost overnight, and he remained just that ever since.

It should come as no surprise that Cap is my top pick for this list of superheroes with shields. After all, his name is a synonym for a shielded superhero.

Captain America’s shield is made of Vibranium which, like the name says, absorbs vibrations and stores that kinetic energy between the molecules. Now, the reason why the shield is capable of ricocheting off walls is that, unlike normal objects which absorb or release energy at different rates when agitated, the shield does both of them at the exact same rate.

No matter how many walls it hits, it will continue to move at the same speed it was thrown. Couple that with Cap’s enhanced ballistic sense, and it seems the shield acts as if it doesn’t obey the laws of physics.

In other words, Cap has control of the shield that other superheroes can only dream of.