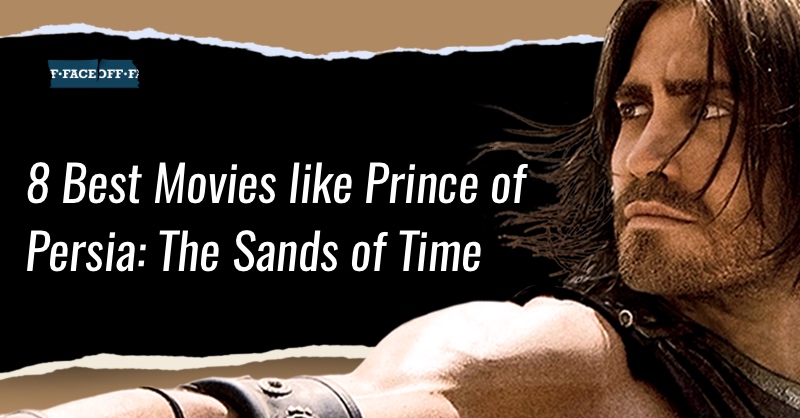 If you are here right now our guess is that you are looking for movies like Prince of Persia: The Sands of Time. This list includes exciting movies with similar elements. If you love action, adventures, heroes, princesses, fantasy, and ancient history, then boy have we got some great movies for you.

Based on the video game of the same name, Prince of Persia: The Sands of Time was the highest-grossing video game film until it was surpassed by Warcraft in 2016.

Set in medieval Persia, the film tells the story of an adventurous prince who teams up with a mysterious princess to stop a dark lord from unleashing a sandstorm that could destroy the world. The only way to do that is to safeguard an ancient dagger capable of releasing the Sands of Time – a gift from the gods that can reverse time and allow its holder to rule the world.

Best Movies like Prince of Persia: The Sands of Time

As implied in its name, Prince of Persia: The Sands of Time sure has a lot of sand in it (sandstorms, sand traps, and just plain trillion grains of sand). The Mummy has a lot of sand (weird CGI sand, mostly), but also a lot of other similarities to Mike Newell’s film.

While serving in the French Foreign Legion, American adventurer Rick O’Connell discovers the ruins of the ancient city of Hamunaptra, where Egyptian high priest Imhotep was buried alive 3000 years before. A few years later, O’Connel partners with Evelyn – a beautiful librarian and aspiring Egyptologist – and her brother Jonathan and guides them to the city. Unfortunately, Evelyn accidentally performs a ceremony that awakens Imhotep. When Imhotep returns to full strength he brings the ten plagues back to Egypt. Can the Trio send Imhotep back into the grave?

If you like movies that have action, romance, horror, ancient Egyptian “history” and bugs that burrow under your skin and eat you from the inside out, The Mummy is the perfect movie for you.

Just like Prince of Persia, Warcraft is based on a video game series with the same name. The movie grossed $439 million worldwide. It surpassed Prince of Persia: The Sands of Time as the highest-grossing video game adaptation of all time.

In the world of orcs, Draenor is dying by a mysterious force known as “fel magic”. To save the orcs, the mighty sorcerer Gul’dan opens a portal to the world of Azeroth. It’s another world in which seven kingdoms of humans, dwarfs, and elves live together in peace.

The orcs begin to attack human settlements and take as many prisoners as possible. The warlock Gul’dan will be able to use their souls to open the gate again, for a longer time, and bring all the tribes of the Orcs to Azeroth.

Durotan, head of one of the orc tribes, recognizes that Gul’dan’s ways are dangerous for the orcs. As a result, he decides to join the humans against Gul’dan. Both Durotan and the humans will find themselves struggling against dark forces that slowly reveal themselves.

Half of the characters in Warcraft are CGI-based, the movie looks great, colorful, and realistic. The computerized orc not only interacted convincingly with each other but with the live actors too.

Just like the Prince of Persia, Gods of Egypt takes us to an exotic place and time where magic and mysterious deities exist. Set, the god of darkness usurps the throne of the Egyptian Empire and declares that mankind must pay riches to pass into the afterlife. Horus, who was supposed to be the king is stripped of his eyes and exiled. A year later, a thief named Bek steals one of Horus’ eyes from Set’s treasure vault and gives the eye to Horus, promising to find the other if Horus will bring back to life his lover Zaya. Bek and Horus team up to try to fight Set and save the empire.

Gods of Egypt is visually spectacular and quite entertaining. It opens a window to an ancient culture from the Middle East that is somewhat absent from American cinema and possibly stimulates the viewers to further explore Egyptian mythology.

If you liked the Persian army in Prince of Persia: The Sands of Time and the fighting scenes then you’re into a treat!

Based on Frank Miller’s comic book of the same name, the epic film depicts the brutal battle of Thermopylae (480 BC) during the Persian Wars. The plot revolves around the spartan warrior King Leonidas and his 300 Spartan warriors. His army fought against the Persian “God-King” Xerxes and his invading army of more than 300,000 soldiers. As the battle rages, Queen Gorgo attempts to rally support in Sparta for her husband and his men.

Miller, one of the most brilliant illustrators and narrators operating in the comics world, and Snyder, one of Hollywood’s best directors have teamed up to tell the tale of the brave Spartan warriors in the only way they know how: with splashes of blood, mutilated corpses, flying heads, amputated body parts and a huge box office revenue.

South Boston boy, Jason Tripitikas, is a fan of Hong Kong cinema and Kung Fu. In one of his searches for martial arts movies at a pawn shop in Chinatown, he discovers a golden staff, the weapon of the legendary warrior known as the Monkey King.

It is not long before Jason finds himself miraculously in ancient China, where he meets a traveling scholar, Lu-Yan. She is a beautiful woman who goes by the name of the Golden Sparrow. A silent and mysterious monk. Together the four set out on a quest to find the Monkey King who was transformed into a stone statue by the Jade Warlord about 500 years ago. Only his golden staff can set him free.

On their way, the gang will have to deal with countless soldiers sent by the Warlord and the witch Ni-Chang to whom the Warlord promised the elixir of immortality in exchange for the golden staff. On the way, Jason learns a lot about Kung Fu fighting and also about friendship, loyalty, and respect.

The Forbidden Kingdom is a fun movie, with great action sequences (choreographed by the great Yuen Woo-ping, who also choreographed the fight scenes in The Matrix, Crouching Tiger, Hidden Dragon, and Kill Bill).

The story follows pirate Jack Sparrow – a captain without a ship, without a crew, and without honor – and blacksmith Will Turner as they try to rescue the kidnapped Elizabeth Swann from the cursed crew of the Black Pearl, Sparrow’s former ship that is now captained by Hector Barbossa, who become undead skeletons with torn clothes in the moonlight. A

long with Captain Jack will set out on a stolen ship – the ‘interceptor’ – to rescue his lover Elizabeth. They are perused by the lawmen, in a huge warship called ‘Dauntless’. Soon, they all start shooting at each other.

Pirates of the Caribbean is a fun film that manages to combine the nostalgic spirit of classic films from the fifties with technology and contemporary storytelling. The casting of the actors, led by Johnny Depp, is excellent and the selection of the team behind the camera is successful. Pirates of the Caribbean has polished action and great humor that makes it a must-see movie.

Clash of the Titans is a remake of the 1981 gladiator cult film of the same name. The plot revolves around Perseus, a fisherman who does not know that he is a demigod, the son of the mortal queen Danae, and Zeus, the king of Olympus.

Although Perseus wants nothing to do with the gods, who killed his parents, he soon finds himself as the leader of a band of warriors in an attempt to defeat the cruel gods and save the kingdom of Argos. On the way, he will encounter strange monsters, cross the Styx River in the depths of the underworld, cut off the head of the Gorgon Medusa and face a fateful battle against the Kraken and its master Hades, king of the underworld.

Clash of the Titans enjoys an impressive technical mastery, and good pace, and is overall quite entertaining. Even the jokes they throw in sometimes work. Oh yes, and the women are really beautiful.

If you are looking for sword and sorcery movies like Prince of Persia: The Sands of Time, and elements such as adventure, fantasy, and princesses are the ones that drew you to it, then we are certain you are going to LOVE Willow. That is why the film is our number one pick for this list.

The protagonist of the film is Willow Upgood, a lovable Nelwyn dwarf who dreams of being the best sorcerer in the world. One day his children find a raft in the river with a little baby girl inside. It turns out that the baby is a foretold Princess and the one prophesized to bring about the downfall of the evil sorceress Queen Bavmorda.

Willow sets out to find a human family and return the baby to her race. At a crossroads, he finds a young mercenary warrior by the name of Madmartigan who joins him on his quest. Bavmorda sends her beautiful daughter Sorsha to hunt down the baby, Sorsha soon falls in love with Madmartigan and defects to his side. Things get even more complicated when Bavmorda manages to get her hands on the baby and orders the preparation of a ritual to banish her from the world forever. Can Willow and his party manage to stop her?

Willow is one of the best fantasy movies ever made. The film is a celebration of special effects, strange magical creatures, crazy action scenes, and sweet kitsch moments.