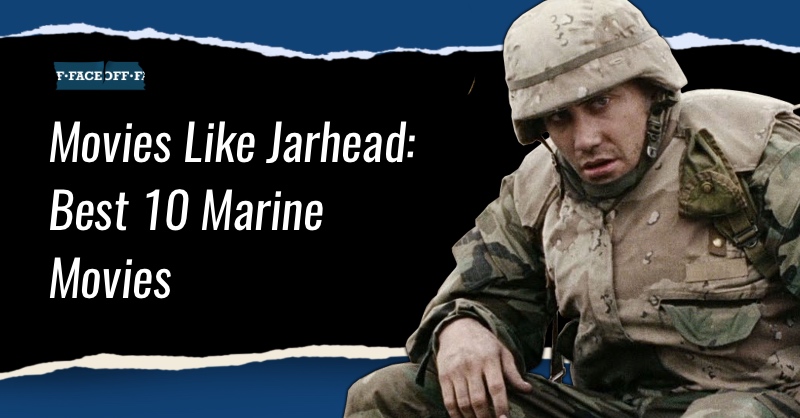 Oorah! The war movie loves Marines which is no wonder because Marines are a hardcore group of battle-ready elites. Whether it’s a boot camp setting or a mission in space, you just know the Core will deliver that special Gung-Ho feeling no one else seems to be able to provide. In this list, we have nothing but tough-as-nails, derring-do, and marines movies like Jarhead.

Academy Award winner, director Sam Mendes (American Beauty), brings to the screen the story of Anthony Swofford. He was a Marine sniper in Kuwait and Saudi Arabia during the Gulf War who wrote a book about his experiences on the battlefield.

The book describes the battlefield through the eyes of a young soldier. as he speaks hotly, in the face of enemies we do not know the way of life, and military men older than him with different contradictory beliefs. A young soldier looking for an explanation of what he is doing in the heart of a foreign country. The book by the way was one of the biggest bestsellers in 2003.

To decide which movies to watch depends upon what you like about Jarhead. if you like it for the U.S army, marines, war, or sniper elements then you would probably like the list of movies and tv shows below.

The plot based on the true story of Marcus Luttrell is breathtaking. Four members of an elite unit in the U.S. military are given a mission to kill a Taliban leader named Ahmed Saad, but not all return home from the entangled mission. Lone Survivor provides Taylor Kitch (the star of that cinematic flop directed by Berg and also directed the Disney box office disaster, “John Carter”) with a chance to prove he’s a worthy actor but it’s a relatively easy task since he has worthy reinforcement actors around him. All of these almost make us forget that movie star Mark Wahlberg is the lead actor. Berg manages to illustrate to the viewers in the most credible way the moments of horror that the four soldiers had to deal with.

An ex-marine sniper living in exile returns to activity after learning of an attempt to assassinate the president. He is incriminated in the act but does not compromise to find the real killer and clear his name. Anthony Fuqua is brilliant with an excellent movie. Starring Mark Wahlberg, it’s enjoyable to watch and leaves the viewer in suspense throughout the film. The best: a classic movie, snipers, cops, and politics. The bad: Not original, not surprising.

An intense film depicting the life of an elite unit of the U.S. Engineering Corps, during the fighting in Iraq, whose job is to dismantle bombs within urban areas. A new officer arriving at the unit stretches the limits of the unit’s ability and risk, leading everyone to life-changing experiences. It’s not a marine movie, but if you are looking for movies like Jarhead for the action scenes then Hurt Locker is full of them.

A fascinating and disturbing record of director Stanley Kubrick’s experience as a soldier in the Vietnam War. Full Metal Jacket discusses the human condition and invites a wealth of interpretations. The film is divided into two separate episodes. The first half deals with the training of the Marine Corps, in a way that removes from the young citizens their self-identity, on the way to bestiality. In the second part of the film, we move on to Vietnam – not to the green jungles but rather to the ruins of the city of Hua (filmed in the UK). Here Kubrick introduces us to the surrealistic, absurd, threatening nature of war.

A classic and sometimes disturbing film but very effective. The story of a talented American sniper (Bradley Cooper) who becomes a hero on the battlefield, but his abilities make him a target for the enemy, keeping him away from his family at home. In his films, Eastwood presents a protagonist who is always confronted with a tragic reality and asks himself whether to act to correct this reality and pay a price for it or not to do anything and live in immorality. The answer in most cases is to sometimes act cruelly and pay the price. Eastwood is America and America is Eastwood. A nation that is the greatest democracy in the world with violence and darkness at its heart and will do everything to preserve itself and do what it thinks is right.

Another war thriller by Clint Eastwood. A rugged sergeant who fought in the Marine Corps since the Korean War and through the Vietnam War. Due to his disrespect for his superiors in the military system, he is appointed to command a group of bored soldiers (Just like in the movie Jarhead) who do not take the Marine Corps seriously. Their hippie approach reminds him that he is, in his own words, anachronistic and useful only in cases of war. Despite their fierce opposition, he is determined to make his soldiers as serious as he is, and a war that is indeed imminent will determine whether he succeeds.

This is the first film in the trilogy of films about the Vietnam War directed by Oliver Stone. The film won four Academy Awards, and It’s another attempt by the director to deal with the trauma. The war in Vietnam is still considered by many to be the most unnecessary and bloody campaign the United States has ever known. A brutal war that brought with it many casualties to the American public, and quite a few moral questions. Platoon is a personal and emotional look at the platoon life of American soldiers on a tour, fighting, and death in the jungles of Vietnam, through the eyes of a young recruit. Two symbols confront the background of a massacre in villages.

Ron Kubik is a Vietnam War soldier who became paralyzed in his lower body and lost his sexual ability. He is gripped by guilt because incorrect information caused him to kill one of his comrades in arms and the cruelty to the civilian population. He rebels against the values ​​of society and becomes a pacifist activist. Director Oliver Stone chooses to deal with the problematic nature of representing the war by presenting its horrors, among other things. He describes how Kubic kills innocent civilians, women, children, and even babies.

In one of the most intriguing cinematic events of recent years, Clint Eastwood examines the Battle of Iwo Jima in February 1945 – a key moment towards Japan’s surrender, six months later – from two perspectives: the American in “Flag Heroes” and the Japanese in “Letters from Iwo Jima” “.

In terms of plot, Flags of Our Fathers is a multi-layered film: it begins in the recent past and describes the relationship between John “Doc” Bradley, one of the flag heroes, and his son, James Bradley, on whose book the film is based. Most of the film takes place during the fundraising campaign and deals with the three Marines’ dealing with the horrors of battle on the one hand, and their status as revered heroes on the other. Finally, the battle image itself is revealed through flashbacks that Bradley and Hayes experience during their triumphant journey

Eastwood adopts a directing style that amplifies the impact of the war experience: he chooses to use a limited and faded color scheme that shapes a gloomy atmosphere. It moves back and forth on the timeline, thus leaving the experience of the battles, photographed at the height of the helmets, engraved in the minds of the characters and spectators.

A Marine adventure for all intents and purposes. Close your eyes and imagine The Third Day. Then imagine District 9., War of the Worlds, First Blood, and every war movie about the heroism of the Marines in the American wars. Did you imagine? Great. You’ve just watched “Global Invasion: Battle of Los Angeles”, which is like the diluted DNA of all of the above.

Aron Eckhart enters a role as a Marines Major, with battle scars from Iraq, who just before retiring joins a new training department. As the Earth becomes the target of a global alien invasion, who have come here to conquer the planet, destroy the local population, and drink our water, the Sgt. And the Department set out on a mission to gather civilians from Santa streets Monica and return to base before attacking Air Force. But, a short, and simple mission becomes a huge battle for survival, the like of which – well – we’ve seen in dozens of alien invasion movies before.

Insight into the psychological state of veteran marines who were sent off at a young age to fight the grueling US-Afghanistan war. Directed by Marine veteran Stephen Canty, she posted this on Reddit: “Once a Marine took me 7.5 years to make and is now free if you have Amazon Prime. I urge you guys to watch it and please hook a fellow Marine up with a review on Amazon if you enjoyed it. After the war, socializing and keeping up with people has been pretty hard for me so it would mean the world if y’all can help spread the word in any way.”

This is a list dedicated to The Marine, and I feel it’s only appropriate to include Once a Marine in it. The link to watch the film on Amazon, along with all movies on this list can be found at the bottom of the page.