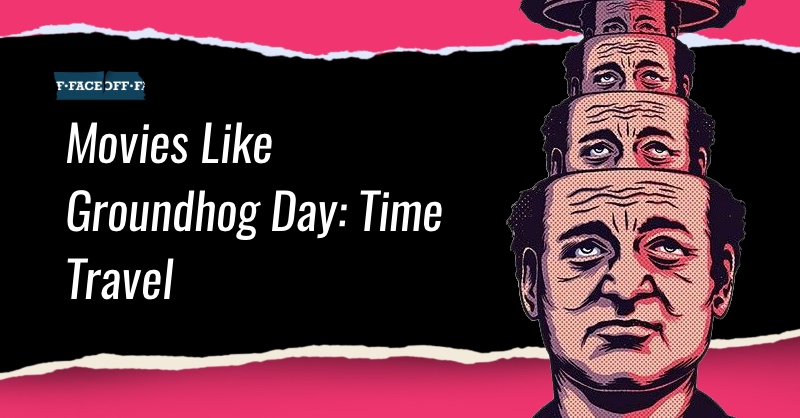 Common themes include: iconic time-machines, evil cyborgs from the future, characters who wind up in another time or dimension by accident, shaping-history heroes, “the future is a dystopian mess let’s fix it” characters, and “someone meets themselves from the future and that’s not a good thing” characters.

Bill Murray, in the lead role, plays a TV broadcaster who arrives with his crew in a remote town to cover a special event and finds himself waking up every morning on the exact same day, to the same situation, with the same scenery. Thus, he begins a fascinating journey of inner change, during which he discovers the secret of the magic of life.

“Rick and Morty” is a sci-fi animated comedy series with a grandfather and grandson flying on murderous journeys across the universe, fighting monsters, destroying stars, and waging political struggles and intergalactic relationships along with plots full of chaos and absurdity that flutter to reality.

Directed by Peter Hyams is a science fiction thriller, in which Van Dam is part of a special unit of futuristic cops launched into the past, in order to prevent future crimes that might disrupt the time sequence. Walker, played by Van Damme, exposes a conspiracy by a corrupt politician (Ron Silver) to exploit the potential of time travel in his favor. Mia Sarah plays his teammate in a plot that took place in 2004.

Nadia, the main character, is a woman in her 30s. She is a great anti-hero who loves alcohol and drugs, smokes non-stop and every second word that comes out of her mouth is a curse. Nadia is killed on the eve of her birthday and then finds herself again at the party she was in the beginning of that evening. Then again, then again, then again.

4. Back to the Future

Time Travel is the idea behind the “Back to the Future” series, one of the most beloved films of all time. In the first film from 1985, director Robert Zemeckis started the timeless Delorean car, sending the protagonist Marty McFly and the crazy professor Doc Brown to 1955. In the third and final film from 1990, they went as far as the 19th century. In between, in “Back to the Future 2” from 1989, the two arrive in 2015, which makes us wonder what would have happened to them if they had landed in our reality five years later, in 2020 – in a world that is all under pressure following the outbreak of the coronavirus.

Richard Kelly’s debut film, which has become a cult film, was chosen by quite a few critics as one of the ten best films of the year in 2001. A fine psychological thriller starring Jake Gyllenhaal, who plays Donny Darko, a suburban teenager who occasionally encounters a giant rabbit, and the hallucination that shows him visions from the past and deadly prophecies for the future. A poignant look at the darkest guts of American culture. A film rich in imagination, excellent acting, and excellent photography, will leave you speechless.

Boot for the Terminator series. When John Connor sends Sergeant Kyle Reese back to 1984 in order to protect Sarah Connor and secure her future, an unexpected turn of events creates a broken timeline in which the past has changed. Now, Reese finds himself in a new and unfamiliar version of his past, in which He faces unfamiliar allies, including the Assassin, new and dangerous enemies, and a new and unexpected mission to reboot the future

Deadpool suffers from an existential crisis following a personal tragedy and finds himself forced to defend the life of a young mutant from Cable, a powerful cyborg assassin who goes back in time.

For those unfamiliar with the “Doctor Who” אה series, this is the most successful sci-fi series that began in the 1960s. In the early 2000s, the series was renewed, raking in millions of fans from all over the world. The series follows the adventures of an alien who looks like a human and answers to the name “The Doctor”. The Doctor along with other characters travels through space and time in a spaceship called “Tardis”, and fights evil aliens and solves mysteries. What is special about Doctor (apart from the fact that he is an alien who can travel in different galaxies) is that it is able to die and be reborn with its memories in another body, and so far there have been 12 doctors played by different actors.

A series about powerful superheroes, based on an original comic The series begins with 43 children who were born on the same day in 1989, even though none of the mothers were pregnant that morning. But this starting point is not the strangest thing about it – the visuals of the series combine gloom with the pop culture of the sixties, the events are nowadays but there are no smartphones or internet, the plot is slow and vague, and most importantly – the superheroes do not really use their powers.