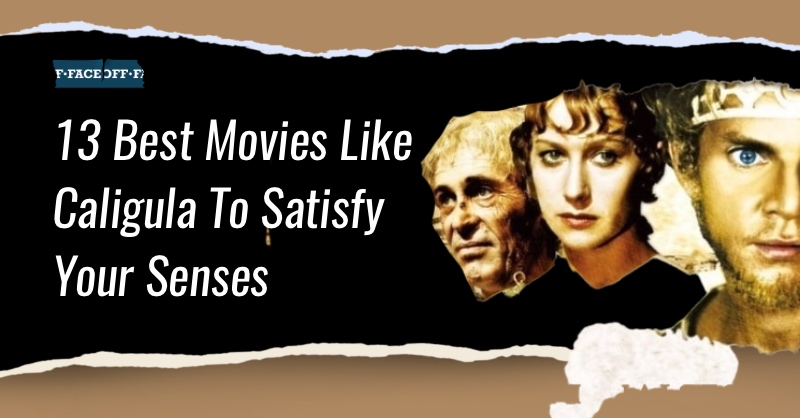 Here is a list of movies like Caligula that are in tune with those sorts of demented sexually perverted and power-mad rulers. The film received a 3.1 score on rotten tomatoes. Actors involved with the production asked for their names to be removed from the credits. Roger Ebert called it “Utterly worthless, shameful trash”. The 1968 film is considered the worst sci-fi ever. But the camera loved the gorgeous Fonda, her role paved the way for her next films. Caligula like Barbarella is considered one of the worst films ever made.

Plot: Caligula (Malcolm McDowell), the young heir to the crown of the syphilis-stricken and half-mad emperor Tiberius (Peter O’Toole), thinks he got a bad sign after a Thrush bird, flew into his room early one morning. Shortly afterward, Macro, (Guido Manari), the head of the Praetorian Guard, appears to inform the young man, that his grandfather demands that he go visit him on the island of Capri, where he has lived for several years with his close friend Nerva (John Gielgud). Caligula, who fears he will be assassinated on his way, is afraid to leave, but his beloved sister Drusilla (Teresa Ann Savoy), convinces him to go on a journey to his grandfather.

I don’t think it’s that bad. I’d call it a guilty pleasure. I guess that you are here searching for a similar movie to Caligula, not for quality purposes. So relax and enjoy this list of movies to satisfy your senses.

Set in Hong Kong during 1938 and the Second Sino-Japanese War. A shy and inexperienced student, Wong Chia Chi (Tank Wei), travels from Shanghai to Hong Kong in order to start her first year at the University. A student named Kuang Yu Min (Wang Leehom) invites her to join his patriotic drama club. She soon becomes a leading and inspiring actress both among her audience and her colleagues.

Inspired by the band’s patriotic plays, Kaung convinces the group to contribute more to the war against Japan. He plans to assassinate Mr. Yee, a special agent, and recruiter of the Wang Jingwei puppet government, set up by the Japanese occupation of China.

This is a really mesmerizing film by legendary director Ang Lee. A throwback to a different historical era, with different esthetics and hypnotizing cultural codes.

​​The film follows the decline of a Sicilian aristocratic family, whose symbol of nobility is the Leopard.

During a period of great change in the second half of the 19th century, the family is preoccupied with the matchmaking of the prince’s young nephew to an established family member, Angelica, so that Tankridi can continue their dynasty. A great classic with legendary Alain Delon.

A Sicilian drama as you expect it to be – full of erotics, emotions, tears, and family intrigues and manipulations.

The film follows the famous – Marquis de Sade, who was born in Paris and lived during one of the most turbulent periods in the history of the French nation: the French Revolution when hundreds of years of monarchy came to an end.

He is well known for his writings and as the person after whom the term “sadism” is signed, other than that, De Sade was a gifted, sharpened writer, persecuted all his life, and spent more than 27 years in prison. With Geoffrey Rush and Kate Winslet.

A biography drama that will take you to Paris – with its colors and smells and lust. The film also reveals the questionable character of the Marquis de Sade.

Historical Korea of ​​the 1930s, the days of the Japanese occupation. A girl is sent to serve as a maid of a Japanese heiress living with her domineering aunt in a spacious and secluded mansion. But the new maid has a secret. She was actually recruited by a crook impersonating a Japanese Count to help him seduce the established lady, persuade her to marry him, rob her of her fortune and imprison her in a madhouse. The plan progresses as planned until unexpected feelings begin to arise between the two women.

Park Chan-wook’s film shows the Korean master at the height of his power. It is a clever work that combines a story full of twists, and full of lust, just like Caligula.

See recommended: 17 Korean Hottest Movies To Heat Up Your Night

It’s not always good to be the Queen. Juana of Castile (Pilar López de Ayala ), is 74. Her nickname – Juana la Loca – Juana the Madwoman, is a name that she was given because of the envy she had for her late husband. She is still mourning the loss of him, although he died a half-century before. Juana remembers with emotion the man she loved passionately, but who brought her ruin.

She does not fear death, she says, because death would allow her to be reunited with him. Their story goes back almost 60 years back. They married before even seeing each other as a royal marital arrangement between Austria and Spain.

Juana and King Philip fell madly for each other, had a really passionate married life until her husband took him a few mistresses, and Queen Juana went on a downward spiral of envious tantrums. When her mother died and she had to go back to Spain and take the crown, things got even worse.

Passionate royal romance: infidelities, envy, and flames – basic elements for a great romantic and epic film with a hint of European history. If you like this movie you can learn more about Juana’s mother, the formidable Catholic monarch, Isabella I of Castile, by watching the Spanish medieval series, Isabel.

The rise and fall of Grigory Rasputin (Aleksei Petrenko). A Russian mystic and self-proclaimed holy man, who befriended the family of Nicholas II, the last emperor of Russia. Rasputin gained a lot of influence in late Imperial Russia. The film follows the last months of Rasputins’ life till he was assassinated – His mesmerizing character, his corruption, and his madness.

If you are looking for movies like Caligula while diving into the history of Russia, this is the film for you.

A group of Roman soldiers (Michael Fassbender, Andreas Wisniewski, Dave Legeno, Axelle Carolyn), fight beyond enemy lines, to save their lives after their legion was attacked and defeated in a guerrilla attack by Celtic tribes.

Even Though it might not be 100% accurate to the historical storyline, it definitely gives you the sense of being a Roman soldier participating in Roman battles during ancient days.

Based on the well-known play by William Shakspeare – at the center of the plot is a trio of witches convincing Macbeth (Denzel Washington), that he will become King of Scotland – the witches greet Macbeth and Banko and give them the prophecy, While Macbeth and Banko ponder the meaning of the prophecies, the witches disappear, and a messenger from the king announces to Macbeth that from now on he becomes the ruler of his city. Almost immediately Macbeth raises his eyes to the Scottish throne.

Macbeth writes to his wife, Lady Macbeth (Frances McDormand), and tells her about the prophecies. King Duncan decides to sleep in Macbeth’s castle, and Lady Macbeth initiates a plan to assassinate him. A dead king will help her husband get the throne. Although Macbeth initially opposed his wife’s plot, he eventually agrees to the plan.

It’s the first film Joel Cohen (Cohen Brothers) directed alone. Pretty well crafted but doesn’t do justice to the famous theatre play. It’s way too theatrical move and too artistic to hide the fact that nothing is going on.

The movie follows the Tang dynasty that ruled the Chinese Empire centuries ago. The king (Chow Yun-Fat), has taken for himself a beautiful princess (Gong Li), from a neighboring kingdom. Over the years she gave birth to two sons and raised his eldest son. Surprisingly she even had an affair with her stepson while her husband and father were in a battle. The king returns from the battlefield, to take care of the real battle that takes place in his own palace.

This melodramatic movie is full of passion. You can have a glimpse of ancient China, its costumes, and its culture – it’s colorful and full of hidden emotions and passions.

This historical saga describes the life of one of the greatest figures in world history – Alexander the Great (Colin Farrell). The epic story is as daring and ambitious as its protagonist. A restless conqueror who at the age of 32, has already become an undisputed ruler of the greatest empire the world has ever known.

Past and present collide with each other to create the fascinating puzzle of Alexander’s life and character. A fascinating collage of victories and tragedies that tell the story of Alexander’s rise to power. Oliver Stone on another masterpiece – with Colin Farrell, Angelina Jolie, and Anthony Hopkins. Farrell had to shoot steamy scenes with other men and women as the unstoppable warrior who swung both ways.

The life of Austrian composer Wolfgang Amadeus Mozart (Tom Hulse), from the point of view of the Italian composer Antonio Salieri (F. Murray Abraham), who was the court composer of Emperor Joseph II in Vienna. Older Salieri is hospitalized in an asylum, seeking to confess to a priest his sins before his death. Salieri was fascinated all his life by classical music and sees in it the voice of God.

Before meeting Mozart, Salieri was very impressed with his works and talent. After the first meeting with Mozart and his future wife Constanze (Elizabeth Berridge), he was shocked by the gap between Mozart’s crude and childish nature, his low moral values, and his genius music.

He is filled with intense jealousy of Mozart, and as a conservative catholic he is angry at God who chose to be heard through an indecent, lustful, arrogant, and infantile Mozart while giving him only the ability to recognize your incarnation on earth. He decides to take revenge on God through the destruction of Mozart. Salieri connects with Mozart, and without his knowledge, he does everything he can to damage Mozart’s reputation.

Safiye (Marie Gillian), is the favorite daughter of the sultan during the crisis of the monarchy and the displacement of the Ottoman empire in Turkey. Safiya falls in love with the young Nadir, a non-royal and the son of the personal guard of the sultan. The two young lovers plan their future, but war breaks out. The girl is forced to escape from her country and the lovers are forced to go their separate ways.

This romantic story is also a feministic drama. It tells the story of the fall of the Ottoman Empire and its consequences.

In 1788, not long after losing colonies in America, King George the third (Nigel Barnard Hawthorn), has weird physical symptoms. From a sympathetic and well-liked ruler, he becomes an unbearable man. He wakes up at insane hours, swears a lot, attacks the ladies of the palace and all his manners are distorted.

This situation leads to a system of intrigue against him, led by the prime minister and heir to the throne. Surrounded by opportunistic doctors and other key-role opportunists, only his wife Charlotte (Hellen Miren), and one of his officers remain loyal to the pathetic monarch. If you like a good throwback to the past, this one is a wonderful glimpse of behind the scenes of British royal corridors.