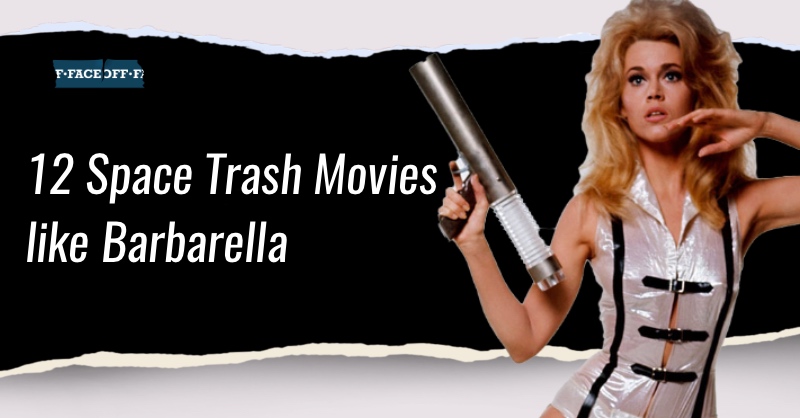 Roger Vadim, the French director, turned Jane Fonda who played Barbarella, into a clone of Brigitte Bardot. It’s one of the first films made with the idea of adapting a comic character to the big screen, long before Batman and Superman.

Barbarella like Caligula is considered one of the worst sci-fi films ever made. But the camera loved the gorgeous Fonda, and her role paved the way for her next films. If you want to watch more movies with this kind of “appeal”, check out this list of movies like Barbarella we prepared for you.

Special agent Neil Agar is sent out to the small town of Peckham California to investigate the deaths of multiple men, including a bacteriologist working at the nearby Brandt Research Laboratory, due to congestive heart failure caused by sexual exhaustion. Agent Agar quickly suspects that the deaths may be related to research by Brandt’s own Dr. Susan Harris, a beautiful scientist, who happens to be working on bees.

Practically the definition of a B-movie, Invasion of the Bee Girls is a low-budget Sci-Fi flick with generous amounts of murder sequences, nudity, and sex. The result is strangely entertaining and the film even has a kind of women, feminist angle.

After a narrow escape from a space gulag, Daria and Tisa crash land on a strange planet. They are greeted and welcomed by a charming host, Zed, who lives in a large fortress, guarded by his two android servants. It doesn’t take long for the girls to realize they are merely prisoners in Zed’s sick world, where he hunts his guests for sport.

Slave Girls from Beyond Infinity isn’t your run-of-the-mill sci-fi flick. It features beautiful, scantily clad women who are more than just eye candy and a fun script that, thankfully, never crosses over into territory too hokey to enjoy. The film features a capable cast, a fun story, and attractive women. What more could you ask for? If you liked the robot and monster elements in Barbarella, then Slave Girls from Beyond Infinity is the movie for you.

“Don’t call me Babe!” It’s The Second Civil War and the whole continent is in a state of emergency. The so-called former US Congress is now ruled by fascists. Only one city remains free, a city where the underground grew up. Its motto is not to take a stand, but to perform a task. But when a former girlfriend comes to ask for a favor, she finds herself taking a stand and getting into a confrontation with political meanings.

The sci-fi trash movie had the 90s blonde babe Pam Anderson running on a big screen while in a tight swimsuit (or no clothes at all). The film was slaughtered by critics and was nominated for several Golden Raspberry Awards. Barb Wire also failed at the box office, grossing only $ 3,794,000 in the United States.

In this musical comedy, Valerie (Geena Davis) is dealing with her philandering fiancé, Ted (Charles Rocket), when she finds that a trio of fry aliens (Jeff Goldblum, Jim Carrey, Damon Wayans) have crashed their spaceship into her swimming pool. Valerie attempts to help them get their ship in working order and to hide out while they’re here.

The plot is based on the song “Earth Girls Are Easy” from Julie Brown’s 1984 mini-album Goddess in Progress (hence how it was adapted into a full musical so easily later on). Earth Girls Are Easy is an out-of-this-world, down-to-earth romantic comedy and a true 80’s gem.

While researching Halley’s Comet, the crew of the space shuttle Churchill discovers an ancient alien battleship in its tail. Inside, the crew discovers three humanoid bodies in suspended animation within glass containers. The beings are brought to Earth to be tested where they promptly escape but not before draining a guard of life. Later the seemingly dead guard awakens and drains a doctor of life just as he was. It seems the aliens are like vampires and spreading this need to drain life from others like a disease. As the authorities scramble to recapture the space vampires and contain the outbreak it soon becomes clear that the whole of Earth is at risk.

The story bends genres going from sci-fi adventure, to a detective story, to body horror, to zombie outbreak story. Overall, Lifeforce is a movie that needs to be on any horror nerd’s list.

Gwendoline is a courageous but naïve girl who has escaped from a monastery to look for her missing father. Along with her is her maid and faithful companion Beth. Captured by a trio of thieves at a Chinese port, Gwendoline is sold to a local casino-brothel owner, but, rescued by Willard, a mercenary adventurer. Gwendoline is able to con Willard into helping her and Beth find her father, who went missing looking for a rare butterfly. Gwendoline, Beth, and Willard encounter numerous dangers throughout the film. The butterfly they seek is in the legendary Land of the Yik Yaks but no one has ever returned from there alive. Things REALLY get interesting when they are captured by scantily-clad Amazon warriors, ruled by a cruel and sadistic queen. Actually, when our heroes enter the city of the Amazons, things just go off the wall crazy!

The Perils of Gwendoline in the Land of the Yik-Yak is not an indirect film as it knows exactly what its intended audience wants, which is action, nudity, thrills, more nudity… and a little more nudity.

Written and Directed by Roman Coppola (Francis Coppola’s son, no less), and starring Gérard Depardieu(!) CQ is a story about a film crew in 1969 Paris who are shooting a Barbarella-style sci-fi flick called Codename: Dragonfly. The director’s infatuation with his film’s star, who is playing the sexy character, a freelance secret agent Dragonfly, has clouded his judgment and he has no real idea for the movie’s ending. A young American, in Paris to document his life on film with total honesty, is brought in to finish the movie with a satisfying end. Unfortunately, this proves almost impossible when the line between fantasy and reality becomes blurred, and he finds himself seduced by the charms of Dragonfly.

Emperor Wang the Perverted bombards Earth with his mighty “Sex Rays”, which send people into a sexual frenzy. Football player Flesh Gordon (Jason Williams) rises to the rescue. Together with his girlfriend Dale Ardor and hermit scientist Dr. Flexi-Jerkoff, they set off towards the source of the Sex Ray, unaware of the perils that await them!

The script is genuinely funny and director Howard Ziehm lovingly recreated the look and feel of the original Flash Gordon series of the 1930s. However, the film was not well received.

See relevant: The Top 12 Best Movies Like Guardians Of The Galaxy

This low-budget Al Adamson Sci-Fi Flick is set in the year 2047, where all sexual activities are illegal. Weirdly, if someone tries to break the no-sex law a robot barges in screaming, “Fornication without sanction!” Despite all odds, one young girl tries to outwit the Big-Brother-like government so she can be with the man she loves.

Basically, Cinderella 2000 is a futuristic version of the classic Cinderella story, but with songs and X-rated sex scenes! If you like these sorts of things, you will surely enjoy this take on Cinderella.

The sky is the limit in this sexual space fantasy. In the year 2088, three intergalactic space maidens by the names of Star Babe, Twinkle Toes, and Milky Way, are on an assignment from The United World Space Agency. Their mission is to head out to the planet Phallus, rumored to be plotting an overthrow of Earth. The three Star Angels are instructed to interrogate the local government men in their various talented ways and to prevent a takeover of Earth.

Like Barbarella, which starred Jane Fonda as a female James Bond, vanquishing evil in the forms of robots and monsters, our three-star babes are uninhibited when it comes to completing their mission.

When an alien cargo battleship makes a forced landing on Earth, four sexually frustrated humans (three men and a woman), wander inside. They encounter its all-women crew who quickly take off back to space. The aliens study the earthlings in detail, especially fascinated by the anatomy of the three male guests. They soon show interest to discover the delights of sexual intercourse (with men).

You can probably imagine the rest. If you enjoy British Sex Comedies of the 70s then Spaced Out certainly got a better-set design than most.

A group of interstellar aliens known as the “OraGasms”, whose social structure is similar to bees or ants (with the Queen in charge) invade Earth in a phallic-shaped battleship. Their scheme? To absorb Earth’s sexual energy which is their food (all the sex energy is stored up to help make more alien-queens). It is done by turning a guy into a “love drone” and sending him back to Earth to create more love drones, which is done by having sex with other people. Soon Earth is crawling with zombie love drones!

Earth’s scientists receive transmissions from an alien source, which contains a mysterious genetic formula. The scientists assume that this is a friendly alien species. They follow the transmission’s instructions and create a genetic hybrid of human and alien DNA. The result of this scientific experience is a girl named Sil – an apparently normal female human who happens to grow at an accelerated rate. Sil soon breaks out of her containment cell and escapes on a train bound for Los Angeles. A motley crew of scientists and government agents try to track her down and kill her before she successfully mates with a human male.