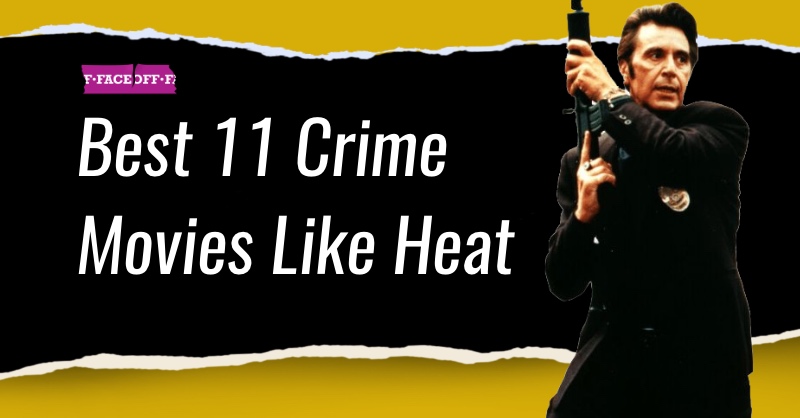 If you like Heat for the detective work, the cast and mouse chase, the action, the interpersonal relationships, the pacing, the character development, and the thriller/tension scene, then you’d want to add this list of similar crime movies for your next binge. Heat was directed by Michael Mann, one of the most consistent thinking and stylish action directors of our time. It’s a big-budget remake of LA Takedown (1989), which was written by Mann as a pilot for an NBC TV show, before being reworked as a TV Movie.

Lieutenant Hanna (Al Pacino), is an obsessive and sophisticated police detective, who is on the trail of a master criminal named Neil McCauley (Robert De Niro), and members of his gang. While the mind battle continues, it turns out that they have much more in common than they initially thought, and both discover mutual respect even as they try to ruin each other’s plans.

Ray and Ken are professional hitmen from London. They are sent by their psychopathic boss on a “trip” to the city of Bruges, Belgium. The trip stems from Ray’s unsuccessful job. The two are supposed to enjoy the historic atmosphere and tourist landscapes that the Belgian city has to offer until the big boss Harry give them instructions. Ken decides to make use of the time to rest a bit, while Ray is much less impressed by the surreal atmosphere and finds interest in quarreling with American and Canadian tourists. He even finds love with a young local. But Ray and Ken were not just sent on vacation – Ken was supposed to eliminate Ray. But, he actually likes the young and childish criminal. When Harry realizes that Ken is not going to eliminate Ray he is forced to wander as far as Bruges to make sure the work is done properly.

A crime movie with similar quality. What’s interesting about “Bruges” is that it looks like q usual crime film but slowly and consistently it becomes a dark comedy about the meaninglessness of life and the expected end for everyone who walks across this planet no matter what age they are. Despite its light-hearted appearance eventually, IT turns out to be a deep, gloomy, and pessimistic cinematic masterpiece with a surprising and cruel ending.

​​Kate Macer, an idealistic FBI agent, is recruited by a special elite government unit, to help in the escalating war on drugs in the No Man’s Land on the U.S.-Mexico border. The team, led by a mysterious counselor with a questionable past, embarks on a secret journey that causes Kate to be exposed to unbearable realities and doubt everything she believes in order to survive.

The brutal Mexican drug cartel gun movie is full of realistic fire gun sequences. It carries the kind of silent and floating scenes that play out like “Heat.”

Following the terror attacks of 9/11, a group of CIA operatives, led by analyst Maya Harris are based in Pakistan, trying to locate the most wanted man on earth – Osama bin Laden. Following their efforts, in 2011, Navy Seals launch a nighttime strike, killing bin Laden in his compound in Pakistan.

The action scenes, which last about 25 minutes in the film (the duration of the real operation was 38 minutes) are some of the most believable gunfight scenes seen on screen in recent years. Similar in the tension that builds, the stark/dark visuals, and the sudden, explosive, and gritty violence.

Keith Frazier is a tough detective, drawn into a mind game with Dalton Russel (Clive Owen,) a manipulative bank robber, during a tense hostage crisis that unfolds. The robbers divide the hostages into groups and hold them in different rooms, forcing them to wear clothes identical to their own. The robbers rotate the hostages among various rooms and occasionally insert themselves covertly into the groups. Meanwhile, the bank management hires a mysterious broker with hidden agenda, to try and help out with the situation, an intervention that will push things to the limit and reveals dark secrets from the past.

Inside Man got the same twists similar to Heat, where you can’t figure out how you didn’t see it coming till the end, and where you jump from the police perspective and inside as well.

Jack Hoyt (Ethan Hawke), Is a former Los Angeles security guard, who has applied for the LAPD position as a Narcotics Officer. As part of his training, he has to spend 24 hours with Alonzo Harris (Denzel Washington), a Vatern Narcotics officer in action. Hoyt soon realizes that his mentor has a questionable approach to the position – he is treating victims with bad behavior, abusing suspects, and opening fire very easily. Hoyt finds himself in a moral dilemma and has to watch for his own interests.

The plot of the film here is interesting in itself, though not complex. What sets this movie apart is simply a complex and in-depth sketch of two characters – one, of the corrupt but charismatic coach, full of street wisdom and the other is of the idealistic young cop, torn on the one hand by the desire to prove himself in a long-awaited role, and on the other Among the moral sacrifices the role demands of him.

A group of Marine soldiers is taking over Alcatraz prison demanding ransom – as compensation for families of Marines in covert operations that didn’t receive any. They are threatening that if they won’t get the ransom, they will attack San – Fransisco with chemical weapons. The only people who can stop them are FBI chemical warfare expert Stanley Goodspeed (Nicolas Cage), and a former dangerous criminal (Shean Connery), the only person ever to escape Alcatraz prison.

There is nothing you have yet seen in terms of special effects (Mind you it’s a film from 1996), but it is tastefully spiced with blows, shots, deadly VX balls in phosphorescent green, and also some nice explosion every few minutes to maintain a basic level of coolness. The hallmarks that will characterize Bey’s action scenes are here – from fast-cut editing to grandiose camera movements. There is not too much logic behind the exploding cars or plot logic behind the actions of their protagonists, but logic has never been the strong point of films of this kind.

Clarice Starling (Jodi Foster), is an FBI cadet with a background in psychology. Being an orphan from a father with a past in the police force, she has a huge ambition to get into his shoes. Her commander, Jack Crawford calls her to his office with an opportunity to prove herself – She is called in to interview Dr. Hannibal the “cannibal” Lecter (Anthony Hopkins), one of the most horrific serial killers and a criminally Insane villain. His story consists of brutal murders accompanied by acts of cannibalism. Lecter Begins to provide Clarice with information, and she begins to open up and let him manipulate her. Their sophisticated mind game helps Clarice to track an active cereal killer.

This crime movie requires at least one page of summary. A variety of colorful characters in a plot revolves around one thing, the aspiration of which is common to all: money. A precious diamond is robbed in an amusing scene at the beginning of the film, and begins its journey around London, with a host of gangs and guys running after it. Among other things, we meet insane assassin killers, members of a Jewish bakery, a black fraternity trying to make a fuss, an insane gypsy with an iron fist and his loving mother, two junior gambling organizers, a mad Russian arms dealer who simply refuses to die, and one big criminal arch. Oh, yes … and a dog, too.

Director Guy Ritchie wrote a witty, fluid, funny-to-tears script despite its absurdity, and certainly demand. He wrapped the script in a polished and rhythmic direction and did not add a single unnecessary scene to the film. It is a well-wrapped crazy plot, which brings the viewer to meet a variety of disturbed and amusing characters, and soaks up an atmosphere of “being in the underworld of England”. The excellent direction is backed by an A-list cast, very authentic and reliable.

If you got into watching heist or robbery movies like Heat. Danny Ocean is not wasting a moment, less than 24 hours after his parole he is already planning his next project. This time it’s a casino robbery on a scale like Las Vegas has never seen before. With his charisma and experience as a first-rate thief, Danny plans the biggest casino robbery in history and for him, everything sanctifies the purpose. One night he recruits a team of 11 experts including Rusty Ryan, his right-hand man and card man, Linus Caldwell, a pickpocket with the most nimble fingers, and Asher Tar, an explosives expert. The goal is to rob $ 150 million from three Las Vegas casinos owned by Terry Benedict who just happens to be dating Danny’s ex-wife, Tess. Coincidence or motive? Only Danny Ocean knows the answer but what is certain is that in this robbery he is endangering both his life and the possibility of reuniting with Tess.

The story of a lawyer, Martin Weil, the kind of lawyer everyone loves to hate: those who defend criminals, murderers, and other crooks to get good money and publicity. He knows every trick in the book, every precedent, and he will do anything to get his client the most effective protection – regardless of whether he is guilty or not.

Our story begins (or rather, goes into gear) when the Archbishop of Chicago is assassinated, and a young boy covered in blood escapes from the crime scene from head to toe – known in professional parlance as a “closed case” – and the prosecution goes to make sure that boy, Aaron Stampler (Edward Norton in the lead role), is going to get the death penalty he deserves. But then comes Weil, who is willing to defend Norton for free, for the same deceptive reasons, and slowly begins to believe that there is no way Stampler did it either: this innocent-looking boy lookalike someone who is unable to harm a fly, certainly not the Archbishop, and certainly not to stab someone 78 times with a butcher knife, castrate him and take out his eyes. Can he?

It’s one of those classic mid-1990s dark, twisted films, about murders, courts, and lawyers, and Edward Norton is somehow in it, likewise, ​the end makes you drop your jaw.

One of the most beloved action crime movies of all time. A gang of bank robbers calling themselves “former presidents”, prosecutes several bank robberies in Los Angeles, over the past three years. They commit perfect robberies while wearing Reagan, Carter, Nixon, and Johnson masks, and manage to deceive the police and FBI. Rookie agent Johnny Utah (Keanu Reeves), is sent to work on the case, along with a veteran partner (Gary Busey), that convinces him that the robbers are surfers. Utah works in a covert role as a surfer, while he connects with a charismatic surfer named Bodhi (Patrick Swayze), who has a deep philosophy of surfing, and teaches Utah the thrill of adrenaline and life on the edge. Utah tries to focus on his undercover mission, while he is drawn into the fascinating world of surfers.