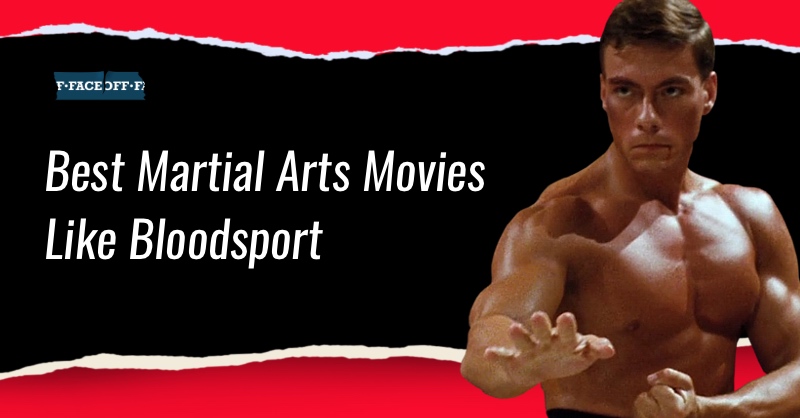 If you’re a fan of Van Damme and you are looking for movies like Bloodsport, we prepared a list of similar martial arts movies that left a lasting impact on the genre. Bloodsport tells the story of the US soldier Frank Dux. He has come to Hong Kong to be accepted into a highly secret and extremely violent martial-arts competition.

While trying to gain access into the underground world of clandestine fighters, he also has to avoid his officers who consider him to be a deserter. Van Damme is at his best with a lot of action and humorous dialogues and extra entertaining and coordinated fighting scenes.

Lee (Bruce Lee) is a martial-arts expert, determined to help capture the opium dealer whose gang was responsible for the death of his sister. Lee enters a kung fu competition in an attempt to fight his way to the dealer’s headquarters, with the assistance of his friends.

Faceoff movie review: This is a cult movie for martial arts fans. Bruce Lee in another charismatic performance – with great Kung Fu and action scenes.

Chris Dubois (Jean-Claude Van Damme) Is a thief from New York city’s slums during the 1920s. He finds himself on the run from the police. He hides on an outbound freight ship leaving for Asia. Taken in by the mysterious Lord Dobbs (Roger Moore) as the boat entering Thailand, Dubois is introduced to the underground world of martial arts fighters. His training gets to a peak, in a secret battle between the world’s greatest fighters.

Faceoff movie review: This movie is one of the best tournament ones – with great martial arts scenes and a mysterious 1920s atmosphere. ‘The Quest’ is definitely a great option for a movie like ‘Bloodsport.’

A third sequel for the franchise. This time, Case Walker (Michael Jai White), a former martial arts champion, returns to compete and win the championship again.

Faceoff movie review: This movie is all action!  highly recommended for ‘Bloodsport fans.

Léon Gaultier is a foreign legion deserter who arrives in the US, after learning that his brother has been murdered, and his sister-in-law and children are in financial distress. He participates in fights, in order to support them.

Faceoff movie review: In this magnificent action movie, we reveal the top martial artist in movies history Van Damme. His abilities as a dramatic actor with a charismatic appearance. This movie is a gem if you search for martial arts movies like ‘Bloodsport.’

This movie is based on the life story of ​​Huo Yuanjia, a martial art guru who had millions of believers in China. His big dream was to continue the legacy of his father, who was a great and influential warrior. To do so, he must go through a personal journey to live in exile and be born again.

Faceoff movie review: From its first scene, this movie takes you into a mystical journey – with amazing martial art action scenes and landscapes.

A new film from the Marvel cinematic universe. This time with a Chinese superhero who specializes in kung fu and martial arts. There are not too many details about the plot. Shang Qi confronts his past, which he thought he had left behind, as he is drawn into the mysterious web of the ‘Ten Rings,’ a mysterious organization the protagonist tries to join. In the lead role Simo Liu (“Kim’s Grocery”) and alongside him can Awkwafina (“The Farewell”) and Michelle Yeoh (“Surprisingly Rich”). Directed by Destin Daniel Cretton (“Short Range 12”).