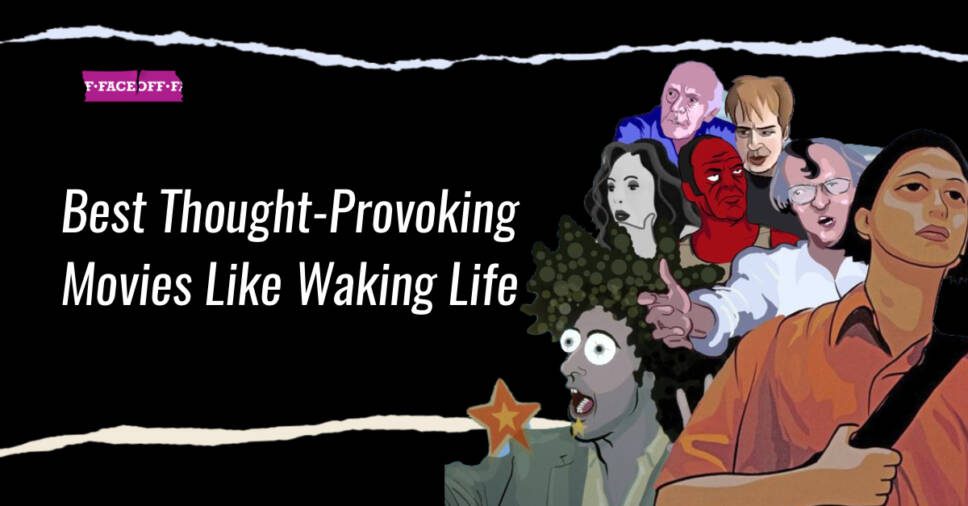 If you love movies like Waking Life with experimental animation and conversations that make you think about the meaning of life, then get ready because we have the perfect titles for you.

Richard Linklater’s film deals with the nature of lucid dreams versus reality and perception. It tells the story of a guy who discovers that he is living a dream, there is no clear space, there is no time, and no limitations. The discourse between the characters raises philosophical discussions about the afterlife – which are like one long dream.

There’s nothing really like Waking Life, yeah it’s one of a kind, but we do have intriguing movies that will draw you in and make you think.

John Oldman (David Lee Smith), is a university professor who is leaving his job and claims to be a Cro-Magnon, a man from the Paleolithic period, who somehow managed to survive more than 14,000 years. He is inviting coworkers for a farewell party, and then at his party, he reveals his unique story, to his friends’ amazement and many questions that arise.

The Man from Earth is such a unique movie, with so many groundbreaking ideas, inspiration, and questions that you ask yourself during it. Interesting storyline, smart and amusing.

Joel Barish (Jim Curry), tries to work so hard on his relationship with Clementine Krusinski (Kate Winslet), but in vain.

Joel’s world is completely destroyed when he discovers one day that Clementine, devastated from their failed relationship, underwent an innovative psychiatric procedure that eventually erased from her brain all of her and Joel’s relationship memories, and was replaced with new ones – which he doesn’t appear.

Frustrated by the fact that he is still in love with a girl who now does not even recognize him, Joel desperately turns to the same psychiatrist and asks to undergo a similar procedure.

It is a magical movie, and the idea is so innovative that one doesn’t want to forget or even delete some memories from his life- but who are we, and how can we define ourselves without our memories? Kate Winslet got an Oscar for this role and the movie won the Oscar for the script as well – after you will watch it you will understand why a beautiful modern classic.

​​Oscar (Nathaniel Brown), a young man trafficking hallucinogenic drugs in Tokyo, is killed by police. After his death, he is contracted from above the life of his stripper sister (Paz De la Huerta), and those around him, all presented from Oscar’s conscious point of view.

Dark and poetic at the same time, giving us a glimpse of the complication of a human mind, a very well-crafted movie.

The Life story and mysterious death of the painter Vincent van Gogh (Robert Gulaczyk), through the pictures he painted and 800 letters he wrote.

When Armand Rolin (Douglas Booth), a son of Van Gogh’s good friend learns that Van Gogh is dead, he sets out to deliver a final letter written by the painter to his brother.

In his journey, Armand meets all the people Vincent has met in the last years of his life, and they shed light on the fascinating story of his life, and help Armand wonder about his mysterious death. Was he murdered? or maybe committed suicide?

Loving Vincent is an artistic and creative movie like Walking Life, you will definitely learn more about the legendary Van Gogh.

Stevo and Bob are two former geeks (Matthew Lillard, Michael Goorjian ), who now turn into punks, move from party to party, have conflicts with Rednecks, and try to deal with relationships, their broken backgrounds, and their plans for the future.

This Indie and very intelligent movie. It deals with nonconformism and asks questions about what is right and what is wrong. Both lead actors are great, the movie was shot in a really unique jumpy way.

She tries her best to lose weight in order to wear her red dress, she uses diet pills until she gets addicted to the pills as well. Marion (Jennifer Connelly), Harry’s girlfriend, who is also a heroin addict, has always been trying to escape from her Patriarch complex, caused by her wealthy father.

Harry himself dreams of doing a huge big drug deal that will improve his status and financial situation and allow him and Marion to open a clothing store.

Requiem for a Dream started the Millennium with a dark downward spiral that turned into a cult movie everyone watched back then, with an amazing cast and even an Oscar nomination for Ellen Burstyn.

The movie follows the lifestyle of young people in Austin, Texas, who are trying to define their identity in the reality of a grim routine, wandering around without purpose and trying to find out what their dreams are if they have any.

By the same director of Waking Life, this experimental movie that turned out to be a cult film, director Richard Linklater cast unknown actors. This movie has its own terms and voice, it is so interesting and unique and it is one of the generation X’s best representatives.

Wallace Shawn (The Princess Bride), and André Gregory (Celebrity), play themselves when they meet for dinner at a restaurant on the Upper West Side, New-york. Gregory, a theater director from New York, is the lighter conversationalist of the two.

He shares with Shawn his thoughts on retiring from everyday life, in favor of a trip around the world and meeting different and weird people. Shawn wonders if Gregory is at all confronted and aware of the practical aspects of life.

This truly genuine movie is full of Intellectual blows and philosophical discussions, humor – and it is really ahead of its time – it is like it predicted the future, with ideas about the press, wealth, and climate change. If you are looking for movies like Walk Of Life for its philosophical questions, you’ll enjoy this old classic

A documentary animated movie follows the experiences of an Israeli veteran soldier during the 80’s Lebanon war – he meets a friend and fellow soldiers and relives all his difficult experiences from the war.

This Oscar nominee animated movie was groundbreaking, it is so delicately crafted, the narrative is so interesting, it is artistic and thrilling, and the fact that history comes to life in an animated way just adds to a bitter aspect of the cruel reality of war.

​​Aline (Alexandra Dahlström), and Agnes (Rebecka Liljeberg), live in Amal, a sleepy Swedish town, one of the most boring places in the world.

Aline, a sixteen-year-old rebellious beauty, is dying for something to happen to her, she has already dated all the boys but has not yet experienced the ultimate excitement.

Agnes, who just moved with her family to Amal, still doesn’t have many friends and she is secretly in love with Aline, but only reveals it to her computer diary.

To get out of her social isolation, Agnes invites the whole class for her birthday. Only Aline and her sister, both extremely bored, arrive at the party and somehow reveal Agnes’ secret.

This film is so realistic, it very similar in how it makes you think about boundaries during adolescence and the aim and need to be part of something and part of the group.

A stick figure named Bill suffers from memory problems and hallucinations. Bill often has meetings with his ex-girlfriend and constantly visits a clinic for his condition. On one of his visits to the clinic, Bill’s doctor recommends that Bill have a new batch of medication, as his recent treatment didn’t bring any positive results.

Don Herzfeldt’s experimental movie takes this human brain memory manipulation to its limit. It is interesting and disturbing at the same time.

Mining astronaut Sam Bell (Sam Rockwell), has been on the moon for three years alone on a space station. Exactly two weeks before his period ends, he begins to hear and see strange things and from that moment, terrible things start to unfold.

Moon is about the loneliness of humans wherever they are solitude and darkness with a little bit of hope as well. Beautiful visuals and  Sam Rockwell doing a wonderful realistic job.

The animated film goes deeper into the world of The Matrix and the people who inhabit it. A tribute by the Waszewski brothers to the Japanese animated film industry and the “Anime” genre in particular.

Animatrix is a series of nine short films, directed by the best directors in the field of computer animation and Japanese animation. A

Accompanied by amazing sound, each film stands on its own and deals with different sides of the Matrix. The Matrix stars, Keanu Reeves and Carrie Ann-Moss dub the characters in some parts of the film series.

A landmark in the history of animation, Fantasia was made in 1940, and it was the first fantasy film. Spectacular animation and breathtaking sights tell the story of the musical pieces.

Conductor Leopold Stokowski seated the Philadelphia Orchestra to play some of the best-known musical classics, and Disney’s animators began to beat their imagination and innovative technicolor of the time.

The Sorcerer’s Apprentice presents Mickey Mouse in an overly ostentatious attempt to prove his magic skills. Rite of Spring was dedicated to the evolution and extinction of dinosaurs. Dance of the Hours is a dance of especially large animals. Night on a Bald Mountain and Eva Maria present dark sides of life, as well as of the animators themselves. Magical at any age and in any re-viewing round.

See also: The 45 Most Famous Wizards Of All Time!