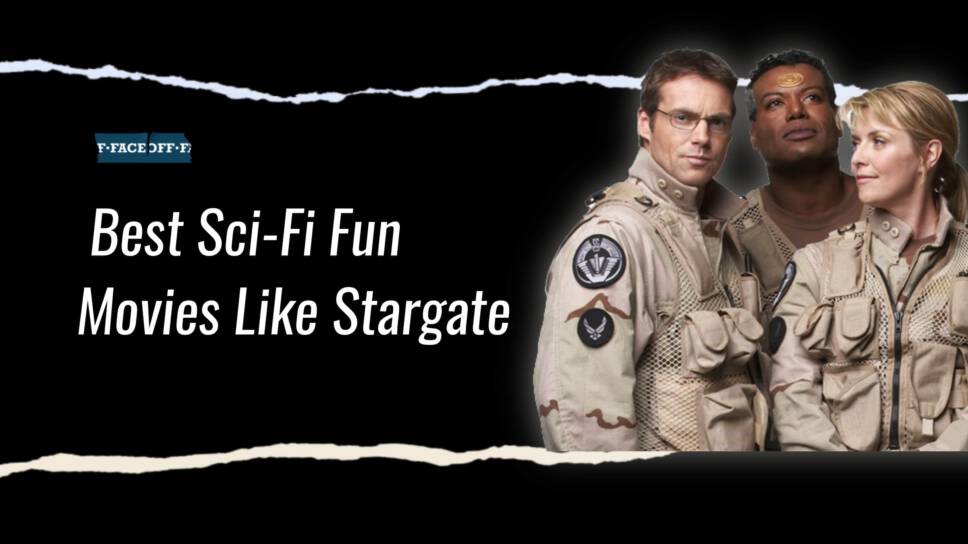 In the futuristic 23rd century,  the world is under the rule of the “United Citizen Federation”, and humans began to expand throughout the cosmos. In their travels, they encountered an insect-like alien race, with which they have a constant conflict. We follow Johnny Rico (Caspar Van Dien), his partner Carmen (Denise Richards), and his good friend, the telepath Karl (Neil Patrick Harris). They decide to become equal citizens while enlisting themselves in the army and battling alien insects.

Rico transforms from a young rookie into a senior officer in the Federation’s army. Carmen becomes a talented space squadron, and Carl becomes a deadly intelligent man who also reads minds. The film accompanies Rico’s journey through the battles with planet Klendathu until he finally faces the most vicious cockroach alien enemy.

Young Neil Patrick Harris gives a beautiful performance along with great action and well-coordinated battles and visual effects. Starship Troopers is a blast movie like Stargate. But, it has more action in it while Stargate is more about the alien culture. Star Troopers is pretty much the opposite of it.

See relevant: Alien vs Starship Troopers: Which Is Better?

John Carter (Taylor Kitsch), an outstanding soldier in the American Civil War, finds himself on Mars, when the planet’s inhabitants suffer from the attacks of the evil Tars Tarkas against Princess Dejah Thoris, Carter is called to Mars in order to save the planet from those attacks. Overall John Carter looks just like Stargate, the gladiator version.

Most sci-fi fans hate it and consider it a B movie, but in my opinion, it’s an excellent movie! Sure it’s really predictable and all the actors are really bad, but there are also sections that are full of silly fun stuff, the aliens and spaceships and war scenes are entertaining.

A futuristic story about a war for the future of humanity, as told from the eyes of a working-class American family (Tom Cruise as the father). Family routines and normal life is interrupted when aliens from another planet invade Earth, using advanced weapons to eliminate everyone who stands in their way.

Directed by Steven Spielberg and based on the best seller from H.G. Wells – this movie is a piece of art – Aliens looks so real, with a lot of action and scary scenes, and Tom Cruise in an outstanding role.

Bill and Ted are two heavy metal high school fans (Keanu Reeves, Alex Winter),  who fail in school after Ted’s father threatens him that if he drops out of school he will be sent to a military school in Alaska – they are trying to succeed on a presentation for their history lesson. In order to do so, they embark on time travel and meet influential leaders and figures from the past.

Bill and Ted became a cult movie, it’s full of galactic fun, and has a similar team dynamic to Stargate.

Abraham Lincoln (Benjamin Walker), the legendary President of the United States and one of the most beloved leaders in American history, the character who was known for her contribution to the end of slavery in America, also engaged in a surprising side activity: war on vampires.

Lincoln started this war since his mother was killed by this supernatural force, and in order to avenge her blood, he was determined to dedicate his life to the war against these creatures and their masters, who also happen to be the ones controlling the black slaves at that time.

At first, it sounds weird…vampires with Abraham Lincoln? But it blended so well, the storyline is brilliant and looks so real that you start to wonder if it really happened. If you are looking for movies like Stargate that blend history with sci-fi-fi and fantasy, this is the film to watch.

A soldier (Tom Cruise) fighting aliens finds himself trapped in a time loop on the last day of a battle, and discovers that he is getting better at his performance – getting back every time to the same point in time and starting all over again.

This film is based on a book by the award-winning author Hiroshi Sakurazaka. It is smart and unique with its repetitiveness – it is shot in a magnificent way, plus great visual effects and a wonderful cast.

In an upcoming dystopian future, humans will be upgraded by using cyber implants that give them improved vision, superhuman strength, and intelligence. The developers of these systems – Hanka Robotics – set up a secret project for the development of an artificial body that integrates a real human brain, as opposed to artificial intelligence.

Mira Killian (Scarlett Johansson) – the only survivor of a cyber-terror attack that caused her parents’ deaths – is chosen as the subject of the research. Cutter (Peter Ferdinando), the CEO of Hanka Robotics, decides to use Killian as an assassin in the war against terror despite protests from Killian’s developer.

Ghost In The Shell will definitely make you think about the ongoing relationship between us human beings and technology in that aspect it shares similar vibes. It is a smart movie and Scarlett Johansson is as amazing as always.

Steve Rogers (Chris Evans), was a student in the 1940s before the United States joined World War II. After unsuccessfully trying to be accepted into the U.S. military, he was offered to be a military guinea pig in a project called “Rebirth” – a top-secret research project aimed at producing super-soldiers.

The experiment was successful and his physiology changed – he even acquired telekinesis power with which he can control his shield. It’s a superhero movie that integrates action and sci-fi but also romance.

Except for the great visual effects, the cast is doing wonderful work – not only for sci-fi fans!

In the distant future, Duke Leto Atreides (Jürgen Prochnow), and his family are sent by the emperor to a world of sand called “Dune“. This world is the only world in the known galaxy that has the most important and precious element and source in the entire universe – Melange. When the emperor asks to kill the Duke and his family, the Duke’s son, Paul Atreides (Kyle MacLachlan), manages to escape and lives with the peasants. Paul discovers the mysterious secret behind Dune and reveals his fate – to free Dune from the emperor’s cruel regime.

Based on the famous book by Frank Herbert, It was a must-see movie in 1984, Sting in a once-in-a-lifetime performance along with a great cast and smart storyline.

​​An expedition of archeology students arrives at an excavation site in France, led by Professor Edward Johnston (Billy Connolly). They reveal the remains of a castle from the Middle Ages, with a basement that was locked for centuries, in which they find a special mirror and next to it a letter written by Professor Johnston from the past. When the professor disappears, they discover a rift in time that leads them to the 14th century. Now, in order to save him and themselves, they are forced not only to dig up history but to relive it just as it was in the past. Leading the search is Chris Johnston (Late Paul Walker), the son of the lost professor. Timeline is all about alternate timelines, it is like a quest for the audience, a real mystery, and time travel.

In a futuristic world, where genetic engineering has become commonplace and has pushed “ordinary” people to the margins, Vincent (Ethan Hawke), is a young man with a congenital malformation who struggles to join NASA as an astronaut.

The film’s preoccupation with genetic engineering does not slip into didactics, and never comes at the expense of other things, like the plot for example. In other areas, too, Gattaca does not fail: it is amazing and original in terms of design and photography and Michael Neiman’s soundtrack is also brilliant.

George Taylor (Charleston Heston), is an astronaut who makes an emergency landing with his spacecraft, on a planet that is inhabited by intelligent apes with the ability to speak. He is imprisoned in their colony, and considered an animal – he is the savage and the animals are the advanced inhabitants of that planet. He is aided by a female ape and plans his escape.

A Post Apocalyptic Sci-Fi classic – with a surprising legendary end! visual effects were so groundbreaking at the time.