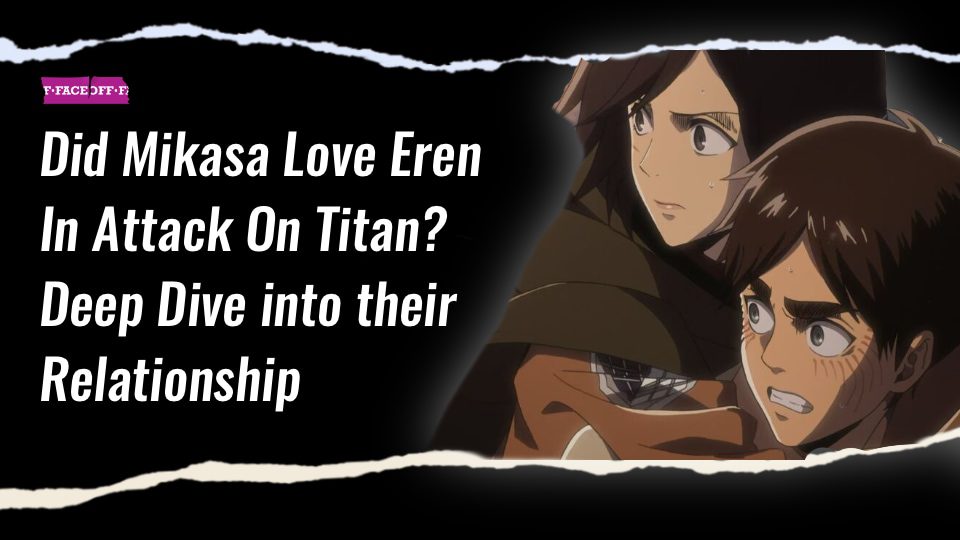 Attack On Titan is the last thing we expect from the Shounen dark fantasy. AOT is filled with gore, blood, and people dying left and right, war and romance just don’t get along. Still, fans often ship Mikasa and Eren together.

Now that the manga has ended and the final season is right around the corner, we can finally answer the question of did Mikasa loved Eren? Let’s examine their complicated relationship.

Is Mikasa and Eren’s relationship a brother/sister one?

If Mikasa actually thought about Eren as her brother, then she has no reason to blush when she sees the hot bad boy or remind him of that scarf he once gave her. She still cherishes that scarf to this day (Yes, Mikasa is the cutest girl ever Eren!).

Some people might disagree with the fact that Mikasa only sees Eren as a brother. But, in no way do they see each other as step-brother and step-sister. They were two orphans who knew what they had lost and wanted to protect each other till the very end.

In a manga character interview, Eren was asked what type of girl he was into. Eren was confused and brought up a couple of names. The first was the curvy girl Annie, but he did mention that Annie was more like his rival for competition.

Then came the blond sexy hot girl Historia, but he never had a thoughtful conversation with her. Then he was asked about Mikasa, Potato girl, and others. He simply replied that all of them had their own features that made them shine. But, he saw none of them as a love interests.

This may disappoint many fans but Eren, up until this point, was like many typical Shonen protagonists. It is not like he does not like Mikasa, it is just that these feelings never crossed his mind because of his end goal.

Eren was more like Hanji, who is super obsessed with Titans. But, Eren’s obsession was with eradicating all the Titans during that moment. After Mikasa confessed her feelings to Eren, we do see him slowly seeing Mikasa as a love interest but he never showed his feelings to her.

Did Mikasa Love Eren In Attack On Titan?

To answer this question in one word, The answer is YES! Mikasa loved Eren. At the end of Attack On Titan season 2, the anime gave us an amazing moment. Mikasa confesses her feelings toward Eren in her own way.

If you notice all the visual clues, that moment when everything seemed doomed, and with no help coming their way, Mikasa was blushing when she was about to go for a final kiss to confess her feelings during their final moments.

10 times Eren showed that he cared about Mikasa

Eren Protected Mikasa from the Kidnappers

During their childhood, Eren protected Mikasa from the kidnappers while risking his life in the process. He stabbed one of the kidnappers and charged at the other with a makeshift spear. At that moment Mikasa thought of Eren as someone she could trust and protect. This was the moment when Mikasa’s feelings first started to flourish.

Mikasa still cherished that moment when she was cold and Eren gave her his scarf. They were too young to even know what love is. But, this moment sowed the seeds into Mikasa’s heart, and she realized that Eren deeply cared about her. It also showed that he would later on become a love interest.

Eren protected Mikasa in his Titan form during his first transformation

When Eren first revealed his skills in Attack Titan form, he could not control his powers and was attacking anyone that came close to him. He went on a rampage and killed every Titan, eventually saving Mikasa. This was a subconscious decision and this made Mikasa care about Eren even more.

Eren took a cannon shot to save Mikasa

After Eren woke up, the military saw his powers as a threat and wanted to get rid of him. They shot a cannonball at Mikasa, Eren, and Armin. Eren quickly transformed into his Titan form and took that shot, saving both Mikasa and Armin. This scene really showed that Eren deeply cared about Mikasa.

He told Mikasa that he was willing to wrap his scarf around her neck as many times as she needed. This scene was proof that Mikasa was always the girl Eren cared about most.

Eren was ready to sacrifice everything to protect Mikasa

After Eren was locked in a cell and brutally beat up by Levi, the military was also going to look into Mikasa and Armin as potential threats to the country. That’s when Eren was willing to sacrifice it all to become a weapon for his country and save his friends.

He did not want to ruin Mikasa’s life because of him. Often time he painted himself as the villain just to save Mikasa from military repercussions.

Eren wanted to be the one to protect Mikasa

During their childhood, Mikasa protected Eren many times. She was obviously stronger than him in every possible way.

This often irritated Eren and damaged his ego, as he wanted to be the one to protect Mikasa. To that end, he trained hard to reach Mikasa’s level, so they could fight side by side instead of Eren always being the one being saved.

This might sound a bit childish, but, after his transformation, Eren really showed that he had come a long way and he was no longer a damsel in distress.

Eren was disappointed when his friends interrupted their moment

During their journey across the sea to Marley, Eren, and Mikasa had a moment alone with themselves. Eren finally took the courage and asked Mikasa what she thought of him from a relationship perspective. Mikasa gave him the “I love you like a bro” trope, and said they are family.

But her full answer was cut short because their friends interrupted the conversation. This left a bad taste in Eren’s mouth. He was hoping this would be the time they confessed their love to each other.

This moment also signifies that Eren was never the aggressor in this relationship. He never intended to take the first move. Still, this was the moment when Eren tried to express himself. That means that Eren was starting to see Mikasa as a potential love interest.

Eren asked Mikasa to forget about him after his death

Eren at some point in the story realized that this power is slowly eating him away and he is going to vanish leaving Mikasa alone to die old. For that exact reason, Eren wanted Mikasa to promise to forget about him after his death.

He wanted her to move on and live a happy life, have her own kids and find love. That proved that Eren, deep down, loved Mikasa. Hell, he is willing to let her go just to see her happy.

While throughout the anime and the manga Eren constantly pushed Mikasa away from him, during his final battle with Armin, he admitted to having feelings for Mikasa and said he wanted to be with her.

He wanted Mikasa to only think about him and no other man. Eren broke down crying in front of Armin while confessing his love for Mikasa. This was the strongest example that Eren was definitely in love with Mikasa.

He was just conflicted with his feelings about following his heart or doing what was right for the country. He lived by the rules of the military for so long that he never got to follow his heart. If his life was truly his, I would assume he would confess to Mikasa in a heartbeat. No doubt, they would live happily ever after. But that was never going to happen.

This ship was about to sink as the manga was coming to the end.

Did Mikasa and Erem end up being together?

The ship was never going to sail because the Mangaka never intended it to sail. However, AOT kept that juicy apple dangling above us fans, making us think that this series might end up with Mikasa and Eren being together. But AOT pulled out its prank card and flushed the Mikasa x Eren ship down the drain.

When the final chapter of the manga was released fans were speculating that the dark anime was going to have a bitter ending. Eren was going crazy and wanted to create his own world full of Titans. He made himself the villain just to end it all himself. However, It was Mikas who saved Erens from the Founding Titan. It had to be Mikasa! That scene disappointed the majority of the fans. Humanity won and Titans lost, that was it!

Did Mikasa Love Eren In Attack On Titan? Verdict

In conclusion, what is my verdict? Did Mikasa love Eren? Did Eren Love Mikasa? Both answers are yes. They both loved each other and wanted to be with each other. However, the state of war between humans and Titans never made it possible for their love to flourish.