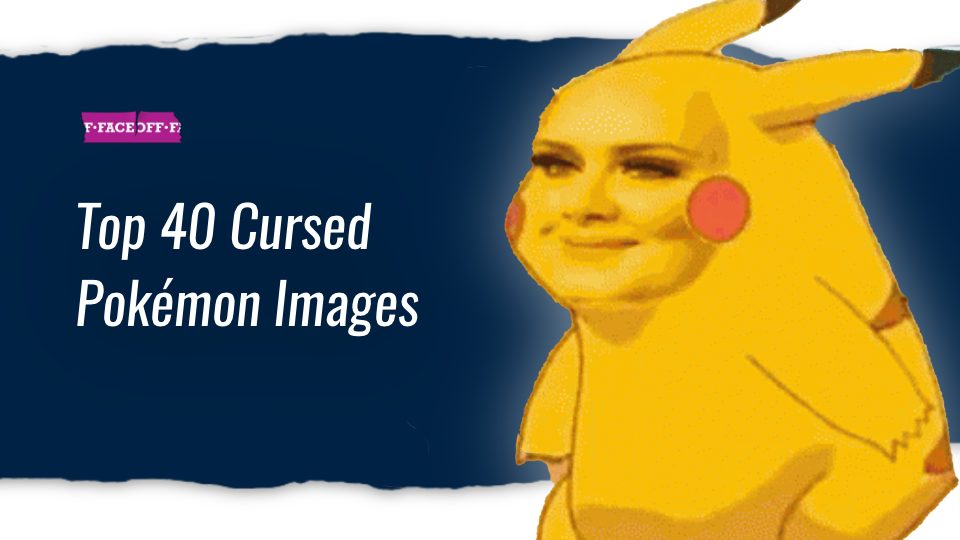 Around the globe, millions of people love Pokémon for all the right reasons. It excites both kids and adults. If you are a diehard fan of the Pokémon series, here is the list of forty cursed Pokémon images that you will regret viewing. These images will surely make you laugh, but you will also wonder if you have spent a long time watching the Pokémon anime series. So, are you ready for this viewing these cursed images?

This cursed Pokémon image looks cursed from the core as it features a black-colored Pikachu.

The cursed Steve is a card that will be remembered for its ugliness. It is cursed from top to bottom.

At first, it appears that nothing is wrong with this cursed pokémon image, but the green-colored Meowth makes the team rocket cursed.

This image shows Pokémon toys that have weird appearances, like swapped faces or enlarged facial features.

If your day wasn’t bad enough, this cursed Pokémon image would surely make it because who opens the mouth of a small creature this wide?

For fans of Pokémon, even the smallest details matter, and buying a toy with the wrong eye color will be a serious offense.

Pikachu is a small character in Pokémon, but these soft toys really make things cursed and weird.

Would you imagine a dead Pikachu? No, then this image is the complete opposite because it looks like the Pikachu has been dead for days.

Pikachu costumes look cool, but this costume became a curse for Pokémon fans who viewed the image. Everything from costume to pose is wrong here, and it doesn’t match the theme of the show.

This image is based on the imagination of a Pokémon lover who also loved the Big Chungus. Don’t you like the idea of Big Chungus in Pokémon because it can easily defeat everyone else with its immense power?

See also: Top 30 Most Useful Fish Pokémon You Need To Know About

The milk tank in Pokémon is feeding the Meowth, and this looks bizarre from every possible thought. To add up to the cursed image, there are two purple characters with weird smiles on their faces.

Charizard was known to be a powerful and fierce dragon, but this image ruined his reputation once and for all. Now, he has a big smile on his face, like he is welcoming guests to his house party. The Pokémon community is like the fierce side of Charizard.

A green character in Pokémon allows you to put the face of Shrek on its face. The creator has done a good job of blending both images, but it is weird. This image is a hilarious creation from a cursed mind but doesn’t view it for too long, or you will become blind.

Eevee is a small Pokémon spice that was ruined by the weird imagination of a Pokémon fan, I think. Don’t take even a sneak peek at this image because it will be stored in some part of your brain and haunt you for the rest of your life.

Oh my God! Why is it that these evil image creators love to ruin the sweet little Eevee all the time? This time, the Eevee is standing with a mouth opened wide. It is opened so wide that you can clearly see all the teeth and the back of the tongue.

I Understand Shrek is a popular character, but that doesn’t give license to any cursed image creator to put its face on the body of Pokémon characters. Sadly, this time, the body of an ape is used for this sin. Moreover, the face isn’t blended perfectly with the body of the Pokémon to make things worse.

Well, Gentlemen, finally it’s Wednesday, no? then who did this cursed image of a human frog on a Pokémon card? It is an Amazon box that looks just like a frog because someone has hidden their head inside the box while keeping their hands and legs outside to make up the body of a frog.

Have you been collecting Pokémon cards since childhood? If your collection of cards isn’t big enough, this one cursed card will surely add up to it but beware because it is a cursed card. This card is even more cursed than the most cursed of Pokémon stuff because of those means eyes.

This time, Pikachu is on a trip to Hollywood, but his face is sadly swapped there with a Hollywood biggie. Surely, both Hollywood and Pikachu look great separately, but whose evil mind generated this idea of blending the face on the body of the Pikachu?

20. Your Uber Has Arrived

Did you book a ride on Uber? If yes, then sadly, the ride is here, but it isn’t your usual Uber ride. Have you seen it? How do you feel about it? Sad, just like most other Pokémon lovers. I mean, was it necessary to turn Ash Ketchum into a dog-like weird creature?

Like it or not, millions of Americans love Trump, and this image was first considered a gift for them until its true face was revealed. Moreover, the shape of the character where the hair of Trump is pasted is a sphere with small legs and hands, adding up to the weirdness and cursedness of the image.

A person in a big Pikachu suit is touching the bald head of a cosplayer in a Saitama costume. As soon as you look at the image, you will be fierce, just like Saitama himself in this image. Was it necessary to take an image of this scene and then share it on the internet to ruin Pokémon lovers’ day?

After viewing this image, you will surely want to get shot by this weird Pikachu because there is nothing else left to see in this vast world. It uses the face of a fat guy, a red cap, a pistol in one hand, a big knife in the other hand, and joker shoes. All of this weird stuff is pasted on the body of poor Pikachu.

If there was one cursed Pokémon image where all the weirdness of the whole world could be collected, this is the one. For anime girls and boys, getting the content of this image out of their heads is impossible except if they opt to die instead.

Face-swapping is cool, but this depends on the scenario and characters. If you swap the face of a dragon with the face of a human character from Pokémon, what would you expect other than this shitty image?

26. Good Morning To All Except The Person Who Created This

If a question arises in your mind why Pikachu was made small, this image is the answer to your question because the height of Pikachu is increased, and now it’s a disaster.

27. Ash Ketchum Is Scaring Us All

Ash Ketchum looks like a very sweet Pokémon character, but now he is trying to scare his diehard fans. This cursed Pokémon image features Ask Ketchum with his mouth open. He opened his mouth to the extent where we could see his throat.

After this cameo of Sponge bob in the Pokémon world, it is time for many Pokémon fans to say goodbye to this evil world where creators can ruin a good image. Beware of sharing this picture with your friends because this will end your friendship. Those big and weird eyes of sponge bob on the head of a Pokémon character were a little too much.

Gyarados is a Pokémon who is always angry for no apparent reason, and this may be the reason why no one ever notices his small and weird feet. Now that some over-enthusiast has done it, you can undo what you have seen and have to live with this cursed image in your mind till eternity.

30. Gyarados With Its Mouth Closed

We are talking about Gyarados, so how could we forget this cursed pokemon image where his mouth is closed? No matter where you see Gyarados in Pokémon, his mouth will always be opened but not anymore. We first thought that it would be a good idea to look at this image, but it immediately turned out to be a bad decision with a lot of regrets.

Are fish high on a substance? No, this was yet another cursed creation by some toy maker who had other plans, but everything went in the wrong direction. This soft toy shows that maybe the big fish is feeling sleepy, but whatever it is, there are other ways to portray this.

Alas, it is Ash Ketchum from the Pokémon in the hands of cursed toy creators. They have done a pretty nasty job by making him bald with a few hairs on his forehead. It looks like the baldness is due to age, but in the original series, Ash is a young boy who loves to catch Pokémon.

Want to ignore this card with a weird face? I don’t think you can, and this is the exact reason why it was added to this list. It will surely give you a cringy feeling, and you will be cursed till your life ends. It is a pencil drawing of what looks like a girl or god knows what.

Crobat features a hand of a person who is holding a weird little creature. If you look clearly, you will learn that it’s a small bat which makes the situation even worse. Why in the world would you hold a bat in your hands and take an image? Then use the image on a Pokémon card. This is enough cursedness for today.

Imagine the birthday of your little one, and he or she is a fan of that little yellow character from the Pokémon series called Pikachu. To surprise the birthday boy or girl, you place an order for a cake with a small Pikachu on it and receive this instead. Well, it is a Pikachu, but it will scare kids.

36. Yet, Another Cursed Pokémon Cake

Okay, this will be the last cake in this list of cursed Pokémon images, but it will defeat all the other images. Bakers are trying to make a cake of Pikachu, but it turns into something else. Something is being inserted inside the little Pikachu while he is screaming, which is both hilarious and weird.

Is that a Pikachu or a cat? From its looks, it is a Pikacat or something in between. There is nothing wrong with the Pikacat except for the creepy smile on his face.

In the cartoon world, the little dragon with a fiery tale looks good even with those missing teeth, but someone created a more realistic model, which didn’t go well at all.

As the title suggests, this image ruined the yellow-colored Pikachu from Pokémon but turning him into a five-hundred-pound giant. The only thing that Pikachu needs now is a gym and a trainer, or he won’t be able to continue as a companion of Ash.

For the second, some evil person booked a Uber, and this time, it is a four-legged girl. She has a cute face and big eyes. At first, you won’t understand where are her legs and hands joined to her body, but there is much more to worry about than this small detail.