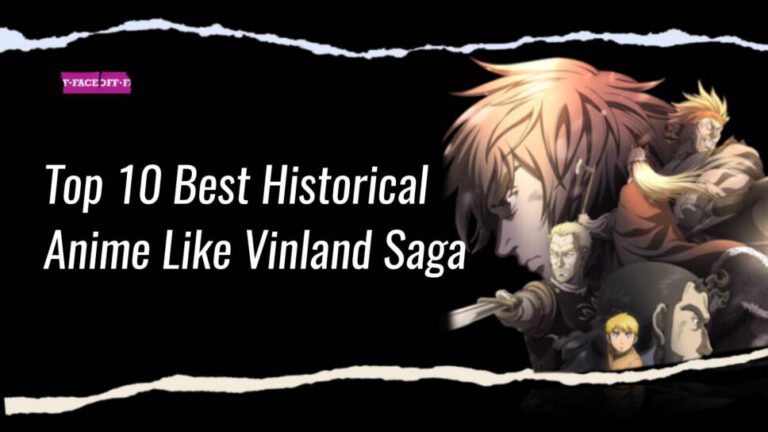 To start us off, we have Yasuke, a Japanese-American Netflix anime based on the history of 16th-century Japan during the reign of Oda Nobunaga. It’s not the perfect enactment of historical values as it takes place in an alternate timeline where feudal Japan had magic and mecha in its arsenal.

The story focuses on Oda Nobunaga’s right-hand man, an African warrior named Yasuke. Throughout the series we see Yasuke trying to prove himself against the brutal society of Japan and how they won’t accept a man of a different color as their own.

The story is decent, and the action is quite phenomenal but I would have liked it better if they would have stuck to showing us actual samurai showdowns instead of mecha battles. The anime is like Vinland Saga, in the sense that it has its own epic battles that are quite similar.

9/10. Mugen no Juunin: Immortal (Blade of the Immortal)

One of the more underrated anime that showcases the amazing Edo period of Japan is Blade of Immortal.

The anime follows Manji, also known as the “Hundred-man killer”. You can probably guess why he is called that, there is a much more frightening fact about him despite his notorious reputation. He is immortal and just like every immortal being, he thinks this power is a curse and desperately wants to get rid of it.

Blade of the Immortal is very slow-paced at times but it stuck to the historical anime theme and is a very good choice for an anime like Vinland Saga. Check it out if you are into cool samurai showdowns with a bit of drama.

When we talk about historical anime, Castlevania is not something anyone would mention. But The show is based on Dracula and we all know that whenever there is Dracula involved, the story is going to be amazing.

Castlevania is a Netflix original action-adventure anime that is loosely based on the Castlevania game series but the story has its own originality and does not follow the game plot. The anime features Trevor Belmont as the main character on a mission to stop the evil vampire Dracula Tepes and save humanity.

Castlevania has really awed its audience with its amazing quality animation and visuals as well as it is over the top fight simulations. When it comes to the story and revenge plot, Castlevania won’t disappoint you. It is action-packed with epic fight scenes.

Let’s first agree on something, nobody likes goblins, right? Unless it is on a certain slime anime we all know about. But when it comes to Goblin Slayer, the word revenge just does not cut it.

After witnessing the brutal murder and abuse of his sister, our main character took it upon himself to eradicate the existence of goblins.

Goblins are well known for their ferocity, cunning, and rapid reproduction but what most people don’t see is that goblins are evolving. Only our Goblin slayer notices these slight changes and realizes, that these goblins are learning from their experiences and becoming better at killing adventurers.

Even when everyone thinks he is crazy for seeing goblins as a potential threat, our MC fights on alone in the dark fighting goblins, soaked in goblin blood.

Goblin Slayer is a very brutal and very bone-chilling anime like Vinland Saga.

Here is a super underrated anime I am pretty sure not many of you know existed unless you did a deep dive in the historical war anime rabbit hole.

But before jumping into the synopsis, are you in the mood for some war? If you are, then Kingdom is the anime for you.

Kingdom takes place in the historical Chinese glory era when they lead for 500 years. Their people saw many kingdoms rise and fall only to make room for the next king.

Our story focuses on Li Xing, a war-orphaned slave that trains day and night to become a great general. However, his story goes south quickly when his best friend comes to him in a bloodied state.

That’s when he decides to take matters into his own hands and work for the king. The story and action are very gory, so I bet you Vinland Saga fans are going to have a blast with this one.

The story focuses on Chise Hatori, a young beautiful girl with red hair who was abandoned and sold in an auction. Thinking her whole life that she was unwanted, Chise finally found a place called home when a mysterious sorcerer bought her and gave her a loving home.

The anime has its ups and downs but we get to see Chise adjusting to this new world she never knew about and learning magic. The show also has its fair share of fights so, you definitely won’t be bored.

Imagine you were living a luxurious life and one day everything vanished just like Thanos snapped his fingers. Yona of the Dawn focuses on the life of princess Yona who lived most of her life in the luxury of the King. She was completely sheltered from the responsibilities and problems of the world, making her very useless when it came to practical life.

But the Princess’s luxurious lifestyle quickly came to an end when one night the kingdom was attacked and the palace was not safe anymore.

She had to run away with her bodyguard Hak, who is also her childhood friend. Hak quickly broke the news to her and told her how the real world actually works. Now Princess Yona is a rebel trying to gain back her kingdom that was taken from her during the war.

One of the best revenge plots that blew up on the internet when it was first released. Unless you have been living under a rock, you definitely have heard of Dororo.

Our main character is Dororo and he is a young man who had been cursed by the twelve demons of the underworld when Dororo’s father or should I say the Lord at the time made a deal with the devil to save his land and people. But Dororo was trapped and left to die. But luckily a doctor nurtured him and became a father figure to him, and raised him as his own.

You see, Dororo was a boy that was born with no eyes, no skin, no arms or legs. It was his curse that the demons took away. Now Dororo is in it for revenge as his original family is living a luxurious life while he is struggling to survive.

The anime is very action-packed but has very few voice lines. But it is still a very enjoyable show that focuses on Japan’s history. Hopefully, Dororo will one day be renewed for a second season soon!

What would happen if humanity lived inside walls like a caged bird its whole life until a giant monster breaks the wall bringing chaos inside the walls.

Attack on Titan has the exact shounen plot, just like Vinland Saga, where humanity has never seen the outside world because of their fear of Titans, giant monsters that feed on human flesh. The humans always thought their walls were safe but one day a Titan breaks the wall and destroys the city.

During that rampage Eren witnesses, his mother getting eaten by one of the Titans. That day, Eren decided to join the survey corps to fight against these Titans and find out where they come from. The plot is very revenge-driven but the action scenes always give goosebumps.

I saved the best for last of course. How could we not include Berserk, in a list like this?

After the passing away of its creator Kentaro Miura, Berserk might never get the ending it was going to and will forever stay an unfinished masterpiece in our hearts.

The plot centers around Guts, a young man who was born and raised in a harsh environment. He needs to keep fighting for his survival. Through his willpower and intense training, Guts becomes a famous swordsman that gets recruited into the famous mercenary group led by Griffith. Thinking he finally found a place called home, Guts followed Griffith to the ends of the world only to get backstabbed and now demons from the underworld come every night chasing him till his day’s end.

The story is really mind-blowing and the fights are very well choreographed. I would definitely urge you to read the manga as it is far more detailed than the anime. But the story is very similar to the Vinland Saga as it is a story of revenge.

In conclusion, all these anime we showcased today are all good and unique in their own way. They all have their own unique plot and features that highlight the show. So do check them out if you are into historical anime like Vinland Saga or you’re a fan of action anime in general.