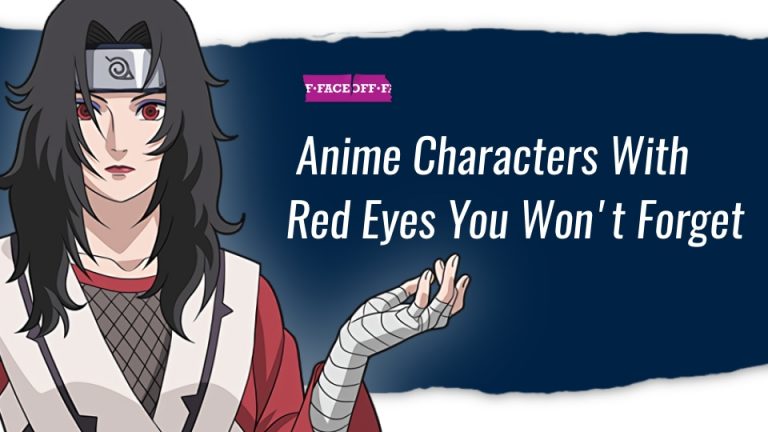 Anime characters with red eyes spell bad things, usually associated with blood or death, and most of the time the red-eye characters are cold, out for revenge, or “out for blood”. Red is a color that has gained negative connotations with demonic characteristics, strong-willed, and can give confidence to those who are shy or lacking in willpower.

Here’s a list of characters who you will not forget!

Kurenai Yuhi’s red eyes are just a part of her character. She is the leader of Team 8 and a talented female elite ninja. Many characters in the series have a defining characteristic, red eyes are a distinctive trait in the Yūhi family. She inherited her red eyes from her father, Shinku. Kurenai has two different shades of red and an additional ring in them. She is a caring woman and a brave warrior, many consider her the “big sister” type, the go-to Genjutsu master of the village. Eventually, she settled down and become a full-time mother, she quit the ninja business putting her daughter first.

Rory Mercury from Gate is s a demi-goddess. On her 1000th birthday, she will ascend and become a full goddess. Her red eyes are an apostle for the Emroy, the patron god of death, madness, war, and battle. As such she has demigod powers, she has no second thoughts about using her gigantic halberd on anyone who dares to insult the Emroy. That is why she is known as “Rory the Reaper”. Rory is a misunderstood character, she is often described as childish, nothing more than fan service. But in many ways, Rory is a character who does morally gray things but can be still considered a hero with morals. red eyes show her violent nature.

Enju Aihara from Black Bullet is a 10-year-old girl born with the Gastrea virus in her blood which gives her superhuman abilities. She has red eyes when she uses her powers. Although her red eyes can be quite intimidating, Enju has an adorable rabbit theme in her character. Her classmates and teachers distrust her because they found out she is a “Cursed Child”, however, she feels that there is a good side to humanity and hopes they can accept her kind. Enju e is not easily swayed by any form of evil manipulation. She’s probably one of the most optimistic characters in a very dark anime and is able to cope with tragedies around her easily.

See also: 30 Cute Anime Girls That Will Drown You In Sugar

A very cute female character, Yameko’s red eyes are scary when her lust for gambling kicks in. You can feel the tension and adrenaline in the air in every move made in each of the games in which she participates. The passion in the series is conveyed mainly through Yumko’s character who never stops jumping on casual bets and putting herself in extremely dangerous situations, all for the thrill. Yumeko makes sure that she will never get bored even for a moment, and she does this successfully for 12 super fun episodes.

5. Kurumi Tokisaki from Date a Live

Kurumi is a brutal Spirit. She’s an incredible character and very difficult to understand at first. Kurumi’s right eye is red, and her left is bright yellow covered by her bangs. Her red eye blends well with her sadistic nature. Kurumi possesses the ability to absorb other people’s time to refill hers and gain more powers. She uses a red barrier she calls “City of Devouring Time”, the clock in her eye shows how much life force she currently has. Kurumi leaves trails of red blood with over 10,000 kills. Unlike the other spirits, she is very aware of her psychotic actions, she doesn’t see eye to eye with her fellow spirits and is the most dangerous one, killing is her life’s purpose.

Muzan is a character that displays exceptional intelligence, charming charisma, and capacity for violence. Having red eyes is expected from a demon, but he started out as a frail boy who had been told that he would not live to the age of twenty years old. A doctor gave him a cure that made him immortal. Muzan exploits people at their lowest to become demons, twisting their emotional trauma so that they serve him. He is the first, and evilest of the demons. It is very easy to get on his evil side, his arrogance makes him dangerous, and anything that can set his murderous side.

Kaname Kuran is a complicated character with dead red Eyes. He is an enigmatic and distant vampire. He is on his own side and doesn’t care what methods are used to accomplish his goals. He has red eyes and is brown-haired, but his eyes turn red only when he has his pure-blood vampire powers on. This is a character that loves plotting, as does every “Pureblood” in the series. It doesn’t matter if it is for a real purpose or because he is a bored vampire. He doesn’t restrain from using both a manipulative and a heavy-handed approach to reach his goals. He might come across as rather selfish but he a very protective and kind, he does his best to protect humanity and the vampire race.

See also: 21 Anime Like Owari no Seraph You Need To Watch

8. Mei Misaki from Another

Mei’s red eyes may be misleading. She is a fairly small character in size, being one of the smallest girls in her class. She is quiet and mysterious. Mei covers her prosthetic left eye with an eyepatch, she lost her eye to cancer when she was four. Her mother, who is a doll maker, made her a glass eye to fill her empty socket. Her artificial eye is green, in contrast to her right eye which is red. Her red eyes make her look sinister at first but she’s actually quite nice. She comes across as an emotionless and distant character but she’s actually a kind and very smart girl.

Shalltear oozes with passion, she has pale shiny skin, seductive crimson-red eyes, and fine facial features. She is a curious character who shows interest in many oddities. She can come across as a little off. Her arrogance makes it difficult to like her as a person, she is usually feared or grudgingly respected. But that doesn’t stop her from getting lovey-dovey around her boss. She is depraved and evil and has the ability to re-animate the dead, turning them into vampire/zombie slaves. Shalltear wears a red-colored full plate armor that appears drenched in blood. Her bloody red eyes indicate her vicious, bloodthirsty character.

Soul’s red eyes highlight that he Is a supernatural being, he is a cool character that has the attitude and wardrobe to show for it. Because of his naturally red eyes and drip appearance, he can give off one hell of a calm murderous impression. He may seem calm, and a guy who is always in control. But Evans can get frustrated, often bursting out into nosebleeds at the sight of Blair. Soul is a talented pianist, a top fighter, and a good combat strategist, and is widely considered to be one of the most skilled weapons on the Academy’s campus. The black blood makes him physically stronger but deteriorates his mental state.

A crimson demon, a race that is characterized by red eyes, she is naturally gifted as a magician. She was a child genius, at the age of five she solved the puzzle of sealing the evil god Wolbach in seconds, so she really hates being treated like a loli character. Megumin is devoted to her favorite Kazuma and explosion magic. She will fire her explosive spells as soon as she’s provoked or praised. She loves to show off her tremendous powers. However, immediately after using it, the magical power runs out, and she can use it only once a day. Megumin is a character that has undergone the most changes during the series. She wears a fashionably meaningful eyepatch on her left eye.

12. Mahiro Fuwa from Zetsuen No Tempest

Mahiro is overconfident, selfish and a self-centered character. On the other hand, he is a good guy at the root. Since he dislikes being seen as such a “good person”, he is often sarcastic and malicious. He is on a mission to find his family’s killer. Mahiro is an attractive young man with blonde hair and red eyes, although. He was a bit of a celebrity in his hometown because of his flamboyant appearance, but because of that, he was often involved in delinquent because he had a grudge against Yoshino, and they had daily quarrels.

Akame is a beautiful red-eyed character who is a member of the assassin group “Night Raid”. During her childhood, she was sold to the empire along with his younger sister, and was raised as a female assassin at a training institution in the capital. She did her job as instructed by the Imperial City, but as she completed her work, she gradually learned about the darkness of the empire and decided to defect. She tried to get her sister to join her but ended up having no choice but to fight her. She has a hobby of making paper crafts of ships, and dreams of building a real ship and going on a voyage with her friends after the battle with the Empire is over.

The Iron Dragon slayer looks very frightening with his red eyes, he likes to love iron and dislikes hunger. Gajeel’s mgic deals with the manipulation of iron, that’s why his eyes are red as fire. Redfox was once part of a rival guild called Phantom Lord but once it was destroyed he joined the Fairy Tail guild. He possesses a large appetite for all things metallic and no-holds-barred combat. He was really lonely character, but as he develops, he finally has a home to return to. Gajeel was previously an S-class mage for Phantom Lord. He activated his dragon force while battling Bloodman to protect Levy.

As the eldest son, he has a strong sense of responsibility, is very kind-hearted, and is serious and lively. He is a trusted and loved character with red eyes, even after becoming a demon-hunting swordsman, his kindness hasn’t changed. He wields a sword, but does not take life lightly, he doesn’t want to be seen as an ugly monster, a demon. Tanjiro is serious and strong-willed, he is stubborn and inflexible, and if there is something he is not satisfied with, he will repel anyone, and will never back down. He has reddish hair and eyes and was born into a family that works with fire, he also has a large red bruise on his left forehead. 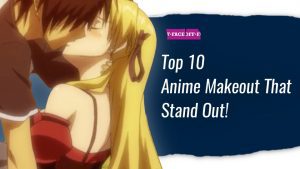 Top 10 Anime Makeout That Stand Out