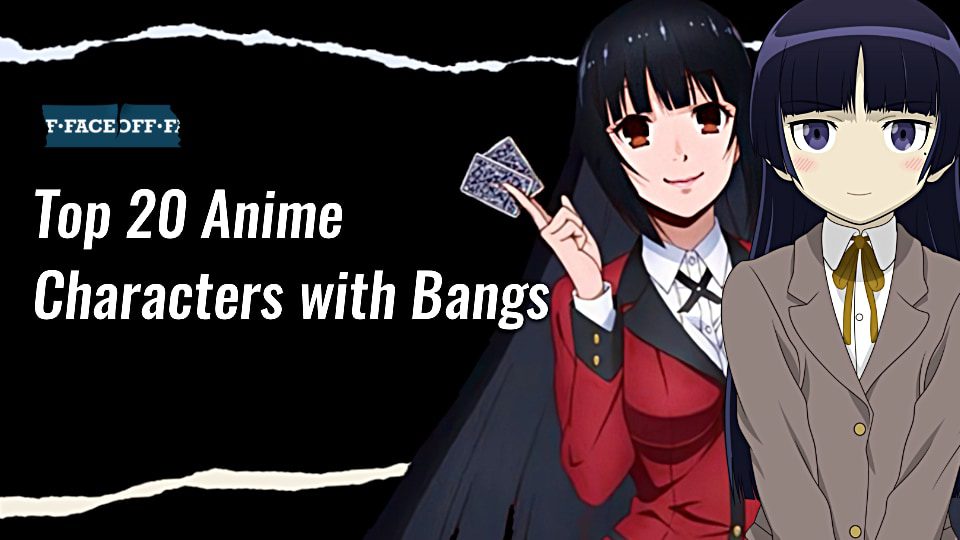 Anime Characters With Bangs come in all shapes and forms. Some female characters have short black hair and side bangs, others with long brown hairstyles with front bangs. Different hairstyles make it easy to remember various characters. It usually shows a character’s personality and adventurous and daring style.

There are plenty of attractive designs of anime ladies with bangs to choose from, that’s for sure. But, however you like your hairstyles, this list that I’ll be sharing includes some of the best anime characters with great hair bangs.

Bangs, or a fringe, are strands of hair that fall over the scalp’s front hairline to cover the forehead, usually just above the eyebrows, though can range in various lengths

Mio is probably the cutest anime character on this list. She is a shy and insecure bass guitar player, just don’t surprise her, because she gets scared quite easily. She looks adorable in her traditional school uniform. She has straight long black hair with front bangs and gray-blue eyes.

The hot sexy girl from the Fairy Tail anime series. Bisca is a beautiful Sheriff. She’s a skillful gunslinger who defeated 19 dark mages singlehandedly. Bisca is famous for her curvier physique. She uses magic to rob the local town while inspiring fear in the citizens

When the female lead character is in her Flame Haze, her hair turns red. She’s one of the best athletes in her school and she gets perfect grades without any effort. This badass girl fights against monsters and she can devour the existence of humans. You would never guess it judging the hair of her innocent-looking bangs style

Akame’s younger sister, she’s a deadly assassin who was trained since childhood by the Empire to kill in the most efficient way. Like her sister, she cares for her fellow warrior friends. Her enemies recognize how cute she is until she slashes their heads off.  She has short black hair and black eyes.

We have another assassin on our list. Okuda is a very shy girl. Her glasses and nerdy look seem fittings as she is highly intelligent and proficient in chemistry.

She has black hair in the mang, but in the anime adaptation, she has long purple hair styled in bangs. She’s cute and sexy, but also awkward, and incredibly straightforward.

Rin is full of magic and beauty, she is a female sorcerer, an honor student in Shirou’s school, and the talented heir of the prestigious Tohsaka magus family.

Rin Tohsaka is an interesting character, she has a very serious personality. She’s famous for her high socks and shorts and she is also known for her long brown hair with split ponytails.

Anime: Classroom Of The Elite

Suzune is an arrogant and ambitious student, who excels in her academic years. She is the female leading character in the anime series Classroom Of The Elite. Suzune is a beautiful aesthetic girl, smart and devoted to her family. Her long hair and bangs go past her waist.

Here’s a girl who is quite a special treat from the ecchi harem anime series. Sagiri is a cute girl with long silver-white hair. She’s a shy and socially awkward character who dislikes others. She is extremely quiet and uses a speaker to be heard. She gets upset and overly concerned for her.

Hinata belongs to one of the most powerful and well-known tribes of Konohagakure – the Hyuga clan. She was the only student in the academy and among the first people, in general, to believe and see the true character of Naruto. The real reason for Hinata’s short bangs hair is because in Japanese tradition people who disappoint their families cut their hair short, as a sign of failure, as Hinata failed in her role in the Hyuga.

A new transfer student, and an unpredictable compulsive gambler. She’s truly a heartless girl who sees cheating as a way to make things more “interesting”. Yumeko is a very beautiful girl with black hair bangs styled. Usually, Yumeko speaks in a very sweet and cute manner, but once her true self comes out, her voice changes as well.

See relevant: 30 Dark Anime Girls That Will Freeze Your Soul

The kind, thoughtful and sweet Reki is helpful to everyone. She is a caretaker with a dark past, she also has black wings. She wore her hair in braided bangs when she was younger making her tomboyish nature shine.

Artoria Pendragon (Saber) is basically a female King Arthur who wields the holy sword “Excalibur.” I love this character. She embodies the archetype of a noble swordswoman. She has blonde hair with front bangs.

One of the supporting characters of Ore no Imouto ga Konna ni Kawaii Wake ga Nai anime series. She’s a highly skilled gamer and known as her handle name Kuroneko “black cat”. Ruri has long straight black hair and a perfectly styled hime-cut. Because of her clothing style and body type, Ruri looks younger than she looks. She is mostly cold to everyone but can be very sweet.

Anime: The Pet Girl of Sakurasou

A male character (yes, that’s a classic anime trap) and a talented and extremely intelligent computer programmer. With his feminine cute face and long black hair and bangs, it is easy to mistake him for a girl. His only communication with his dormmates is through Maid-chan, his AI.

Ikumi is an arrogant heir to a powerful family. She’s a student cook in the anime series. Her cooking skills are meat and donburi. Her dark skin and beautiful short blonde hair might confuse people about her origins, but this stunning thick girl is Japanese.

Anime: Darling in the Franxx

The carefree leading character of the anime series. She is an ace pilot with red horns and has waist-length, long pink hair with straight bangs covering her forehead. Zero Two is arrogant and lacks empathy, which is a good thing in her case since she’s famous for killing her co-pilots.

I could fall asleep in Kyoka’s singing voice. The fair-skinned character’s “Earphone Jack” Quirk allows her to plug the jacks that hang from her earlobes that she can manipulate at will. She has short dark purple asymmetrical bangs.

A kind and sweet young girl, Eru serves as the Classic Literature Club’s president. She has straight black hair that she sometimes wears in a rough high ponytail, and bangs that are cut straight across her forehead.

The beautiful Riddler who loves quoting from acclaimed literature works is a caring person to those she loved. The mysterious Aika has back-length light brown hair with square bangs. She was the magical girl of Exodus who knew too much about the world which distanced her from her peers.

Akane is is my favorite character on this list, she is the main protagonist of the anime series Psycho-Pass. She deserves special attention. Like her hugs, she has a shy and naive personality. She graduated at the top of her class making her sweet grandma proud. No wonder she has short brown hair with bangs.