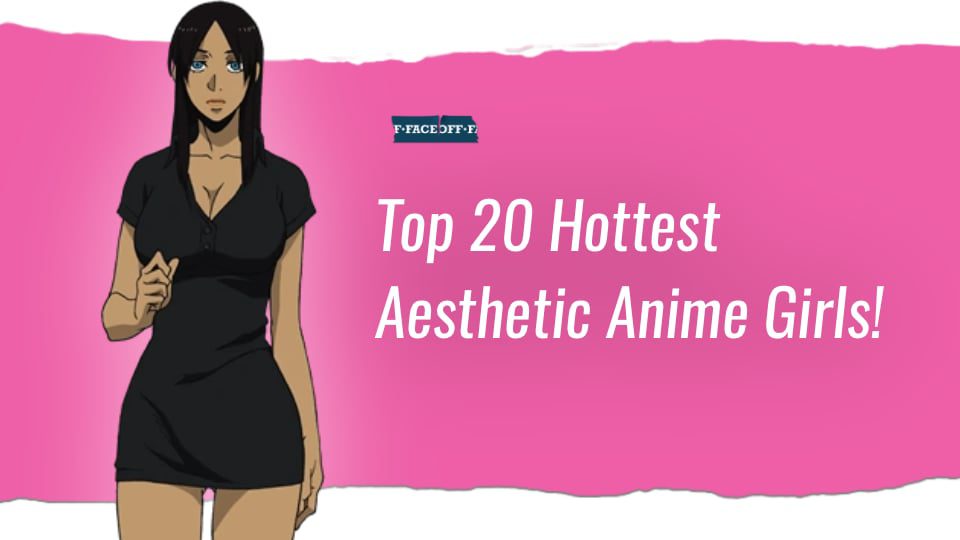 The famous premise “beauty is in the eye of the beholder” applies perfectly to anime aesthetics. It is the necessary element for making outstanding characters. There are many views on what is considered a “sexy aesthetic” female character, it depends on your visual angle and what makes it appealing to the eye.

In anime most of the time it is a no-brainer, there’s no shoratge of hot aesthetic girls running on the screen, and it is hard not to notice their physical appearance and body language. They are fundamental to the narratives and let’s face it, hot aesthetic girls made anime one of the most famous visual mediums all over the world. Here are my top 20 aesthetic anime girls.

Tsukuyo is a serious person, but despite her severe and stern attitude, she has a soft heart and is quick to give help when needed. She is a fearless character who scarred her own face to hide her female identity. Her aesthetic is all badass yet gentle at the same time.

2. Mikuru Asahina from The Melancholy of Haruhi Suzumiya

Asahina is a time traveler who comes from an unknown point in the future, as a young girl she was shy and fragile, but her future/mature character is filled with confidence. Her aesthetic is the “Femme Fatale” type, she is sexy and she knows it.

3. Yui Kotegawa from To Love-Ru

Yui is a high-strung person with a strong tsundere attitude who is unforgiving of inappropriate behavior. She is frequently seen with an angry or unpleasant expression on her face. Yui has an order obsession, everything needs to need organized. She provides the most fanservice aesthetic from all the characters in the series.

Valentine is a sight to behold. She is an arrogant and lazy character who is frequently seen sitting around. In contrast, the others work on a bounty while she spends most of her time beautifying her aesthetic. Faye has a dark existential, paranoid view that people are out to get and exploit her.

Alex is a troubled young woman. She is a street cat that had to go through abuse, both emotional and physical. She had no choice but to develop a strong character and survive her dark past. Alex cleaned herself up and began a new clean chapter. From my point of view that what makes her aesthetics so impressive, she’s a half-Chinese, a half-Black female character which is pretty rare to find in anime series.

6. Motoko Kusanagi (Major) from Ghost in the Shell

Major Motoko Kusanagi is a cyborg character that belongs to the “hot-emotionless-action-girl” aesthetic department. Her body was modified extensively with the best custom military cybernetics technology. Thanks to her bionic features, she masters a wide range of combat skills. Motoko dogged many bullets with a cold badass manner. She belongs to the “hot-emotionless-action-girl” aesthetic department.

Hitagi barely weighs anything when it comes to saying exactly what she feels, she has a biting tongue and can be rude when speaking to others. Yet, she maintains a straight expression, making her appear quite intimidating. To summarize, Hitagi is a total jerk, and many people find it hot, go figure.

Tsugumi is a blue hair female assassin, skilled in a variety of weaponry. Trained by the Bee Hive Gang! her personality is quite aggressive. She’s in the top physical condition with hot masculine aesthetic characteristics. She has a tomboy appeal that grabs the attention of both females and males.

Tsubasa has that nerdy hot anime girl with glasses aesthetic with black hair, and purple pupils. Her excellent marks make her a darling of the teachers, and her personable personality wins her fans among her classmates. However, those are all a facade!

Madame President is also known as “Her Majesty,” and appropriately so! Madam is a dark skin sexy girl with an aesthetic appeal. an intelligent strong-willed woman who loves to dress expensively. She owns a software company named T.N. Software, which allows her to live a lavish lifestyle. Her attire is usually very outgoing.

Yoko is a cute red-haired character, this girl knows how to use a gun! She has an extensive range of firearms which include a long-range sniper rifle and handguns. She loves to wear a sexy bikini top with short shorts, which adds to her hot aesthetic. Yoko is a mature and knowledgeable lady, particularly in survival and basic common sense.

Miharu is a charming and cute pink-headed alien girl from planet Seiren that is inhabitant by mostly females because the men on Seiren comprise less than 10% of the population. Her charisma utterly disarms anyone around her, and her trusting nature allows her to make friends effortlessly. Sweet, innocent, and naive, Miharu is a free spirit with very little regard for what society considers decent behavior.

13. Farangis from The Heroic Legend of Arslan

Farangis has an extremely aesthetic revealing outfit with a draped hood. She is frequently referred to as “exquisitely beautiful.” Her personality is portrayed as cold and aloof. However, towards her companions, she is seen to give sisterly support and a kind supporting heart.

Mayumi is a straightforward character who will always tell you what is in her head, and she wonders why she always finds herself in bad relationships. Mayumi has people staring at her body quite a bit, it’s very hard to see her eyes as she hides behind a pair of big glasses, that’s part of her appealing mystery aesthetics.

Bishamon is known as a goddess of war and battles. She welcomes any wandering and distressed spirit, valid or not, and accepts them into her tribe. Bishamon can, however, be rather lonely. Her tall and powerful hot appearance strikes fear in her opponents.

Maou, also known as the Demon King, is a medium-sized woman with detachable horns and long, flowing crimson hair that falls to her shoulders. She has deep, ruby-colored red eyes, just like her hair. Despite her youthful looks, she is over a hundred years old. Maou is sensitive about her body, which her Senior Maid frequently mocks. Her attitude is often laid-back, cheery, and calm.

17. Ichika Nakano from The Quintessential Quintuplets

Ichika’s dream is to become an actress, but when she starts getting cast in movies, she always gets very minor character roles, often time she plays the “dead girl”. Ichika gets the boy’s attention with her stylish pink hair and sexy aesthetics. However her appealing physics might be, I love the fact that she is a selfless character, the big sister who takes after her siblings.

Shura was on a path of evil until she was saved and became the priest’s apprentice. She eventually earned the title Meister as both a swordswoman and a Doctor. Shura’s aesthetics is sometimes quiet and socially aloof, but soon comes out with a relatively laid-back attitude and frequently uses slang.

Often known as Pansy, Sumireko is a tiny, plain girl with black hair done in low twin braids, bright blue eyes, thick black square-rimmed spectacles, and a reputation for appearing gloomy. She is a stunning beauty, well-mannered, honest girl with a lot of charisma, a tendency to talk smoothly, and a lovable naive character.

Yumeko has to be the wildest and hottest character of all aesthetic girls on this list. She is a compulsive gambler that brings chaos to the established order. Yumeko knows no fear, a trait that brings her to put everything on the line in an extreme way. She doesn’t care if she wins or loses, as long as she can live on the adrenaline rush.