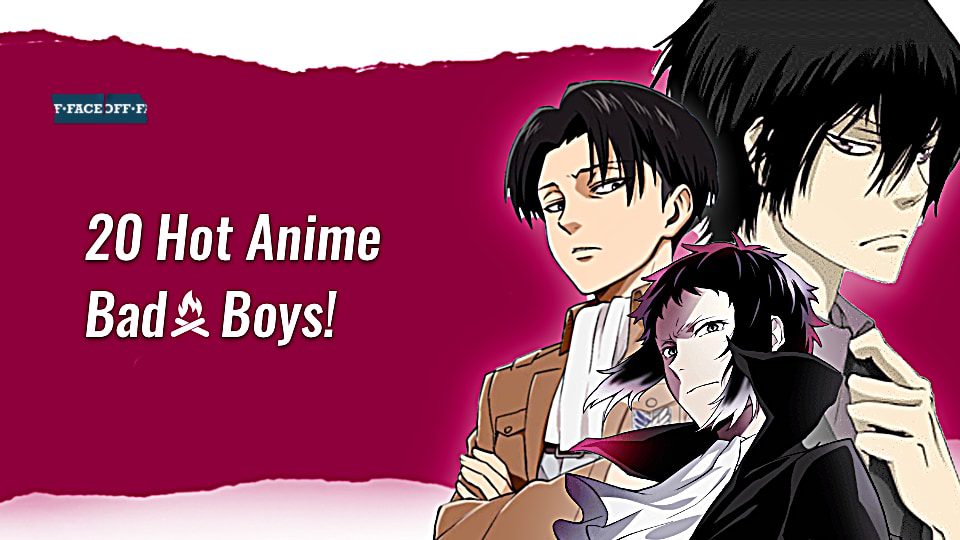 It almost seems like most Hot Anime Bad Boy characters possess powerful swag personas that are just too hot to handle. Why? because when we think about anime bad boys, we are immediately drawn to them, trying to understand what makes these handsome males tick. Of course, the ideal handsome bad boy walks the fine line of possessing a sexy witty loner persona alongside a dark dangerous soul.

When talking about hot anime bad boy characters, it’s a given that some alluring antagonists will make their way into the list. Shougo Makishima is a criminally handsome asymptomatic male who harbored the goal of liberating society from the system.

To this end, Shougo has no issues causing suffering and is entranced by the ugly aspects of humanity. Makishima’s face is typically brimming with emotions; all while being a badass skilled fighter. Added to this, his charisma and love of dystopian literature and you get an irresistible handsome male.

2. Naofumi Iwatani (The Rising Of The Shield Hero)

This hot bad body is the Isekai anime op mc. As the hottest bad boy in a parallel universe and beyond, Naofumi was initially a positive and enthusiastic guy, but his personality took a 180 once he was betrayed. Turning distrustful and hostile, he hides it all beneath a calm and indifferent attitude.

His hatred reaches new levels whenever he starts to feel disgusted by women and is completely oblivious to their advances. The term hot bad boy is a good example to describe Naofumi, he is a work in progress, an attractive one, if I may add.

See also: 40 Anime Where the MC is Op But Hides his Power

There’s no doubt that Itachi is one of the hottest bad boys in anime. His whole handsome essence reaches another level and leaves an ever-long impression. Calm and intelligent, Itachi’s selflessness knows no limits.

However, despite how much of a prodigy he was, he stayed humble throughout. Regardless, he has shown his limitless badassery and just how OP he was time and time again. His cold and seemingly emotionless gaze is enough to send chills down countless spines.

4. Haru Yoshida from Tonari no Kaibutsu-kun (My Little Monster)

All the gals and boys know that Haru is a hot bad boy who only has eyes for Shizuku. He is prone to impulsiveness, violence, pessimism, and cynicism. But on the inside, despite appearing to be an aggressive delinquent, he is actually quite an innocent and naive man.

That duality right there makes him a really attractive hot young male. Considering how possessive and protective he is, he can be seen as an ideal boyfriend too. His toned muscles, gray eyes, and pure smile can make almost anyone’s heart skip a beat.

The demon butler of the Phantomhive household, Sebastian is a tall, handsome boy. He is insanely critical but devoted to Ciel while continuing his duties as the perfect butler.

Regardless, he is a cunning and sadistic demon at his core, deriving amusement from others’ suffering and struggles. This merciless but flawless handsome butler has fans wishing he would claim their souls too!

InuYasha may be the male lead, but there’s no doubt that Sesshomaru always stole the spotlight when on screen.

As a powerful daiyokai, he is feared throughout the land. Composed, calm, confident, and calculated, he shows zero interest in greater power. However, his fondness for humans makes him quite the heartthrob. All of this clad in a royal white kimono and you have got one hell of hot and handsome anime bad boy!

The next bad boy in line is the strong male lead, Lelouch Lamperouge from Code Geass. An intelligent cold, and ruthless prince. He shows great disinterest in trivial matters. On the other hand, he is handsome, charismatic, and compassionate, to those he loves.

While holding onto his vision of justice, Lelouch also shows great concern for his subordinates. When it comes to looks, Lelouch is a tall, dashing young male with a strong aura. His shiny violet eyes look even more handsome alongside his royal white robe with gold accents.

He appears mischievous or unsavory at times, but Izaya claims he loves humanity. This hot bad boy is very fond of the unpredictability of human nature. Thus, he enjoys putting people in chaotic situations just to watch their reactions.

He possesses a keen understanding of human behavior and tendencies, being able to accurately deduce their thoughts and predict their actions. Cunning, and charming, Izaya is no small troublemaker.

The fearsome Kira is a good example of a hot bad boy who is typically dressed in casual clothes. In his school uniform, he is extremely handsome and classy with an air of refinement about him. But Light Yagami has excessive pride and self-confidence spawn a warped sense of justice within him.

Decisive and resolved, he is ready to use anything and anyone in order to achieve the “Perfect World” he most desires, all except his family. His “God” complex makes him the perfect red flag, but hey, fans see him as a carnival!

10. Dabi from My Hero Academia

As a major antagonist of BnHA, Dabi joined the League of Villains in his pursuit of revenge. The most badass thing about him is his blue flames. Dabi is as cautious as he is crude, violent, and enigmatic. As a loner who prefers to get things done on his own, he doesn’t seem to trust anyone.

On his maniacal side, Dabi enjoys his life as a psychotic villain. He is extremely sadistic, shows no remorse over attacking the innocent, and finds pleasure in taunting people. Psychological warfare is also part of his devious kit. Chalk up a point for this hot, yet ultimate bad boy.

The charismatic Ash knows he is a hot bad boy, especially with his sexy glasses. He uses his attractive features to his advantage. Albeit falling victim to undesirable sexual advances, harassment, and mockery.

Armed with the sharp personality, intelligence, and skill to gather people around him, Ash is also competent in combat, and marksmanship. He knows just how to navigate people. Ash is locked in a constant struggle for freedom and to overcome past traumas.

Rashomon believes in survival sparing no mercy for the weak, he is ruthless and feared by all. He does not fear pain or defeat. His violent crimes reverberate throughout, and despite being indiscriminate and hostile, he does not believe in meaningless torture and prefers to go straight for the kill.

He is bad to the bone. What makes him a hot anime bad boy is the fact that he is generally composed, and brutally honest. His inferiority complex, however, leaves him in a state where he doesn’t care for his own well-being.

Kyoya has many outfits, all of which are neat, classy, and intimidating. He doesn’t care about the well-being of others, preferring to use whatever means necessary to achieve his goals. Strong and quick to assault, Hibari prefers to be alone and isn’t much of a team player.

He hates being restrained or controlled but seems to have a soft spot for small animals, no surprise there, the worst and evil dictators always prefer animals over humans. He is helpful though, and respectful on occasion, while also being indomitable, unhindered, and not-so-heartless.

Hayabusa’s sharp facial features, blonde hair, piercing blue eyes, and three small braids give him an extremely refined and handsome look. He wears the school uniform with his own unique and classy twist, and the visible scar across the bridge of his nose only makes him more desirable.

As the leader of a delinquent group, he is hot-headed and easily angered or provoked. His cool demeanor, caregiver role, love for his family, and concern for students’ well-being make this Handsome Anime Boy a must on this list!

Ando is typically seen in his hot school uniform, which looks like it was somehow built for him. This badass is edgy, energetic, and has a terrible case of chunibyo. He has a tendency for perverted acts, which he considers unavoidable, but ends up assaulted.

Serves him right! Ando continues his bad lifestyle without remorse, possessing a carefree and accepting personality. What’s not to like about him?

DBZ’s powerful character, and one of the first original bad boys of all anime, give it up for Prince Vegeta! The loving husband of Bulma, and Goku’s egotistical archnemesis.

My boy really has issues. He is a ruthless cold murderer (on occasion), while protective of his loved ones. He is also shown to be arrogant and vengeful with a superiority complex. While Vegeta is almost always itching for a fight, he is also quite intelligent, serious, and respectful. His immense character development is widely praised and has helped make him irreplaceable.

The handsome warrior from the dark medieval show is well-mannered and highly intelligent. Unique with an undeniable presence, his splendor, grandeur, strong sense of ambition, and conviction make him a worthy addition to the Hot Anime Bad Boys list of characters.

Armed with a high perception, and a deep understanding of human emotions and motivations, he tends to stand above others. On the other hand, he is opportunistic and narcissistic. Following his incarnation, Griffith’s beauty became so profound, picturesque, and akin to a painting. His perfect silver armor causes both men and women alike to lust over him. His tall sturdy hot build makes him just as proficient in battle as well!

Fan-favorite Levi is typically seen frowning or expressionless, he is actually pretty calm and difficult to read. He is constantly in the midst of conflict, he has sustained many injuries over the years. This does not stop him from being an absolute clean freak.

He is unapproachable, cold, quick-to-insult, and inappropriate at times. Regardless, he is obedient and loyal to a selected few and has a strong sense of morality. He is secretly caring about his subordinates. There’s only one thing he is truly merciless against – Titans!

See also: Did Mikasa Love Eren In Attack On Titan? Deep Dive into their Relationship

Tokyo Ghoul’s protagonist started off as a very plain, scrawny short guy. Over time he changed into a more muscular man. Kaneki’s personality did flips between a hot bad boy and a nice guy.

In his badass phase, Kaneki is ruthless and brutal in defense of his loved ones. While his inner gentleness never completely died out, he became more power-hungry and arrogant on the outside. He remains unhappy about his own existence for most of the series and is quick to blame himself. He is, in essence, he is one of the hottest bad boy anime characters ever spawned!

Despite being hundreds of years old, this sexy foxy boy from the josei anime Kamisama Kiss is an extremely handsome demon. His best body feature is his fluffy, full, whitetail! Tomoe is cunning, sly, and unaware of his good looks but knows exactly how to pour on that bad boy charm.

He can be quick to mock and has severe cases of short-tempered outbursts. On the flip side, he possesses a strong sense of loyalty, pride, and protectiveness.

This concludes this list of the finest Hot Anime Bad Boys out there. Did you find your favorite? If not, he probably will be an entry for another list on another day!