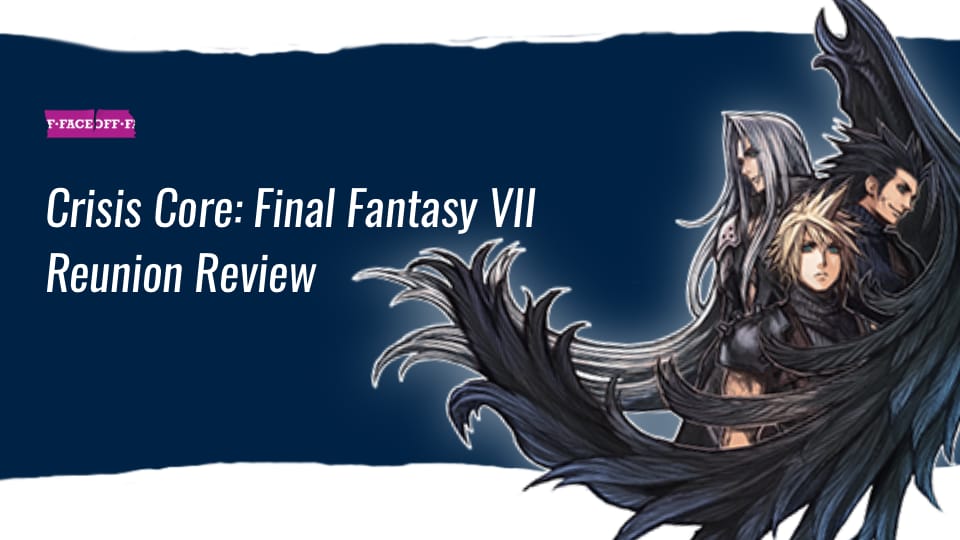 I’m going to start this review with a full disclosure: I could put a detailed introduction here about how important the Final Fantasy series is to my life and essence as a gamer in general and as a role-playing fan in particular. There was no game I loved more and became more addicted to than the second-rate soldier’s quest to become a hero. I will write words, I’ll review them, and give my final verdict. But you don’t need to be here, to read all this. Go. Play the new/old/new Crisis Core. Then with that mindset come read what I thought about Crisis Core: Final Fantasy VII Reunion, the remaster of the iconic PSP game.

Much more than just a remaster, not yet a remake

The game that was “stuck” on Sony’s first portable console since its release in 2007 finally got the remaster that Square Enix defined as “much more than another remake”, and how right they were. This game sets a new bar for remake games, it’s not a remake. I’m going to list almost every element that’s been improved here and believe me the work done on Crisis Core: Final Fantasy VII Reunion really makes the original game feel redundant, outdated, and no longer needed, except for collectors.

The game’s story centers around Zack Fair, a member of the paramilitary organization SOLDIER who is involved in events leading up to the game’s predecessor. The game is set in the world of Gaia, where Shinra is extracting the planet’s life energy, known as Mako, to use as a source of power.

We step into Zack’s shoes as a low-ranking member of SOLDIER, but he quickly gets caught up in a series of events that lead to him uncovering the truth about the organization and its actions. Along the way, Zack meets various characters from the original Final Fantasy VII, including Cloud Strife, Aerith Gainsborough, and Sephiroth.

As Zack delves deeper into the mysteries of SOLDIER and the true nature of Mako, he becomes embroiled in a larger conflict between Shinra and a group of rebels known as AVALANCHE, who are fighting against the company’s exploitation of the planet.

The game tells the story prior to the main story of Final Fantasy VII, as it follows Zack, the soldier who eventually bequeaths his Buster Sword to Cloud, and his journey to becoming the hero soldier he wants to be – just like Sephiroth and the other soldiers with him on the team: Angeal and Genesis.

The game’s combat mode got the biggest upgrade. It took a lot from the remake of FF7 but contains one of the coolest tools that Crisis Core had in the box: the DMW (or in its full name the Digital Mind Wave). The gameplay features real-time combat and a mission-based structure.DMW allows players to earn new abilities and items. The game also features a leveling system and a material system, which allows players to equip magic spells and special abilities. Everything also moves really fast and there are no frame drops even for a moment (played on the PlayStation 5 version). The game’s DMW minigame is also easy to understand, with simple mechanics that players can quickly pick up. The game also allows the player to define several sets of attacks that he can adapt to any situation without entering the new Stance system of the Buster Sword at all.

The addition of different buttons on the different remotes allows us to open a menu that allows us to use Zack’s special attacks without messing with that little line at the bottom of the screen that we had to scroll left and right to find the attack we would like to perform. It’s such a big improvement that makes the game flow in a really amazing way – it really is a true action/role-playing game – like nature intended.

I so enjoyed watching the different attacks of and especially the Chocobo Rush of this game. The videos often repeat themselves but don’t worry, every FMV video in the game can be skipped with a triangle.

The game runs great on the small Nintendo console: the game is more or less locked at 30 frames per second without too much mess, crashes, or special problems. Yes, the textures took a hit and the other effects are not like the other versions, but in the end, this is a game that works great on mobile.

It has also an excellent PC version. Yes the amount of graphics settings you can play with is a joke and the fact that the game is limited to 120 frames per second is delusional to me, but I put all that aside. What I enjoy so much is related to the fact that the game runs on the Steam Deck at 800p with the highest settings at 60 frames per second in most cases with single and insignificant drops (such as in cinematic scenes and special attacks where our character has no control. I had to rub my eyes that a game that looks so good works so well on the Steam device.

The graphics are smoother and generally faster and more suitable for the player and consoles that no longer have the limitations of the PSP at the time. The visual improvement that the developers gave to the game can only be defined as a glow-up. The game looks closer to Final Fantasy VII Remake than the original game, with Zack’s model redesigned to more closely match how he would have looked in the remake. Special attacks such as the attacks that occur when the DMV meter shows Jackpot or during summons have received new and simply spectacular animations.

We are finally back to normal use of the UNREAL ENGINE 4 engine which is already in its twilight. : The game still suffers from the design choices of the PSP, so different areas are divided into segments and you’ll see quite a few loading screens when switching between the different areas. This is not an open-world game. Most of it is built from small or maximum medium areas. But I found myself preferring it that way. I am very happy that they chose the “remaster” option and not the “remake” and changed world orders in terms of the stages.

But with all due respect to the improvements in graphics, music, and gameplay, I must comment on the dubbing in this game and in particular the English dubbing. The voice actors in the original American version were replaced by the FF7 remake actors. The script of Crisis Core: Final Fantasy VII Reunion and the truth that most JRPG games tend towards the more bombastic and overdramatic – befitting a Japanese game. There are all kinds of “tics” of anime games. Like a lot huh? And Ummm and 3 points for adding drama between sentences where it’s not really needed. But while the original dub managed to sound quite reasonable, here in the new dub I had too many moments of unbridled and merciless cringe.

The dubbing quality reminded me of the PSP era itself and not a new remaster.

The remastered score is excellent, the composers of the remaster did an excellent job of capturing the essence of the original game and bringing it into the modern era. It’s not an amazing change – but it’s kind of hard to upgrade something that’s amazing.

Why are you still here?? Hope you skipped to the verdict to read a line or 2, look at the score and then play the game already. I think that in the endless of ​​remakes and remasters, you can put Crisis Core: Final Fantasy VII – Reunion on the side of the winners: it is a game that does everything to please the fans of the original PSP game but at the same time, brings it to the same level as the excellent remake of Final Fantasy VII.

This is a huge progression from the PSP game and is really welcome. There is not a single change for the worse and everything really helps to bring the game to its highest level

True, the dubbing is very cringy (as befits a game that comes with dramatic Japanese writing and is translated into English), but to be fair, it only adds to this great experience. The improvements to the UI, the battle system and the graphics lead to the simple conclusion: if you missed Crisis Core and the prequel to Final Fantasy VII, this is the best way to experience it. Even the Switch version is great, so you have no excuse at all.