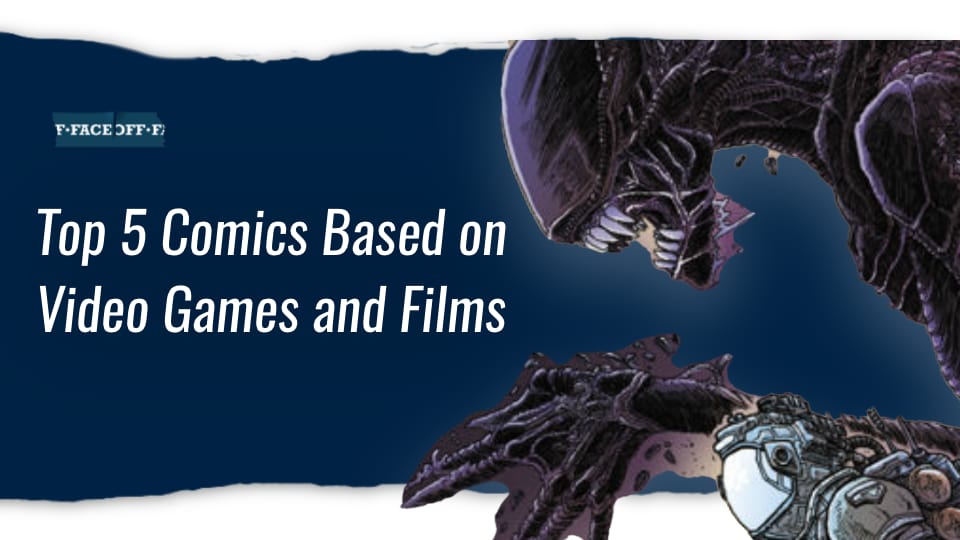 When films, novels, TV programs, and video games become popular or achieve cult status, they sometimes produce a comic spin-off. The comic can be a direct adaptation of the original creative piece or work to further explore and develop its universe. As it turns out, not all creative works translate well to comics, especially when it comes to direct adaptations: some universes lack the depth and philosophy required or otherwise suffer from an uneven balance between action and characters that can really leave the reader unsatisfied. Having said that, here is a list of some proper adaptions.

5. Dawn of War III – The Hunt for Gabriel Angelos

What’s cooler than a legion of Middle-earth Orcs getting shredded by a Rohan cavalry? That’s right — a legion of space Orcs getting torn to pieces by Space Marines. Add to it the powerful, long-living, Eldar aliens, who in many ways resemble Elves (actually, Middle-earth Elves are also referred to as “Eldar”) and you got yourself a hell of a Tolkienian space opera.

Like many others, I first fell in love with the idea of Space Marines in the 1986 Aliens movie. Those wisecracking, cocky SMs were the original and, for me, the best. Having said that, I kind of like the way Dawn of War’s marines (the Blood Ravens) contrast the Aliens SM’s gung-ho attitude. They don’t seem to actually enjoy busting Greenskins but do it because it’s their duty.

In the comic, a small Blood Raven rescue team lands on a hostile planet to search for their MIA commander, Gabriel Angelos. Soon enough they find themselves outnumbered by a green tide of Orcs and engaged in battle with Eldar forces. What was Gabriel looking for inside the treacherous catacombs of this godforsaken planet in the first place? And can his men bring him home?

Somewhere along the line, I developed a love for the code of honor among soldiers. Gabriel Angelos is the heart of the corps and the best of it. The code of honor among soldiers is put front and center as Angelos’s sergeants’ volunteer for a suicide mission to get him out. Space Marines, Techmarines, everybody puts their life on the line for their beloved chapter master. This book is pure action fun. And as a huge J.R.R. Tolkien fan—did I already mention the Orcs?

4. Dark Souls: The Breath of Andolus

How do I describe the Dark Souls franchise? Well, it’s dark. How dark? Dark enough to make most Batman stories look like Care Bear adventures. So dark, any speck of light is easily noticed. And the protagonist of Dark Souls, the lady knight Fira, desperately needs to hang onto any glimmer she can find, as the darkness encompasses her.

Fira, a fearless warrior, sets out on an arduous quest to unite three precious relics. She needs the artifacts to perform a ritual that will rekindle the flame of her kingdom. Fira must face a series of unbelievingly strong foes, while at the same time battling against her own mind, as an undead curse leeches her memory. Joining forces with a two-faced seer, the two stumble from one danger to another. But Fira is not as righteous as she believes herself to be. Along her journey, we slowly realize there are still (horrible) things left unsaid about her forgotten past.

One thing that bothered me was the excessive use of thy”/”thou” in the text, making it sound archaic. The word “your” is very common, and on some pages, it appears in every other panel. If you’re able to put this minor infraction aside, you can really enjoy this journey where — Just like in a video game — once a monster dies, it ends the level and gets you to a new one. Done in a truly unique atmosphere, providing fertile ground for infinite stories. Blackness and despair. Claustrophobia. A story that ends on a somewhat gloomy note. Apparently, good comics do not require sunlight to grow well.

There’s a Monty Python sketch where this hunter, played by the one and only Graham Chapman, says: “I love animals, that’s why I like to kill’em. I wouldn’t kill an animal I didn’t like”. Well, it doesn’t sound that funny without Chapman’s delivery, but trust me — it’s hilarious. Anyway, I guess that’s the way I feel about Zombies: I love them. So it makes sense that’s why I like to play Call of duty: Zombies, one of the best Zombie killing games around. And it also makes sense, that’s why I like the comics too.

Sliders meet The Walking Dead. If you can start to imagine that mash-up then you’re on your way to figuring out what this series is all about.

A crew of people that hardly ever get along is trying to escape from a seemingly endless horde of Zombies that demolished their home dimension. The only thing that guides their way, is a mysterious voice inside one of the crew member’s heads. But can they trust the voice to get them to safety, or is it just using them for its own purposes? Jumping through dimension doorways, blasting waves of Zombies, and performing tasks, they can barely spare the time to contemplate it.

This is the interdimensional version of “The Amazing Race”. This feeling of being on a constant run, always vigilant, connects well to the shooter videogame. The identity of the man behind the voice and the stakes involved slowly but surely unfold. I only wish the dialogue of the script was a bit more sophisticated. Even with its few shortcomings, COD: Zombies is a very fun series to follow, with a firm grasp of the comic medium.

Wow, James Stokoe -apparently a true one-man creative team – really sets the bar high on this four-issue miniseries, both from a story and artistic standpoint.

Far out in the wilderness of space, a way station encounters an unmarked vessel. Shortly after an unsuspecting crew board the vessel the massacre begins. Now, an engineering officer must use all available tools — a timer, utility kit, and his wits — to survive an attack from the deadliest creatures known to man.

Dead Orbit depicts some truly strong characters and smart dialogues. The atmosphere and mood are set perfectly. The story is so engaging, that you actually feel the emotions of the station’s staff on the outskirts of space.

The boredom, the solitude, the little grudges, and intimate familiarity between the characters. The only thing the story lacks is something new about the Alien menace, but even without it, Dead Orbit is definitely an A+ series.

1. World of Tanks: Roll out

My elder brother was a tank crew gunner. The day came when I asked him the inevitable ten-year-old boy question: “What is the best tank on the battlefield”? To which he quoted a saying from the armored corps: “The man in the tank will win”. This means, that it’s the crew, not the tank that matters. In many ways World of Tanks: Roll-out was created to challenge this assumption.

The story takes place in the Normandy countryside, post-D-day, as light British Cromwell tanks with small caliber guns and butter-for-armor try to cope with the complete superiority of German Panthers. For one Cromwell crew, the only chance to get out in one piece may lie in the unusual nature of their tank, Snakebite.

It’s a thrilling mind game between the Tommies and the Jerry’s in the fields and hedgerows of northern France. The only question that still seeks an answer is whether there are no rules in war or if even during the war, there is still honor among (enemy) soldiers. One thing’s for sure — If you ask the Waffen S.S., the answer is obvious. The British are as British as they can get and the clash of principles between the Wehrmacht tank commander and the Waffen S.S. officers is fascinating. Never a dull moment in World of Tanks: Roll Out. Truly an Excellent read.