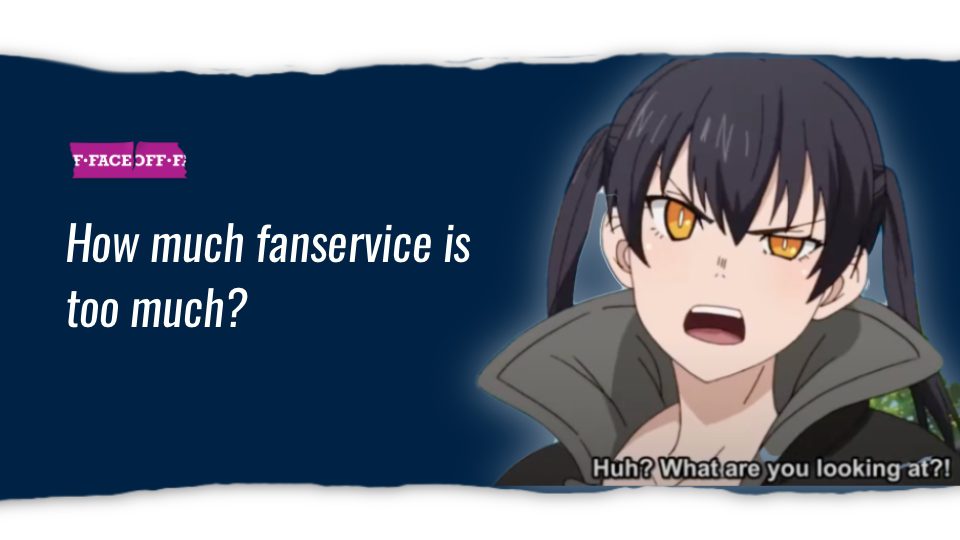 An issue that has occupied the anime community quite obsessively in recent years is fanservice.
One thing that I have come across, again and again, is the questioning of quite a few people: why do so many anime series need so much fanservice? While some argue that fanservice can be a distraction from the more important elements of an anime, others argue that it can be an important part of the appeal of anime and can help to attract a wider audience. In this article, I’ll explain why fanservice actually exists and why it is more than a cheap tool designed to attract the attention of the young anime male demographic.

Fanservice is a very broad concept that comes in quite a few different forms, for the purpose of the current discussion, I will refer to what people mean when they bring up this concept: sexual content (“Ecchi” if you will). Another thing I’ll mention is that I don’t intend to go into all the controversial sexual/gender issues in the anime medium. (Lollies, harem, traps, and other tropes).

Every anime fan in 2023 knows how to recite the following formula: Double screen time /panty shot = money. Fanservice is typically used as a way to boost ratings and/or merchandise sales. The common claim is that fanservice by definition is some kind of cheap tool to attract an audience, mostly straight men who want to see sexy anime girls.

Why is fanservice is so contrevercial?

This is a fact that has become so established in the anime community in recent years that one can think that, at least in the Western audience, it achieves the opposite result: people are quick to shrug it off, to say that they don’t watch for it, that they would prefer it not to happen, that it just takes them away from the series and other well-known recitations. Those who are new to the field in general get a culture shock from the whole thing, and it’s understandable.

I’m not saying they’re lying, but I do feel that it would be impossible to express much appreciation for this creative and unique aspect of the medium without being portrayed as some kind of sexist who supports the objectification and subjugation of women, and other compliments that characterize the internet debates. In this situation, I do think that at least In some cases (not all) people make excuses or hide their opinions in order to look good in the eyes of others (and it’s hard to blame them).

Nudity has always been and always will be part of the artistic landscape, not only in Japan but all over the world. From old works such as the statue of David by the Italian sculptor Michelangelo from the Renaissance period to Kitagawa Marin, our favorite cosplayer from the modern era. It is used in so many diverse ways and expresses so many different messages: purity, passion, aesthetics, strength, weakness, shame, and many more. In drama, this is used, for example, as a tool for increasing risks, characterizing characters, bringing intensity to the scene, and sometimes also just for humor purposes.

While ecchi anime does contain some fanservice elements, it is not solely focused on sexual content. Instead, ecchi anime tends to be more light-hearted and comedic in nature, with the occasional sexy scene thrown in for good measure. This makes it the perfect genre for viewers who want a little bit of everything.

In the most basic sense, ecchi is a subgenre of anime and manga characterized by humor and suggestive themes. The word itself is derived from the Japanese phonetic spelling of the letter H, which is often used in Japan to denote sexuality.

Ecchi often features characters who are in sexually charged situations in suggestive behavior. In some cases, however, ecchi does feature scenes of a sexual nature.

Fanservice and Ecchi are the same things?

There are a lot of people out there who think that fanservice and ecchi are the same things, but they couldn’t be more wrong. While both genres often feature shots of scantily-clad women (and sometimes men), there is a big difference between the two.

Fanservice is defined as “material in a work of fiction or in a real-life situation which is intentionally designed to titillate or excite the viewer or reader”. It can take many different forms, from sexually suggestive dialogue to outright nudity.

Ecchi, on the other hand, is a genre focused on lighthearted sexual humor. It typically doesn’t feature any nudity or graphic scenes, but it will often include situations that are meant to be funny or provocative. Ecchi anime are usually targeted at a male audience, and often feature beautiful female characters.

So, while both genres may feature similar content, they are definitely not the same thing. Fanservice is all about titillation, while ecchi is all about laughs.

Why do people hate fanservice that much?

Ecchi or fanservice are not limited to specific genres. You can find them in a wide variety of series, even the most popular, and I probably won’t exaggerate if I say that today most series have at least a small amount of exposed skin and camera angles that we wouldn’t be proud to show to our parents. The question then arises, why forcefully push it everywhere?

Due to the fundamentally different presentation of sexuality in anime compared to Western series, it is easy to jump to conclusions without really knowing the culture and the attitude that has been built on the subject over the years.

I am not saying by the way that there is no place to criticize another culture, I don’t like this argument and think that there is quite a bit of need for criticism in many cultures in the world, but I do think that before criticizing it is advisable to get to know the thing that is being criticized and really try to understand it in depth.

Fanservice and ecchi is a tool and isn’t inherently bad

Here are a number of examples of series in which the fanservice is a main motif and an integral part of the content, the so-called “Ecchi genre series”, for which it is known in advance that they are aimed at a specific audience that connects to it.

Fire Force anime series has been the topic of debate due to its use of fanservice because it has a strong female cast and the use of fanservice can be seen as a way of objectifying them which can be considered as a form of sexism.

It’s possible that the chapter of the Fire Force manga, where Tamaki is fighting an enemy while some people in the background are criticizing her for vulgarity and exhibitionism, is a response from the creator, Atsushi Ōkubo, to criticism of the use of fanservice in the series. It’s been shown that the creator is aware of fan service criticism and decided to address it in the manga.

The chapter could be interpreted as a commentary on the double standards that exist in society, where women are often criticized for being sexually expressive, while men are not. The scene could also be interpreted as a way for the creator to address the criticism of fanservice in the series, and to show that the female characters in the series are more than just sexual objects.

In response to recent criticisms of fan service in the Fire Force anime, author Atsushi Okubo has issued a statement via the manga’s official website. In it, he notes that while he understands the concerns of those who feel that the show is objectifying women, he believes that the fan service is an important part of the story. He goes on to say that the Fire Force is not intended to be a “sexist” or “objectifying” work and that he hopes viewers can enjoy it for what it is: an exciting action-packed series with plenty of heart.

Any instance of fanservice in an anime is usually criticized as out of place and unwelcome, regardless of the genre or context. Others may feel that certain types of fanservice are more appropriate in certain genres than others, or that there should be a balance between fanservice and plot/character development.

Another example is in episode 2 of My Dress-Up Darling, one of the more provocative episodes of the series, which is entirely centered on the measurements of Marin’s various body parts for the preparation of her cosplay, there is a lot of use of the same ecchi to tell us about her and on Gojo and start their relationship. Socially, the two are at opposite ends of the scale – Marin is a beautiful girl, super popular and surrounded by friends and suitors, while Gojo is an introverted and lonely type who doesn’t feel worthy of her attention and is very confused in this unfamiliar situation that has fallen on him.

Despite this, she is the one who needs him and her willingness to expose her body in such a way in front of him shows how much she trusts him, how important this cosplay is to her, and also presents her as a very free and self-confident character – exactly the opposite of the prevailing claim in such cases about superficial characters.

Fanservice, or ecchi, is used in many cases as an artistic tool. It is indeed presented in a more graphic way for the most part than in Western media and for a wider age range, but that does not mean that it goes further than that, at least not in most cases.

There are many series that rely on it as a main component, series as Highschool of the Dead, and Prison School which is all about the sexual tension between their protagonists and the other girls around them. Shokugeki no Souma is also famous for its use of ecchi to present the wonderful taste of the food the characters eat as a form of pleasure.

In the end, I would like to present a slightly more personal claim, but I think it is important that you say: if the main complaint against Fanservice is that it is about “cheap” content that takes away from the creative process for the cynical purpose of attracting people, it would be a bit hypocritical to ask to reduce or remove it out of a desire to… attract people. This is a kind of preference, even a bit ugly in my eyes, of a certain audience over another audience: of the one who was not interested in watching because of the fanservice over the one who watches, among other things, because he understands and enjoys the beauty of the fanservice as it is expressed in those works, when the first type is also such He wasn’t really interested in anime in the first place.