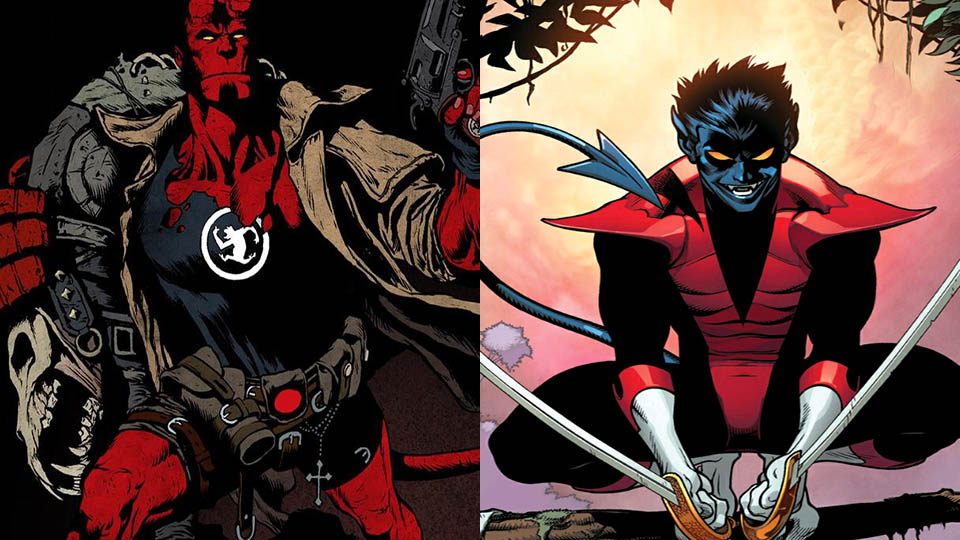 Having a tail could really be of use in a fight! It all depends on the type of tail, of course, but basically, you can use it to tail-whip or slap your opponent. You can attack someone who is right behind you with your tail without having to rotate your torso for a back kick, or – if the tail is long enough -you can use it to distract your enemy by rubbing the tail against their face. Thin round tails like cats have are really effective in keeping balance. A heavy tail – like a lizard – would be useful as a club. I believe a tail like a peacock could be used to dodge more effectively – imagine flaring your tail behind you so that it completely obscures your body.

In this category, we faceoff the 10 top fictional warriors with tails in history. However, one big question remains: how can these guys even wear pants?

Hellboy is a big, red-skinned half-demon with a tail and horns. Being the child of a demon and a witch, Hellboy is of course a very powerful warrior. He is super-strong, super-tough, regenerates, and is 100% immune to fire in all its forms. Hellboy has the Fist of Doom, that big misshapen hand that has some capital-d Destiny to it, and which proves strongly anti-magical and brutal against other demons/magical entities. I once saw Hellboy in the comics wrapping his tail around someone’s neck. In another instance, during a fight, he zipped his tail forward to catch a falling box, but other than that, I don’t think he really uses his tail in combat.

Nightcrawler is a mutant. In addition to various powers related to his altered body form – like having blue fur and a tail – he can teleport and can crawl walls. Early on, it was also stated that he could go invisible in shadows, but that is one of those things that is generally only sometimes remembered. Nightcrawler’s tail seems to be more prehensile than Hellboy’s. It allows him to grab onto objects with ease. Also, it is strong enough to not only carry his entire body weight but also lift a regular man completely off the ground. It is deft enough to fight with like a sword, which I never saw Hellboy do.

If you had to choose one of those two tails for yourself, which one would you choose? Hellboy’s or Nightcrawler?

2. Cheetah (WW) vs Catra (She-Ra and the Princesses of power)

Barbara Ann Minerva was cursed by the evil plant god to be a ferociously cruel monster named the Cheetah. Her powers matched Wonder Woman’s godly powers but the Cheetah is more savagely brutal in hand-to-hand combat. And Cheetah’s super speed is faster than Wonder Woman’s super speed. Cheetah’s physical durability is enough to withstand blows from the likes of Wonder Woman. Her claws and fangs are enchanted and allow her to cut almost anything. Even the flesh of superhumanly durable metahumans offers little resistance. She can also see in the dark, on approximately the same level as an owl.

Catra is a great character and why I kept watching the show. Her skills and interactions with others were always interesting to watch and listen to. I loved her internal and external conflicts, her breakdowns were great and you could tell how much she was struggling. However, I also disapproved of the way she would treat the people around her. She can be really toxic! As to her abilities, she has catlike agility, being able to flip and jump like a cat. Her claws are deadly and she uses them to slice her foes and also to stop herself from falling off the steep surfaces. As for her tail, it seems pretty sensitive. She mainly uses it to balance herself during battle. At other times you can tell her mood by the way she swishes it or brushes it against Adora’s arm.

Which one of these feline warriors is eviler? Cheetah from Wonder Woman or Catra from She-Ra and the Princesses of power?

In Sonic the Hedgehog, Miles “Tails” Prower is a mobile fox with two twin tails which he uses to fly by propelling them like helicopter blades. Hence the nickname “Tails”. Tails are very quick and can race around at high speeds, using his tails in a fan-like motion, allowing him to keep up even with Sonic’s basic cruising speeds. He can also use his tails for defensive and offensive purposes since one quick jab of them packs enough speed and force to slice weeds in two or puncture Dr. Eggman’s robots. Besides his amazing physical abilities, Tails has his laser blaster, which is capable of firing either thin and green or wide and yellow lasers with pinpoint accuracy. The blaster packs enough power to destroy hard steel, or blow up objects.

Rocket Raccoon is a genetically altered creature who is inordinately fond of large firearms. He has impressive fighting skills and enhanced implants in his body. Rocket is characterized as bold, daring, and unbelievably powerful, far beyond his physical size. His weapon of choice is The Laser Cannon which is powered by dual internal ion power cells that allow it to shoot both lethal laser beams and stunning ion pulses through a secondary trigger.

The “Unbeatable Squirrel Girl” is very powerful. Her main powers include enhanced strength and speed, diplomacy, talking to squirrels, and computer science. Early in her career, she also leveraged a lot on her opponents underestimating her, because they didn’t realize how much faster a squirrel is than a spider, and they had never considered how to fight against an army of squirrels before. When you combine that with good old-fashioned determination and a lot of practice, it’s not hard to see how she essentially turned into the Batman of the Marvel universe. Squirrel Girl has a very long and bushy tail that she can use to cover opponents’ eyes or wrap around herself for warmth.

In Avatar movie, Neytiri is a Na’vi native to the Pandora moon. As a Na’vi, Neytiri is 12 feet tall! She is also a very formidable warrior, very skilled with a bow and in close-range combat with her knife. She was able to single-handedly beat a pack of viperwolfes. It looks like Na’vi’s tails are an extension of their spinal cord, meaning Neytiri has control over it. You can tell that she has control because when she’s mad, you see the tail wagging viciously. Or maybe it just got a mind of its own.

Who is likely to collect more nuts in a forest race? Squirrel Girl or Neytiri?

Chizuru Minamoto is a second-year student who appears to be a carefree girl but is actually a thousand-year-old powerful fox spirit. When she transforms into her Kitsune form, she gains fox ears and a fox tail. In her “true” form, Chizuru can discharge powerful blue fox flames.

Wolf spirit vs Fox spirit – which one of these tailed warriors wins in a spirit dog fight? Holo from Spice and Wolf or Chizuru from Kanokon?