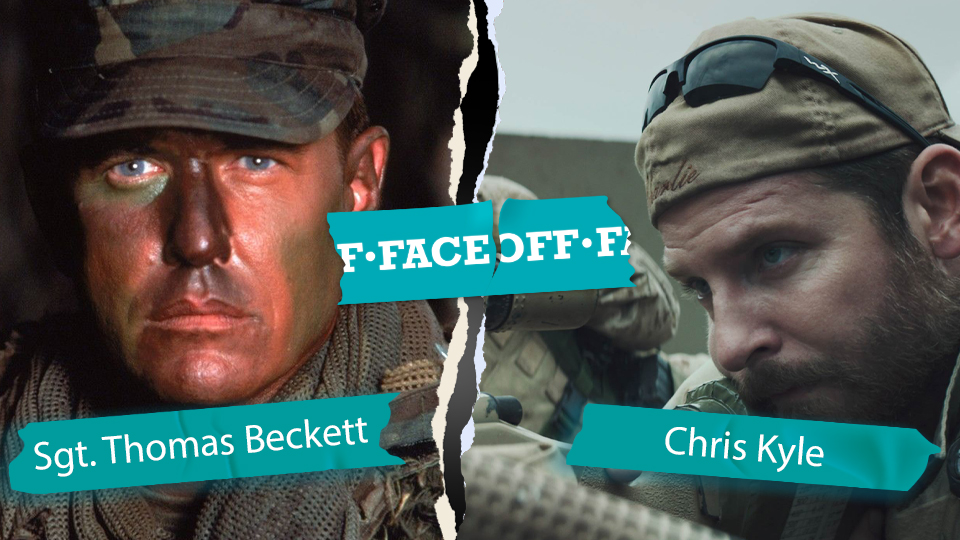 They can take out targets from incredible distances, and you’re going to want them covering you while in battle. On-screen snipers are skilled in stealth, camouflage, infiltration, and observation techniques. Most of them have dozens of confirmed kills. In other words, you really don’t want to be caught in the crosshairs of the sharpshooters in the face-off.

Get to the Top! Anthony Swofford vs Luttrell

Nuclear war is imminent. Unless you take out your target, that is. Which sniper would you choose to scale a snowy mountaintop and shoot down the target’s chopper as it flies by, Anthony Swofford (Jarhead) or Marcus Luttrell (Lone Survivor, movie)?

Day one: Swagger vs Jackson

Listen up rookie, you get to choose one of our top snipers to pair up with before we ship your sorry ass to the front line. Who will it be, Private Daniel Jackson (Saving Private Ryan) or Bob Lee Swagger (Shooter, movie)?

“Listen up maggots, It’s not going to be easy – ” BOOM. You’re commanding officer’s head just got blown to bits by an enemy sniper. Who do you send to take him out, Mike Vronsky (The Deer Hunter) or Alex (Call of Duty – Modern Warfare, video game)?

The door is steel, the house is steel, everything is steel! Except for the peephole, that is. Your sniper will need to be precise. Who would you choose to take the shot while you knock? Lockon Stratos (Mobile Suit Gundam 00, TV series) or Suou Pavlichenko (Darker than black, TV series)?