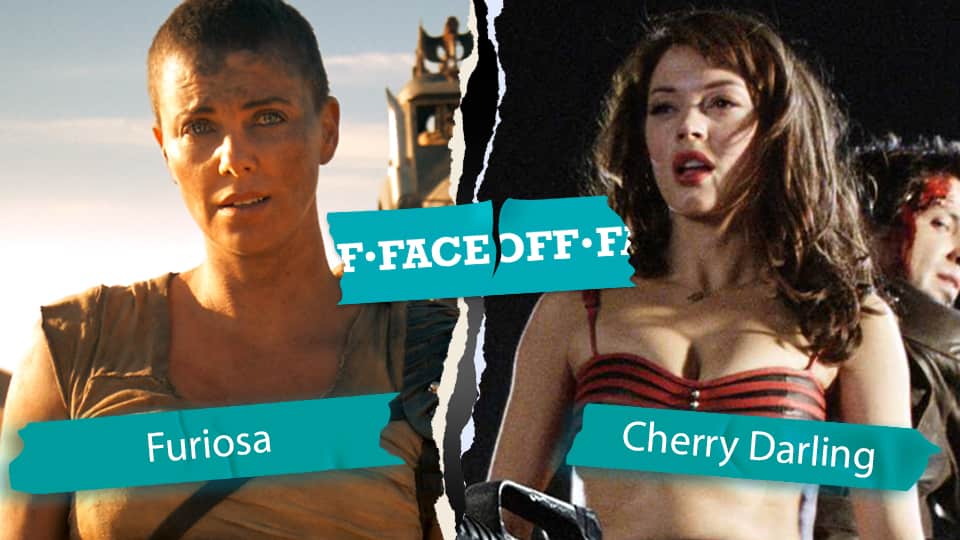 Whether it’s a Plague Apocalypse, Robot uprising, Natural Disaster Armageddon, or Nuclear Holocaust, you’re gonna need some major help if you want to survive it. The world is now swarming with crazed, homicidal, brain-eating zombies. Some of them waddle slowly towards their prey, some are speedy predators, and some just want to live a normal suburban life. In this category, we face off the most memorable post-apocalypse characters to get you through it.

An extraordinary driver, a veteran in wasteland survival, and is an exceptionally talented warrior.

A former go-go dancer and survivor of the zombie apocalypse. Cherry’s leg is torn off by Sickos. She is given a special prosthetic machine gun leg.

Zombies! Zombies everywhere! Which one of these badass Survivalists do you want by your side? Furiosa (Mad Max: Fury Road) or Cherry Darling (Planet Terror)?

Who is more resourceful? Thomas vs Beatrice Prior

The last male Glader and one of the creators of the Maze along with Teresa Agnes.

The trilogy’s heroine, Beatrice is very intelligent. She uses this skill to get herself out of trouble. She is also a very skilled fighter.

You’re stuck in a desert infested with ravenous sandworms (the ‘swallow you whole’ kind). Which of these Survivalists do you choose to help you avoid being worm-fodder? Thomas (The Maze Runner) or Beatrice Prior (Divergent)?

Who wins in a fight to the death? Tank Girl vs Hester Shaw

Originally working as a tank operator and soldier for the Australian, Tank Girl fights very well.

The other main character of the series. Hester is very good at killing people.

It’s a fight to the death! The below Survivalists have been put on a remote island and only one is walking away. Who is the last one standing? Hester Shaw (Mortal Engines) or Tank Girl (Tank Girl)?

Who do you trust to protect you? The man vs Eli

The man (The Road)

An Anti-Hero who will go to great lengths to protect those he loves, even if it means ignoring the plight of other survivors who are likely doomed anyway.

Eli (The Book of Eli)

The closest thing to a religious figure in the post-apocalyptic world. He is a badass warrior that only God can help you if you mess with him.

Alien invasion! As you are led down to a secure bunker it hits you Snowball! Who do you trust to navigate the chaos and turmoil aboveground to bring you your beloved cat? The man (The Road) or Eli (The Book of Eli)?

Who is the better leader? Theo Faron vs Jack Hall

A former activist lost his child and died during a flu pandemic. He manages to make it through an active warzone.

Jack Hall (The Day after Tomorrow)

A Paleoclimatologist who works for the government. Even the blistering cold will not stop him.

Society is doomed! It’s every man for himself and things are getting very violent, very fast. Each of these Survivalists has set up a camp. Who do you join? Theo Faron (Children of Men) or Jack Hall (The Day after Tomorrow)?

Virus outbreaks. Just the combination of the two words is enough to make us shiver after the COVID-19 crisis. But life must go on and so we decided to face off the deadliest global scale infections in fiction ever. We have viruses who will turn people into zombies, vampires, or just flat-out kill them.

Also known as the t-Virus, is the general name given to a series of mutant Progenitor virus strains.

The Krippin Virus (I Am Legend)

Also known as KV, the virus spread out from Manhattan across the globe, killing 5.4 billion people. Of the 600 million who did not die from the virus, only 12 million were naturally immune to KV; the other 588 million devolved into Darkseekers.

The symptoms symptom: The White Sickness vs The Simian Flu Pandemic

The Simian Flu Pandemic (Planet of the Apes)

Commonly known as ALZ-112 and ALZ-113, was an artificially created retrovirus designed to cure Alzheimer’s disease. The first virus proved a success with ape test subjects by greatly enhancing their intelligence, bad news to human society.

An epidemic that causes people to go blind.

One pandemic makes you blind and the other makes you mute. Considering the symptoms, which sickness is worse? The White Sickness (Blindness, movie) or The Simian Flu Pandemic (Planet of the Apes, movies)?

A hemorrhagic virus in the 1995 movie Outbreak. It has a 100% mortality rate and is a VHF (Viral Hemorrhagic Fever) which causes fever and intense bleeding internal and external.

The Black Death was a bubonic plague pandemic, which reached England in June 1348. It was the first and most severe manifestation of the second pandemic.

You have a time machine that can only take you to 1995 Cedar Creek California which suffers from an outbreak of the airborne Motaba or to medieval England in the period of the black plague. You have to choose one destination – Which one will you NEVER choose? Airborne Motaba (Outbreak) or The Black Death Pandemic (Black Death)?

Outbreak: The Cabin Fever Virus vs The Rage Virus

The disease shown in this movie is an infection with a flesh-eating virus.

Also known as (the) Infection, it is a virulent, bloodborne virus that sends its hosts into a state of extreme, uncontrollable rage.

You have a time machine that can only take you to 1995 Cedar Creek California which suffers from an outbreak of the airborne Motaba or to medieval England in the period of the black plague. You have to choose one destination. Which one will you NEVER choose? The Cabin Fever Virus (Cabin Fever) or The Rage Virus (28 Days Later)?

Both viruses managed to wreak havoc across the globe. Which virus is more contagious, Red Fever (Future World) or Solanum (World War Z)?

The Blood Fever was the worst pandemic ever. It was the disease that nearly finished humanity. It is also part of the Apocalyptic era.

Solanum is a fictional virus that turns people into zombies. It is highly infectious, incurable, and gives its transformed victims mysterious properties.