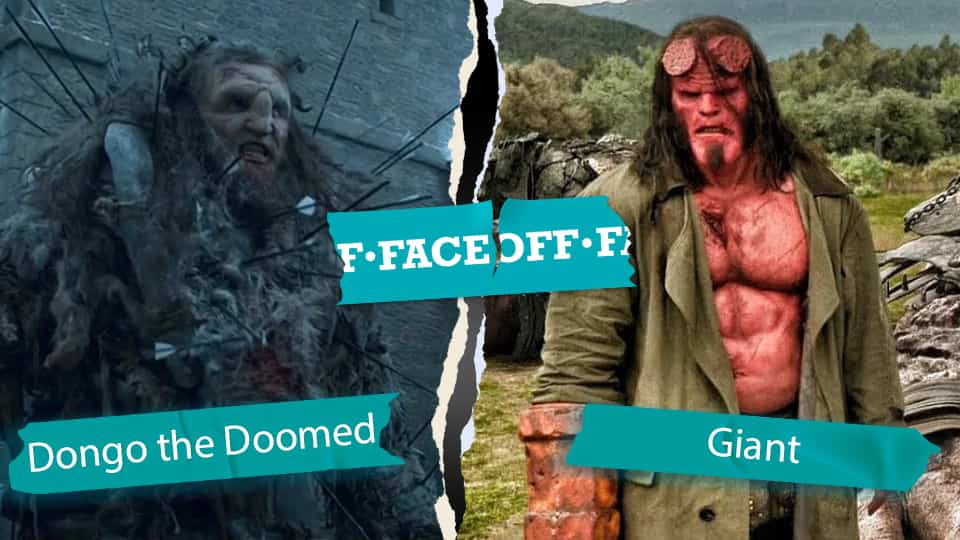 Do you know what’s more interesting than humans fighting humans? Humans fight giant fantastical creatures which can often fit their skulls in the palm of their hands (if they have hands). From orcs to dwarves and trolls, in this category, we list and face off the most powerful creatures of fantasy against each other.

Which Battle Creature would you want in your army of orcs, dragons, and giants? You can comment below on all of these fantasy creatures, and even add your own characters to the list if they’re not already here.

Lurtz, the Uruk hai leader (Lord of the rings)

Lurtz was the first of Saruman’s Uruk-hai to be bred, choking the first Orc he sees to death within seconds of his birth.

“I’ve led thousands of warriors into battle, but I fear being a father. Does that make me a leader or a coward? Durotan : Our hope is destroyed; there is nothing to go back to.”

Battle Scenario: You’ve banded together with an army of creatures and misfits who you need to whip into shape. Who’s the best leader for the job?

The Giants were a race of large humanoids that once walked the Earth.

Dongo the Doomed (Game of Thrones)

Dongo is one of the non-human race of giants who joined the Free Folk army assembled by Mance Rayder, the King-Beyond-the-Wall.

Battle Scenario: Your regiment has received additional funding and you can finally spring for one of those battle creatures you’ve always wanted. Who is the better addition to your forces?

Battle Troll (Lord of the rings)

Trolls were a very large and monstrous, and for the most part unintelligent[1], humanoid race inhabiting Middle-earth.

He doesn’t have a problem with subverting the law but doesn’t like to fight dirty.

Battle Scenario: Having a nemesis can be exhausting and keep you looking over your shoulder constantly. But some are better than others. Who makes a more tedious nemesis to have?

“The Putty Patrollers will make space dust out of those kids! And the beauty is, if they don’t, we can always make more. Now into the Monster-Matic they go. Ten seconds should do it.”

Balthazar is a Tree Warrior who announced Maleficent’s parents’ deaths to the fairies. He is one of the guards who apprehends young Stefan attempting to steal from the Moors and later helps Maleficent defeat King Henry’s army.

Battle Scenario: Having a nemesis can be exhausting and keep you looking over your shoulder constantly. But some are better than others. Who makes a more tedious nemesis to have?

Nick Jakoby is a formerly bloodless Orc and an officer with the Los Angeles Police Department.

Gimli (Lord of the Ring, movies)

“Those were happier days, when there was still close friendship at times between folk of a different race, even between Dwarves and Elves.’ It was not the fault of the Dwarves that the friendship waned.’”

Battle Scenario: Things are quiet and you can finally kick back and enjoy a nice cold beer. Which of the below do you prefer to hang out with?

No army is complete without an aggressive air force to provide air superiority, surveillance, and rapid global mobility. We’re not talking planes and choppers though, this is for dragons, super-eagles, winged horses, and other fantastical creatures. They can breathe fire, transport fighters, and devastate your opponent, in this category we face off the most useful aerial creatures for tactical dominance.

Large, dragon-like aerial predators that are native to Pandora. They are used by the Na’vi for hunting from the air and traveling larger distances. Ikran are also used in battle, where the mount attacks its opponents from the air.

Thestrals were, undeservedly, known as omens of misfortune and aggression by many wizards because they were visible only to those who had witnessed death at least once or due to their somewhat grim, gaunt and ghostly appearance.

Battle Scenario: Some people see them as tools of war but you see them for what they really are–cute cuddly flying critters, and you can pick one as a pet! Who do you choose?

Thorondor, the Lord of the Eagles, was the greatest of the Eagles of Manwë king of the Valar. It is said that Thorondor had a wingspan of thirty fathoms.

7. Rodan vs The Lord Of the Eagles

Battle Scenario: As the general of the army, you need to choose a beast to ride while leading your troops into combat. Which do you choose?

A fire-drake of the Third Age, considered to be the last “great” dragon of Middle-earth.

Drogon is one of the three dragons born in the wastelands beyond Lhazar, along with his brothers Rhaegal and Viserion.

Battle Scenario: If you’re going to go into combat, you can’t worry that the creature by your side will eat you whenever you let your guard down. Who is more trustworthy Smaug or Drogon?

The largest, most powerful, and intelligent of the dragons, presumably the only male of them all.

9. Draca vs The Male Dragon

Battle Scenario: You finally have your enemies cornered but they’ve managed to put up one hell of a wall. That will need to come down. Fast. Who do you choose to swoop in and take it down?

Fellbeasts (Lord of the Rings)

Also called hell-hawks and Nazgûl-birds, were the flying creatures on which the Nazgûl rode after being unhorsed at the Ford of Bruinen.

A species of dragon creature emerged during the global T-virus pandemic. They are referred to by Albert Wesker and Dania Cardoza as “Infectors”.

Battle Scenario: While hiking in the forest you hear a shriek just past the ridge. Actually, It’s more of a roar, and it’s getting closer. Which creature are you more scared of facing?

Monsters of the Deep

The oceans cover 71 percent of the Earth’s surface. A giant kingdom indeed, swarming with mysterious creatures and unknown species. Some films have shown just what happens when some of these creatures are discovered–and it usually doesn’t end well. This category faces off the biggest, badass underwater horrors.

Percy’s half-sister, as they are both children of Poseidon, and she would also be Percy’s great-aunt for Gaea is Kronos’ mother.

She has guarded the Trident of Atlan in the Hidden Sea for millennia, and later assists Aquaman with his quest to prevent war

Battle Scenario: A giant sinkhole has opened up right outside your house! One of these beasts is just waiting for you to peek in. Which one are you more scared of will emerge?

Species of fearsome and extremely massive prehistoric sharks who terrorize anything that stands in their way. The Megalodon is the biggest carnivorous fish that has ever lived on Earth.

Battle Scenario: You’re on the run with one of these creatures right on your tail! Which one are you less likely to outsmart?

An enormous crocodile kaiju appeared in the 2018 monster movie Rampage.

Cthulhu has been reinterpreted and simplified as a very large organism and has no known supernatural powers, sapience, or extraterrestrial origins.

Battle Scenario: As a proud anarchist, you can finally unleash chaos on the lifeblood of the government–Wallstreet! Which monster do you unleash to cause as much mayhem as possible?

“Lurks in rivers and streams and will kneel in invitation for anyone to ride it across. If this is attempted, the Kelpie will drag the rider underwater and attempt to eat them.”

The Hydra is a large, multi-headed serpent. It’s the first monster Hades uses as a fixed contest to destroy Hercules.

Battle Scenario: Finally, your minimizing technology is complete! Which monsters do you use it on and take home as a pet?

Kraken (Clash of the Titans)

A giant sea monster of tremendous size and strength

“The Mosasaurus was thought to have hunted near the surface of the water, where it preyed on anything it could sink its teeth into, including turtles, large fish, even smaller mosasaurs.”

Battle Scenario: Your incredible psychic powers can allow you to control one of the beasts below. Who do you choose to be your lackey?