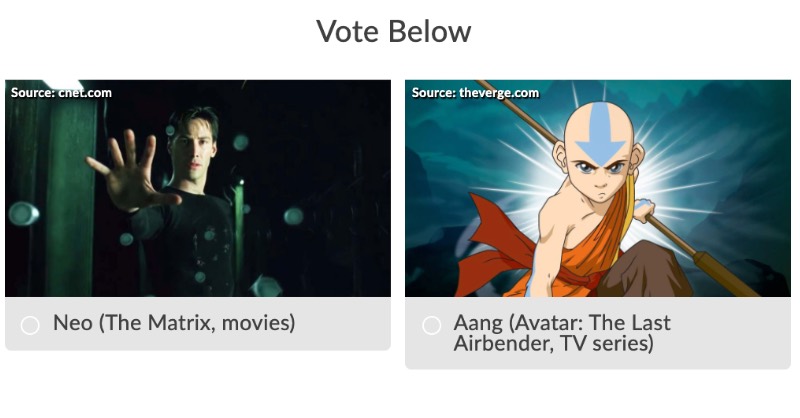 They were born to save us all. Chosen for a greater purpose. To do what is intended of them. To embrace the role. The chosen one is usually a person with special talents or gifts or someone who has been marked by a prophecy or by a deity to perform a certain heroic task. When the world needs a champion, it is time for him or her to rise up and vanquish the threat, because no one else can do it. Here is the most iconic chosen one in fiction history facing each other in a fight to the death!

No doubt these two chosen ones are blessed with a really wide set of special skills. Who would win if they fought each other to the death, morals off? Neo (The Matrix, movies) or Aang (Avatar: The Last Airbender, TV series)?

One was prophesied to bring balance to the Force and the other was born with the power to vanquish Lord Voldemort. Who would win if they fought each other? The famous Jedi Skywalker or Potter?

One was chosen as the champion of good for possessing a pure heart and the other was born to bring forth the apocalypse. Which one of these mighty heroes would win in a hand-to-hand battle? Shazam (Shazam, movie) Hellboy (Hellboy Movies)?

They were both young girls when they embraced their destiny to fight evil. Who would win if they fought each other?