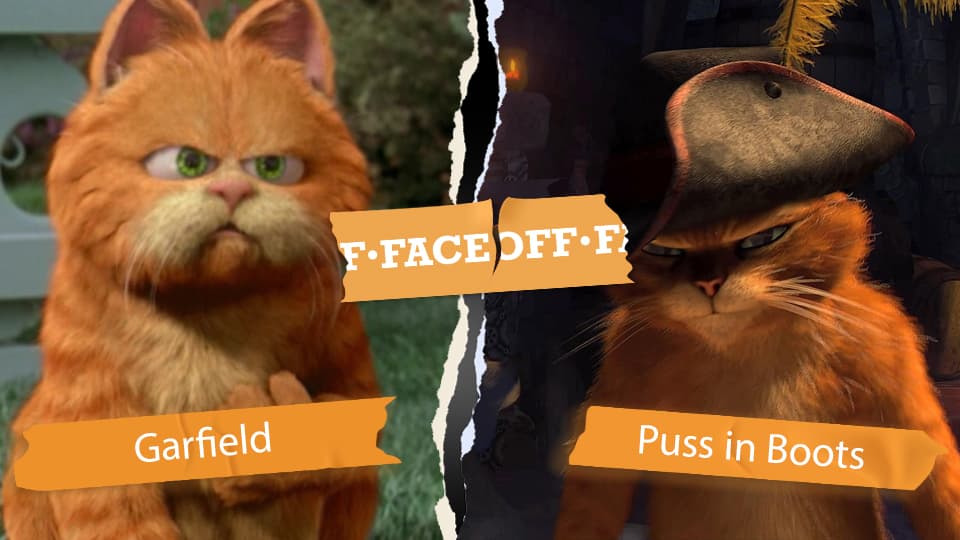 Meow! Though they pretend not to care a whit—because, you know, cats—what would movies and TV shows be without that feline air of superiority? Cats have occupied essential roles in some of our favorite fiction works and in this category we’re going to say thanks by facing off the most iconic kitties ever.

Vote for your favorite characters below

Some people say that dogs are better than cats for home protection. Well, they haven’t met these cats! Which do you take to keep intruders out?

Garfield vs Puss in Boots

You’ve finally convinced your parents to get a cat! You go to the vet and see both of the below. Who do you adopt?

People usually go for cats because they’re low maintenance, but that’s not always true. Which of the below is more frustrating to have as a house cat?

You’re closer than ever to becoming a supervillain, the only thing you need so that people will take you seriously is a cat! Which do you choose?

Jonesy from Alien vs Lucky the Cat

Some cats are just as chill as a cucumber, Aliens, blood, puppets, literally, nothing can phase them. But who is the most chill of them all?

Whether man-eating lions or good-natured panthers, big cats have occupied important roles in some of the most memorable stories in fiction. This category is for the most ferocious (and kind) feline predators out there.

Your forces are gearing up for war! You can select one of the below to follow you into combat. Who do you choose?

Shere Khan from Mowgli: Legend of the Jungle vs Richard Parker from Life of Pi

Only one of these two tigers will go down in movie history as the most memorable on-screen tiger. Who do you think it is?

You’ve been turned into a rabbit! Bad timing too because both of the below are circling your house. Who do you try to get past?

You want to make it as hard as possible for the hero of your story to survive. Who do you put him up against?

Alex from Madagascar vs Raja from Aladdin

Your parents have finally come through with their promise to get you a pet! Which of the below do you choose?

Known these days as dogs, puppies, or just ‘dogs’ (never dawgs), man’s best friend is a constant real-life obsession, which is why it’s no surprise to see them time and time again on screen. They accompany us on our adventure and protect us from our adversaries or have their own adventures around the world. In this category, we face off the most beloved canines in fiction.

The cat next door is really pushing it. Which one of the below is more likely to give it a taste of his teeth?

There are incredible examples of the loyalty dogs have shown to their human friends. But some dogs are just more loyal their others. Who is more loyal?

Corellian Hound from Solo: A Star Wars movie vs Hellhound from Riddick

We are totally against blood sports, but, theoretically, which of the below wins in a fight?j

Krypto from Titans vs K-9 from Doctor Who

You are about to embark (bark, get it?) on a galaxy-saving adventure. who do you choose as a companion?

Dug from Up vs Ren Hoek from Ren and Stimpy

Only a few dogs have their minds set on world domination. Which one of these canines has a better chance of achieving it?