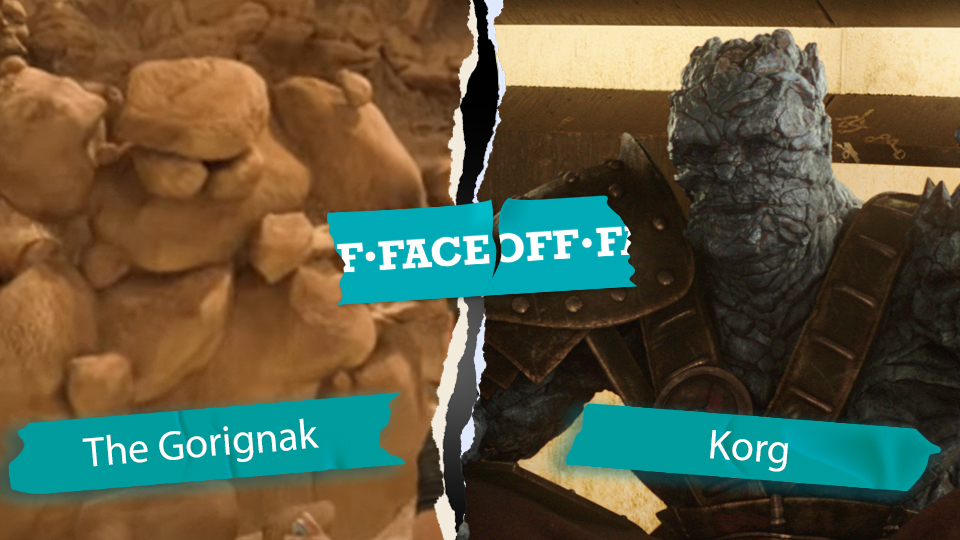 At first glance, they may seem like a meaningless pile of rubble but looking closer will reveal a face and consciousness…Not too close though or you might get crushed! These creatures have a rock-hard exterior which is usually accompanied by super strength, durability, and a very short fuse. In this poll, we face off the 10 boulder warriors that can crush, smash, and bash their opponents with overwhelming force.

The Thing vs Crusher

It’s high noon at the colosseum and these two rock-hard gladiators are about to face each other. Who wins and who suffers a rockslide defeat? The Thing (Fantastic Four) vs Crusher (Fade to Silence, video game)

Apparently, you can pay less for home insurance if you have a dog, alarm system, or a killer rock placed out front. Your choice is obvious. Which of the below do you choose? Korg (Thor: Ragnarok, movie) or The Gorignak (Galaxy Quest, movie)?

It’s the final round in the world rock-throwing championship. Who wins?

Pyornkrachzark (The NeverEnding Story, movie) vs Stone Talus (The Legend Of Zelda Breath Of The Wild, video game)

You’re putting together a team of superheroes…or supervillains (you’re still undecided). Either way, which of the below do you pick to join the group? Pyornkrachzark (The NeverEnding Story, movie) or Stone Talus (The Legend Of Zelda Breath Of The Wild, video game)?

You want to scare the bejeebies out of that third-grade class heading into the mountain for a field trip. Which of the below do you place throughout the mountain? Genbu (Yu Yu Hakushu, anime series)or Mr. Arrow (Treasure Planet, animated movie)