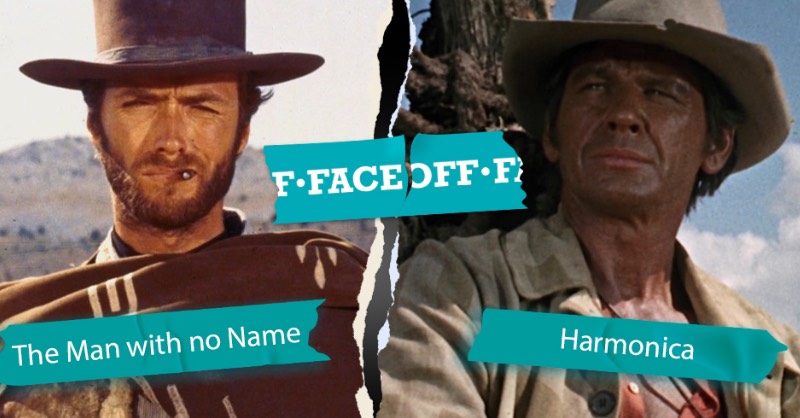 The list of legendary gunslingers in western films who can pull out their firearm and hit their target before you can say knife includes some unforgettable performances by Val Kilmer as Doc Holiday, John Wayne as Ringo Kid, Robert Redford as Sundance Kid, Russell Crowe as Ben Wade, and many more. But who is the ultimate gunslinger in western films? The one that is likely to beat any opponent that will dare face him in a showdown? For this Faceoff, we chose two of the most famous and skillful gunslingers to ever grace the silver screen. Two mysterious strangers who are nearly damn invincible when they hold a gun in their hands and who have forever left their mark on our hearts. The Man with No Name vs. Harmonica.

The Man with No Name vs. Harmonica

The Man with No Name

In 1966 The Good, the Bad and the Ugly came out, featuring the third and final appearance of Clint Eastwood as the Man with No Name. AKA “Joe”, “Manco”, and “Blondie” the Man with No Name are the stuff that legends are made out of. He’s a tough bounty hunter, drifting from place to place looking to score a handful of dollars, usually taking care only of his own personal interests. The Man with No Name was unlike anything we have ever seen before. Eastwood presented audiences with a new type of hero, poles apart from the traditional cowboy movie, a hero who does unspeakable things, like double-crossing his partner and abandoning him horseless and waterless in the middle of a desert.

The Man with No Name’s stoic attitude and his ability to always come out on top, even when confronted with superior numbers, made him popular among millions of moviegoers. Eastwood’s hero is a man of few words, but when he does speak, he brings some of the best lines in film history, like: “There are two kinds of people in this world, my friend: people with guns and people who dig. You dig.” No wonder the Man with No Name is possibly the most iconic figure of the western genre.

Once Upon a Time in the West is another masterpiece in the western movie genre. Released in 1968 the film introduced us to a nameless harmonica-playing gunman, portrayed by Charles Bronson, who is later dubbed “Harmonica”. Right in the first scene, this tough stranger outdraws three professional gunfighters who were sent to kill him. But Harmonica’s greatest moments come not only in gunfights but also with words said prior to wasting a villain. When asked who he is, Harmonica never gives his name but instead states the names of men that his target has killed before, culminating with one last reminder of the villain’s past misdeeds when he finally guns him down.

Although Harmonica says little, when he is addressed he gives great comebacks, like when one of the three hitmen laughs and tells him that they brought only three horses and shy one horse (meaning, the horse Harmonica presumed that they should have brought him), Harmonica shakes his head and answers: “You brought two too many” (meaning, he is about to kill the three of them and take one of their horses for himself).

Battle Report Final Results: The Man with No Name vs. Harmonica Who Wins?

So, who is our pick for the greatest gunslinger in western history?

The Man With No Name Wins!